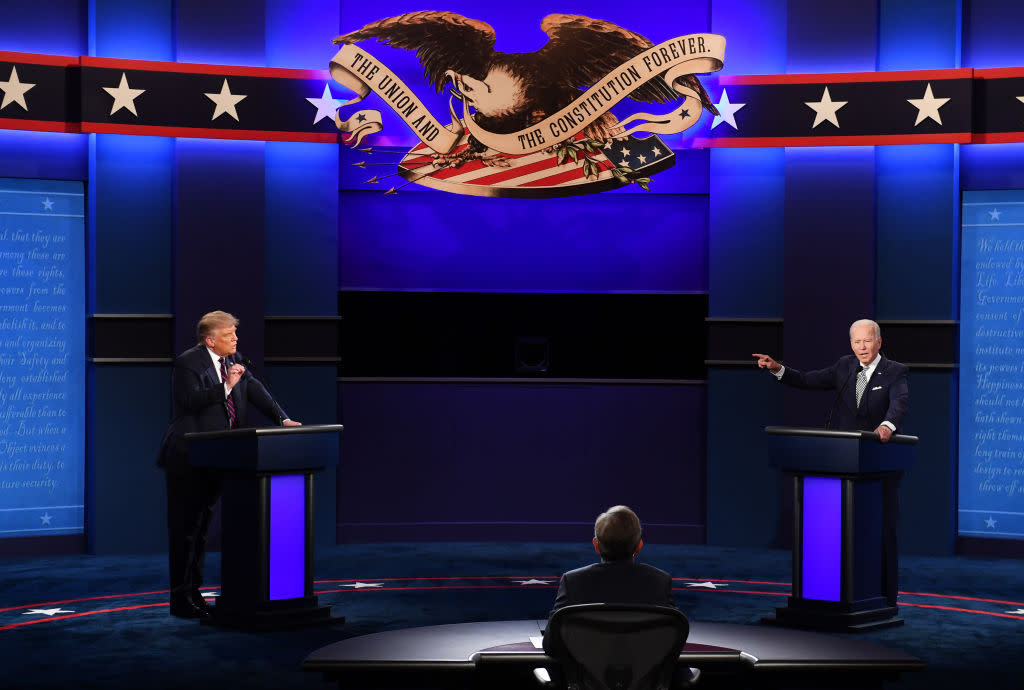 Few things are more important in the U.S. right now than clarity and truth on the coronavirus pandemic that has killed more than 200,000 Americans and remains a threat to the lives and health of millions. Unfortunately, Tuesday night’s presidential debate in Ohio, hosted by the Cleveland Clinic, was rife with falsehoods about the nature of the disease, the fight against it and what comes next.

Who is in danger?

In discussing how and when the economy will recover from the deadly pandemic, President Donald Trump made sweeping claims about the type of people who tend to contract COVID-19. “We had to [shut down the economy] because we didn’t know anything about the disease, now we found that elderly people with heart problems and diabetes and different problems are very, very vulnerable,” he said. “We learned a lot. Young children aren’t, even younger people aren’t.”

It is true that people with underlying conditions, or comorbidities, tend to get seriously sick and die from COVID-19 at higher rates than those who are young and otherwise healthy. According to research affiliated with the Department of Health and Human Services and published on the Centers for Disease Control and Prevention (CDC) website, a majority out of a sample of 10,647 who died from the virus were 65 or older, and most had underlying health conditions.

But this same data indicates that 30% of non-white coronavirus fatalities and 35% of Hispanic fatalities were under 65, while 13% of white, non-Hispanic fatalities were under that age. Further, while children have not faced severe symptoms of COVID-19 as often as older populations, the CDC has published guidance indicating that children who likely encountered the virus in daycare facilities then transmitted COVID-19 to their family members, and potentially adult childcare workers. Some scientists and doctors also believe that the virus has caused children to contract something called “multisystem inflammatory syndrome”—which can coincide with inflammation of the heart, lungs, kidneys, brain, skin, eyes, and gastrointestinal organs, and has caused at least 19 deaths.

Trump said he only wears a mask himself “when I think I need it,” and claimed that some public health experts including Anthony Fauci have questioned the effectiveness of mask wearing.

In fact, all top public health experts now agree that wearing masks is enormously important and effective in slowing the spread of COVID-19. “Face masks, these face masks, are the most important, powerful public health tool we have,” CDC Director Robert Redfield said in Congressional testimony in September. “I might even go so far as to say that this face mask is more guaranteed to protect me against COVID than when I take a COVID vaccine,” Redfield added.

Anthony Fauci, director of the National Institute of Allergy and Infectious Diseases, and other health experts did recommend against wearing masks in the early days of the pandemic amid fears about shortages for health care workers, but that guidance was updated in the spring. Now Fauci, like other public health experts, recommends “universal wearing of masks” as a key factor in curbing the pandemic.

Vice President Joe Biden has been much more scrupulous about mask-wearing than Trump. Trump rarely appears in a mask in public, and Trump has been holding large outdoor rallies with no social distancing and inconsistent mask wearing among the attendees. Ohio, where the debate was held, is currently under a statewide mask order and all individuals are required to wear masks indoors when they aren’t at home.

Black Americans have been disproportionately hurt by the coronavirus pandemic. Right now, Black Americans account for 20.9% of all deaths from COVID-19, according to the CDC. That percentage means that 43,000 of the total 205,000 U.S. coronavirus-related deaths have been Black people. With 43.9 million Black people in the United States, according to July 2019 population estimates, that means the rate of death from COVID among Black Americans is about 1 in 1,022. That is a massive and tragic number.

But in order for the virus to have killed 1 in 500 Black Americans by the end of the year, the death rate would have to spike catastrophically. The total number of American deaths would have to double in the next three months, or the percentage of Black people dying would have to increase many times over.

The percentage of Black deaths reported by the CDC may end up changing because data on race is unavailable for many deaths, but it is extremely unlikely that the ultimate percentage is high enough to make Biden’s statistic true.

Black Americans also face numerous barriers to health care even in normal times, and studies have shown that systemic racism in America’s health care system can lead to worse health outcomes. But even with all of these considerations, there is no evidence to back up Biden’s projection.

When will a vaccine be available?

Responding to criticisms of his handling of the global pandemic, Trump boasted a long list of supposed wins. “The governors said I did a phenomenal job, most of them said that, in fact, people that would not be necessarily on my side, said that President Trump did a phenomenal job. We got the gowns, we got the masks. We made the ventilators,” he said. “And now we’re weeks away from a vaccine.”

Several of these claims are dubious: Personal protective equipment is still hard to come by—even among medical professionals. Some medical staff continue to reuse N95 respirator masks for weeks if not months. But even his own team disputes the truth of Trump’s claim that America is “weeks away from a vaccine.”

Some in his Administration have claimed that certain high-risk groups, like medical providers, could be vaccinated at the end of this year if vaccine trials progress seamlessly. But Dr. Moncef Slaoui—one of the top scientists working on Trump’s vaccine initiative—asserted it was “extremely unlikely” a vaccine would be ready by October or November. Slaoui added that it would likely take until “the middle of 2021” to vaccinate the whole U.S. population. Redfield also testified this month that a vaccine would not likely be widely available until next spring or summer.