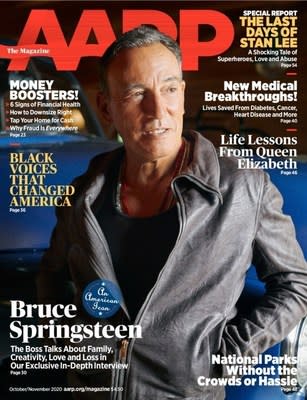 Inside the October/November Issue of AARP The Magazine: Exclusive Interview with Bruce Springsteen on Love, Loss, Aging and New Album “Letter To You”

PLUS Drew Barrymore opens up; Al Roker focuses on family; The final days of Stan Lee

WASHINGTON, Sept. 29, 2020 /PRNewswire/ — Inside the October/November issue of AARP The Magazine (ATM) is a heartbreaking six-part account on the alleged elder abuse of the Marvel Comics visionary Stan Lee, an exclusive interview with music legend Bruce Springsteen, exciting 2020 medical breakthroughs to celebrate in the midst of the pandemic and an interview with Drew Barrymore on her next role as a daytime talkshow host. Plus, a spotlight feature on influential black voices including Harriet Tubman, W.E.B. Du Bois and Langston Hughes, whose words continue to inspire change and justice.

In this issue of AARP The Magazine:

Cover Story: Bruce Springsteen
The 71-year-old artist welcomed AARP The Magazine to his home and horse farm in New Jersey for a conversation on his career, family, marriage, friendships, new album and more.

What I Know Now: Drew Barrymore
With nearly four decades in the spotlight, the “E.T.” star ventures into her newest role as a daytime talk show host. Barrymore opens up to AARP The Magazine about her life in 2020: health, motherhood, quarantine, becoming wiser and more mature and more.

Royal Life Lessons
At 94, the world’s longest-reigning royal still follows ten rules for staying vital, according to the author of a new book, Long Live the Queen. AARP The Magazine reveals the secrets of Elizabeth II, the indomitable 94-year-old monarch.

The Last Days of Stan Lee
As we approach the second anniversary of the death of Marvel mastermind, Stan Lee, AARP The Magazine dives into the heartbreaking final years of one of Hollywood’s greatest character creators. Why was he signing autographs at so many public appearances well into his 90s? ATM investigates the truth behind his large team of advisors and the elder abuse that many believe occurred.

Medical Breakthroughs 2020
While 2020 has exposed the cracks within the broken national health system, AARP The Magazine takes an optimistic look at some exciting medical breakthroughs that are already saving lives. New treatments for breast cancer, prostate cancer, macular degeneration, heart disease, lung disease and more are amongst this year’s medical wins.

The Other Epidemic
The pandemic, the economy, politics and concern about our families have put nearly every American into a heightened emotional state, notes fraud columnist Doug Shadel. And that is exactly how scammers want us; no wonder consumer fraud has risen during the pandemic to arguably its highest level ever. Shadel explains the psychology of fraud and gives advice on how to protect yourself in these fraught times.

National Parks
Many Americans have been working from home for over six months and desperately need a change of scenery. For those who want to get away and also stay safe, AARP The Magazine has the adventurers’ ultimate guide to national parks, highlighting nine less-traveled but incredibly beautiful national parks to visit on your next road trip.

Personal Best: Al Roker
Longtime TODAY Show anchor, Al Roker, opens up to ATM about how quarantine has given him invaluable bonding time with his 18-year-old son Nick, who is on the autism spectrum. The duo has created a regular IGTV series called “What We’re Cooking,” where they share their favorite recipes, grilling tips, advice on what to do with Sunday leftovers and more. “I’m so proud of the person Nick is becoming, and so glad I have this extra time to see him maturing into an adult,” says Roker. “He’s self-sufficient, and he’s stretching into new areas. He’s enjoying life and seeing he can do different things.”

About AARP
AARP is the nation’s largest nonprofit, nonpartisan organization dedicated to empowering people 50 and older to choose how they live as they age. With a nationwide presence and nearly 38 million members, AARP strengthens communities and advocates for what matters most to families: health security, financial stability and personal fulfillment. AARP also produces the nation’s largest circulation publications: AARP The Magazine and AARP Bulletin. To learn more, visit www.aarp.org or follow @AARP and @AARPadvocates on social media.