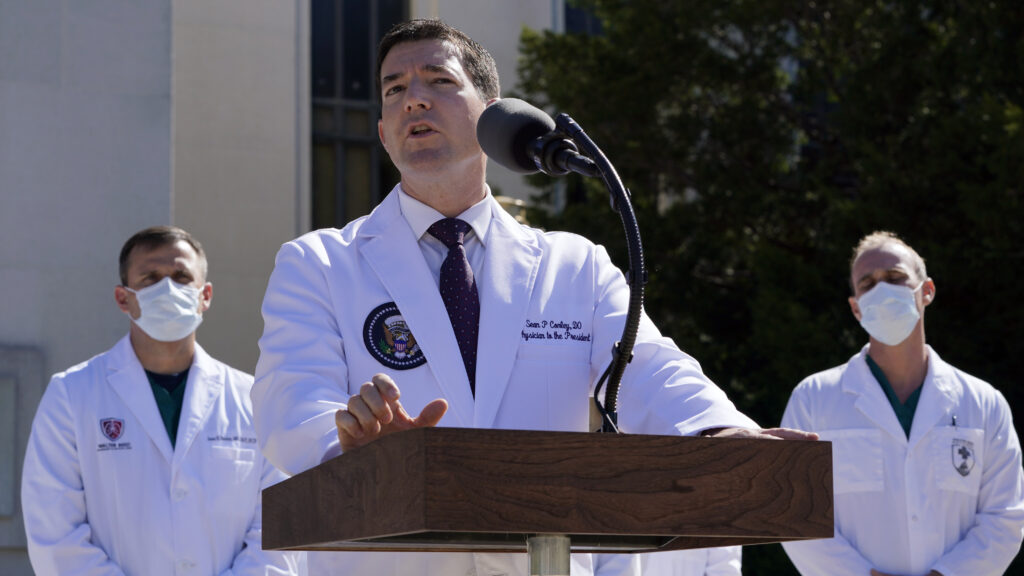 A Saturday briefing by President Trump’s medical team meant to provide an update on his condition only added confusion to the timeline around his Covid-19 diagnosis and when interventions have been provided.

Trump announced on Twitter early Friday morning that he had tested positive for the virus, and it had seemed that he was tested following news that his aide Hope Hicks, who started feeling sick Wednesday, had Covid-19. Trump told Fox News Thursday evening he had just heard about Hicks’ infection and tweeted that night he was awaiting test results.

But the president’s physicians said during the briefing outside Walter Reed National Military Medical Center Saturday morning that Trump was 72 hours into his diagnosis and indicated that he started treatment on an experimental antibody cocktail from Regeneron Pharmaceuticals 48 hours ago — which would have been Thursday morning. But Sean Conley, the president’s physician, also stated that there was not confirmation of Trump’s infection from a PCR test until late Thursday night.

In a statement a few hours after the briefing, Conley said the information at the briefing had been incorrect. When he said 72 hours, he meant Trump was on his third day of his diagnosed illness, with the confirmation coming Thursday night. And similarly, Trump was on his second day of the antibody cocktail, so it was begun Friday.

During the briefing, the doctors overall painted an image of Trump in good health. “The team and I are happy with the progress he has made,” Conley said. But soon after the briefing ended, a report from the White House pool reporter was sent out that described a source familiar with the president’s health saying, “The president’s vitals over the last 24 hours were very concerning and the next 48 hours will be critical in terms of his care. We’re still not on a clear path to a full recovery.”

It was a jarring message given that the doctors had just described how the president had not had a fever for over 24 hours, and that the mild cough, nasal congestion, and fatigue he experienced Thursday were resolving. Trump’s most recent oxygen saturation level was 96% — a healthy reading — and his heart, kidney, and liver function were all normal, the doctors said.

Conley said he recommended Trump on Friday go to Walter Reed for “state-of-the-art monitoring any any care that he may need.” Conley noted that although Trump seemed to be making progress, “the first week of Covid, and in particular days seven to 10, are the most critical in determining the likely course of this illness.”

Conley wouldn’t answer specific questions, however, about what temperature Trump reached when he had a fever, nor would he say when the president had last tested negative. He danced around whether and when the president had received supplemental oxygen, repeatedly saying he was not on oxygen “right now” and later adding, in response to a reporter’s question, that Trump hadn’t received any oxygen on Friday “with the team, when we were all here,” apparently meaning at Walter Reed. The New York Times reported Trump was given oxygen Friday at the White House because he was having trouble breathing, and that prompted his transfer to the hospital.

On Friday, the doctors said, Trump started on a five-day course of the antiviral remdesivir. There has been some speculation that Trump’s symptoms must be more concerning if doctors were trying both the antibody cocktail and remdesivir at this point in his illness, but other doctors noted that if the therapies are going to be effective, they’re more likely to work if given early in the course of the illness.

“Remdesivir works a little bit differently than the antibodies. We’re maximizing all aspects of his care,” Conley said, describing the strategy as a “multipronged” approach. “It’s the president. I didn’t want to hold anything back.”