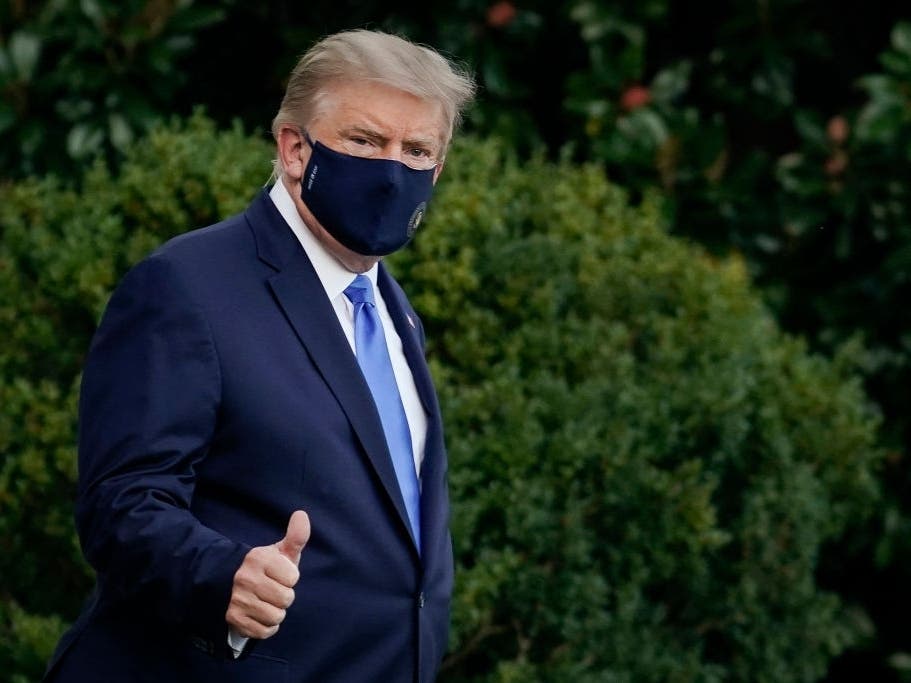 WASHINGTON — White House doctor Sean Conley walked back comments made at a news briefing outside of Walter Reed Medical Center on Saturday, during which he said President Donald Trump is doing well 72 hours into his COVID-19 diagnosis.

Speaking to reporters earlier in the day, Conley said the president had been fever-free for 24 hours and was having no difficulty breathing or walking around. Conley also said Trump was in “exceptionally good spirits.”

Conley’s rosy outlook on the president’s health contradicts an account included in a White House pool report Saturday in which an anonymous source “familiar with the president’s health” said, “The president’s vitals over the last 24 hours were very concerning and the next 48 hours will be critical in terms of his care. We are still not on a clear path to a full recovery.”

According to The Associated Press, Trump chief of staff Mark Meadows echoed the pool report prognosis, telling reporters outside the White House on Saturday that the president went through a “very concerning” period Friday and the next 48 hours will be critical in terms of his care.

Earlier at Walter Reed, Conley was evasive in answering certain questions. He stayed mum on the president’s vitals, whether he had received supplemental oxygen and when he last tested negative for the virus.

Conley was also questioned on the timeline of Trump’s diagnosis.

Though Conley said Trump was “72 hours into his diagnosis,” Trump announced he tested positive for the virus around 1 a.m. Friday morning, or less than 36 hours ago.

Trump was taken to Walter Reed on Friday out of an abundance of caution for his illness. The president’s medical team confirmed he was receiving a course of treatment of remdesivir while there.

While at the White House, the president received an experimental antibody cocktail developed by the biotech company Regeneron, according to an earlier memo from Conley. Trump is also taking vitamin D, zinc, melatonin, a daily aspirin and famotidine (an antacid better known as Pepcid), the memo said.

Conley added that Trump was first diagnosed with COVID-19 on Thursday and received the Regeron’s antibody cocktail on Friday.

Despite conflicting reports, the president tweeted from the hospital Saturday, praising the staff at Walter Reed.

“Tremendous progress has been made over the last 6 months in fighting this PLAGUE,” he added. “With their help, I am feeling well!”

While the president remains at Walter Reed, new coronavirus cases continue to emerge among senators, the president’s aides, and other top political allies.

“I just received word that I am positive for COVID-19,” Christie announced on Twitter. “I want to thank all of my friends and colleagues who have reached out to ask how I was feeling in the last day or two.”

Conway, Stepien, the senators and Trump himself were all in attendance at the ceremony naming Amy Coney Barrett as the president’s nominee to the Supreme Court. The event was held outdoors, but attendees sat closely together and few wore masks. Some also mingled at a smaller event inside the White House.

The president and first lady Melania Trump were experiencing mild COVID-19 symptoms Friday, hours after announcing they had tested positive. Trump confirmed their test results on Twitter late Thursday night, saying he and the first lady were in quarantine.

“Going welI, I think! Thank you to all. LOVE!!!” the president wrote in his first tweet from Walter Reed Friday night.

Trump was moved to Walter Reed Medical Center early Friday evening out of an “abundance of caution,” but the quick change in treatment locations has raised questions about his condition.

News outlets showed video of the president walking to Marine One unassisted. He was wearing a blue suit and a mask. He gave a thumbs-up but took no questions. It was the first view of Trump since before he announced he had tested positive.

Only hours earlier, officials had reported Trump was quarantined and still working within the White House.

Trump also recorded a brief video that was released by the White House just after he left for Walter Reed, saying he was doing fine but was headed to the medical center to make certain his recovery is successful.

Aides said Trump was fatigued and running a slight fever; however, his relocation to a medical center indicated an increased level of concern for the president’s health.

Questions have been raised over what would happen should the president’s illness take a more serious turn. Under the 25th Amendment of the U.S. Constitution, the president himself — or the vice president with the agreement of eight Cabinet officers and the support of Congress — can ask the vice president, in this instance Republican Mike Pence, to take over as acting president.

Prior to Trump’s departure for Walter Reed, White House officials said there would be no transfer of power, CNN reported.

Just hours before announcing his diagnosis, the president attended a fundraising dinner in New York and another at his golf club in Bedminster, New Jersey. While there, the president was in close contact with dozens of people, including campaign supporters.

He did not wear a mask, officials told The Washington Post.

Biden, Trump’s Democratic opponent in the Nov. 3 general election, said Friday that he and his wife have both tested negative for the virus.

However, public health officials in Cleveland, where Trump and Biden debated Tuesday, are aware of at least 11 positive coronavirus cases related to the setup and planning for the event, the city said in a statement, and are working with state and federal officials to interview those involved.

Most of those cases involved people from out of state, and health officials are looking into their travels and doing contact tracing, the city said.

The vice presidential debate between Pence and Kamala Harris, Biden’s running mate, is still on schedule for Wednesday in Salt Lake City. Harris also tested negative for the virus Friday.

Pence’s physician said in a memo that the vice president didn’t have “close contact” with anyone infected with the virus and was not required to quarantine.

While Biden confirmed on Twitter that he and his wife tested negative for the virus, both will have to go through frequent testing given the virus’s incubation period of up to two weeks.

Trump and Biden did not shake hands during the debate but stood without masks about 10 feet apart for the 90-minute event.

Biden also said Friday that he and his wife “send our thoughts to President Trump and First Lady Melania Trump for a swift recovery.” In a Friday morning tweet, he added, “We will continue to pray for the health and safety of the president and his family.”

The president and his wife are now among the nearly 7.3 million Americans who have tested positive for the virus. More than 208,500 Americans have died.

For months, Trump has downplayed the severity of the virus.

New Jersey Gov. Phil Murphy said in a statement that contact tracing is underway to determine if anybody was exposed or infected at the Bedminster event.

“We urge everyone who attended yesterday’s event in Bedminster to take full precautions, including self-quarantining and getting tested,” Murphy said.

The president’s diagnosis comes after months of his downplaying of the virus, its severity, and the importance of wearing masks.

At the presidential debate in Cleveland, Trump openly mocked Biden for wearing a mask.

“I don’t wear masks like him,” Trump said of Biden. “Every time you see him, he’s got a mask. He could be speaking 200 feet away from me, and he shows up with the biggest mask I’ve ever seen.”

The president and his family were tested after it was announced that top White House aide Hope Hicks tested positive for the virus. Hicks attended the first presidential debate on Tuesday.

On Wednesday, Hicks boarded Marine One along with the president and his son-in-law Jared Kushner and other Trump advisers. None wore masks, and hours later, Hicks reported symptoms of the coronavirus, according to CNN.

Four of Trump’s children opted not to wear masks Tuesday evening in Cleveland, despite requests by Cleveland Clinic staff.

Patch staffers Paige Austin and Bea Karnes and The Associated Press contributed to this report.