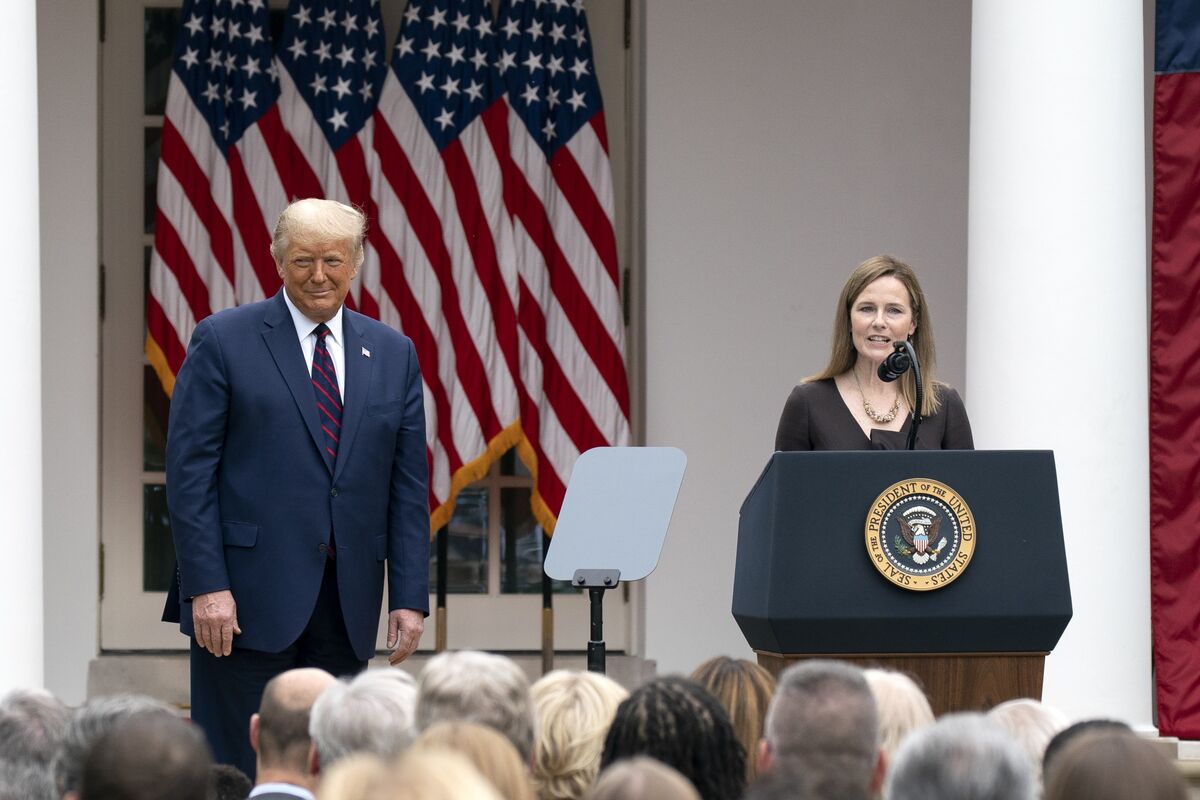 Democrats zeroed in on the risk to Americans’ health-care coverage in previewing the tactics they’ll use to oppose the confirmation of Amy Coney Barrett, President Donald Trump’s new Supreme Court pick.

Regardless, Barrett’s confirmation seems assured given the Republican majority in the Senate. She would replace the most progressive member of the Supreme Court, Justice Ruth Bader Ginsburg, who died on Sept. 18. Barrett’s a conservative favorite who, at just 48 years old, could be expected to remain on the court for decades.

Senate Republicans have signaled plans for a quick confirmation process kicking off on Oct. 12, and along with Trump are optimistic that a new justice can be seated before the Nov. 3 presidential election.

Democrats indicated a laser-like focus on the Affordable Care Act, or Obamacare, and portrayed the election as a way for their voters to help offset the court’s expected further shift to the right under Trump.

The Supreme Court will hear a case Nov. 10 that could ultimately be the means to strike down the ACA, long a Republican goal.

“It’s very clear from her writings, multiple writings, that she will be the vote that takes away health care for millions of Americans,” Democratic Senator Debbie Stabenow of Michigan said of Barrett on “Fox News Sunday.”

Later, Senate Democratic Leader Chuck Schumer joined a handful of his colleagues in declaring that he won’t meet with Barrett, saying at his New York office that the “whole process has been illegitimate.”

Barrett’s religious views, though, should play no role in the confirmation process, said Schumer. “It’s the issues.” Barrett, a mother of seven, would be the court’s sixth Roman Catholic if confirmed.

Trump’s chief of staff, Mark Meadows, said on CBS’s “Face the Nation” that the White House has already been in talks with Senate Majority Leader Mitch McConnell and Senate Judiciary Chairman Lindsey Graham to expedite the confirmation process.

The White House will begin delivering information on Barrett to Capitol Hill on Monday, he said.

Senator Dick Durbin of Illinois said Democrats are powerless to stop the juggernaut.

“We can slow it down perhaps a matter of hours, maybe days at the most, but we can’t stop the outcome,” Durbin, the second ranked Democrat in the Senate, said on ABC’s “This Week.”

Senator Mazie Hirono of Hawaii, like Schumer, said she won’t meet with Barrett before the mid-October hearings but “will take the opportunity to question her when she is under oath.”

“The issue is whether or not her closely held views on issues such as the Affordable Care Act, such as abortion rights, can be separated from her ability to be a fair and objective justice,” Hirono said on CNN’s “The Situation Room.”

During three years on the federal appeals court in Chicago, Barrett maintained a consistently conservative voting record across the range of issues that came before her, including gun rights and the government’s ability to protect workers and consumers from discrimination.

She could also create a majority on the court willing to overturn Roe v. Wade, the landmark decision legalizing abortion in the U.S. that has stood since 1973.

— With assistance by Jordan Robertson, Daniel Flatley, and Billy House

Before it’s here, it’s on the Bloomberg Terminal.