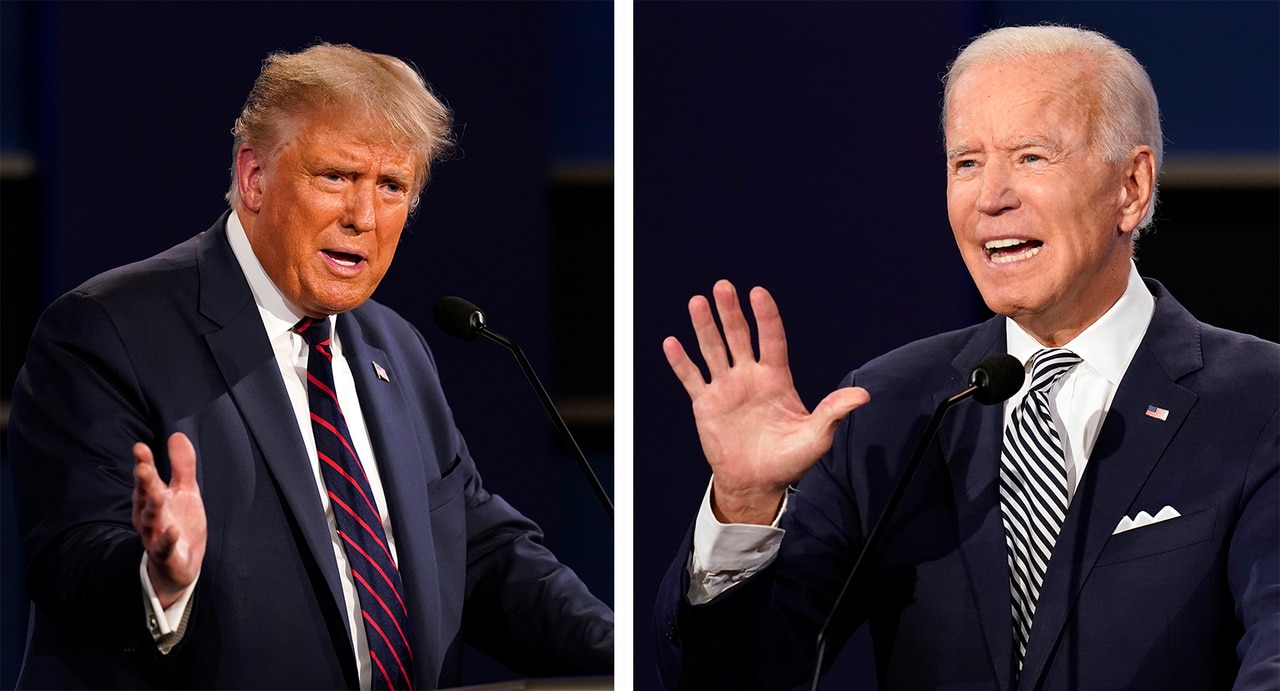 CLEVELAND, Ohio – Donald Trump and Joe Biden had their say, but not always with context or sometimes even facts to back up claims made during Tuesday’s presidential debate in Cleveland.

Trump: “Can you imagine when they say you have to have your ballot in by Nov. 10? Nov. 10? That’s seven days after the election in theory should have been announced. We have major states with that, all run by Democrats,” Trump said in discussing election “fraud.”

The facts: Under law Ohio, a state where Republicans have dominated the statewide offices for years, the ballots arriving after the election will be counted, just as it was the case in 2016 when Trump won the state, and in elections before then.

2. Trump vs. Barack Obama/Biden on the economy

Trump: “We built the greatest economy in history.”

Biden: “We handed him (Trump) a booming economy. He blew it.”

The facts: Here’s what the record says on jobs and unemployment rates, according to the U.S. Bureau of Labor Statistics: Jobs growth slowed during the first three years under Trump from what had been the case during the final three years of Barack Obama. This is before the coronavirus struck, inflicting damage to the jobs market.

As for the unemployment rate, it fell from 6.6% to 4.7% during Obama’s final three years, then dropped to 3.6% after three years under Trump, as of January of this year.

Read more about jobs and unemployment under Trump and Obama.

3. Coronavirus and how the U.S. has fared

Biden: “A lot of people have died and a lot more people are going to die unless he (Trump) gets a lot smarter.”

Trump said: “He (Biden) wants to shut down the country.” and also questioned the reporting of coronavirus death numbers from other countries.

The facts: Uniform reporting of coronavirus cases and deaths has been a problem. As far as what is known, and compiled by Johns Hopkins University, the reported deaths in the U.S. of just over 200,000 account for 1-in-5 known deaths worldwide. The rates per 100,000 people are higher than the U.S. in at least 10 countries, including Peru, Belgium, Chile and Spain; they are lower in many more countries.

Read more about coronavirus deaths in the U.S. and elsewhere.

Moderator Chris Wallace: “Will you tell us how much you paid in federal income taxes in 2016 and 2017?”

The facts: Only a holder of Trump’s tax returns knows for sure. The New York Times recently reported that Trump paid $750 in federal income taxes in 2016, the year he was elected president. And he paid $750 his first year in office. In other years, he paid nothing, the Times reported. Trump directly disputed this on Tuesday night, but he has not released his tax returns as proof, breaking from the custom of every presidential candidate in the last 40 years.

Read more about Trump’s taxes, the New York Times report and the history of presidential candidates making their returns public.

Trump: “Obamacare is no good. We made it better. We took away the individual mandate.”

Biden: Accused Trump of working to undermine Obamacare and protections for Americans in need of health care.

The facts: Attitudes toward Obamacare widely differ. One area where facts are available is the number of people insured. Census Bureau estimates say the number of uninsured Americans increased by 1 million from 2018 to 2019, increasing to 29.6 million, as the percentage of uninsured increased from 8.9% to 9.2%. The national uninsured rate was 15% in 2010 and then dipped sharply after many of the provisions of the Affordable Care Act known as Obamacare kicked in during 2013-14, the Census Bureau said. Rates have edged up in recent years, under Trump.

Read more about coverage plans under the Affordable Care Act.

Rich Exner, data analysis editor for cleveland.com, writes about numbers on a variety of topics. Follow on Twitter @RichExner. See other data-related stories at cleveland.com/datacentral.