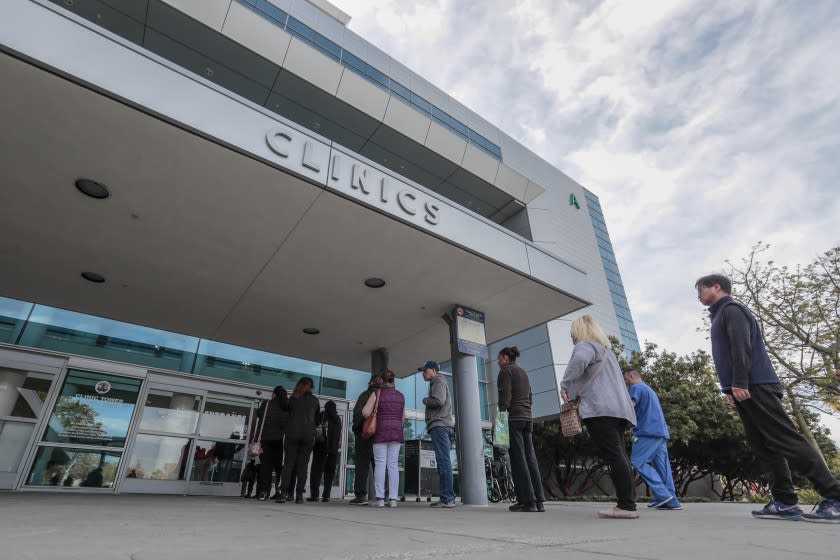 It started with a phone call in the fall of 2018 from a doctor working for the Los Angeles County Department of Health Services.

Patients by the thousands were suffering unnecessarily because of extremely long waits to see specialists, the doctor said. Some were dying before they could get an appointment.

The tip launched an investigation that spanned nearly two years and focused on the county’s sprawling safety-net healthcare system that serves more than 2 million, primarily the region’s poorest and most vulnerable residents.

We interviewed dozens of current and former county healthcare providers, patients and outside medical experts. We also analyzed L.A. County data from hundreds of thousands of specialist referrals and obtained thousands of pages of medical records.

How we verified long waits

The stories we heard were always the same: Wait times were dangerously long.

But the patients and their families were most often relying on memory. Doctors and nurses can’t talk about cases for fear of retaliation from their bosses and concerns about violating strict medical privacy laws. We needed medical records to verify the accounts.

By law, medical records are private. So requests have to be signed by patients or, if the patient has died, by the person who signed the death certificate. We spent months driving across Southern California knocking on doors and collecting signatures.

Conspicuously absent were records from eConsult, an internal email-like system that primary care doctors and nurses use to discuss cases and arrange face-to-face appointments with specialists. We helped the family members push back and demand everything they were entitled to.

It was only after county officials learned The Times was working with the families that they turned over records from the referral system — with an apology for the delay.

After asking for permission from the families, we shared the documents the county finally produced with medical experts inside and outside the county system. Long waits were obvious in every case.

Half a dozen of the patients died after waiting at least three months to see a doctor in a critical specialty — cardiology, oncology, gastroenterology and nephrology. It wasn’t always clear how much the long waits contributed to the patient’s death, but in every case, the experts said, the patient should have been treated much sooner.

Though the individual stories were heartbreaking, they were also anecdotal. We needed to find out whether they were unusual or represented a common experience for L.A. County patients.

How we calculated overall wait times

We knew that it was possible to measure wait times for routine specialist appointments provided by the Department of Health Services. In 2017, two county health services executives published a study with Harvard University researchers concluding that the department’s adoption of eConsult had reduced wait times by 17%.

We submitted a public records request for an updated version of the data used in the study, which contained no patient identifying information. The county provided more than 860,000 records of communications between primary care providers and specialists from 2016 through 2019. Slightly more than half of those resulted in specialist appointments.

We calculated wait times by starting with the date a primary care provider first reached out to a specialist on the patient’s behalf.

Our analysis found that wait times varied widely. The mean wait — what most people know as the average — was 89 days. The median — the point at which half the waits were shorter and half were longer — was 66 days.

County health officials, using a method they did not fully explain and data elements they did not provide to The Times, came up with an average of 74 days in 2018, the last full year for which data was available at the time.

All of those waits are significantly longer than the 15-business-day limit for specialty appointments set by California for HMOs.

What objections did the county raise?

County health services officials voiced several concerns about using the eConsult data. They noted that eConsult doesn’t capture specialist treatment when patients show up in the emergency room or urgent care with an immediate health crisis.

And they said eConsult is not the official repository of final appointment dates, so some dates don’t appear and others might contain errors. We asked for the official dates, but the county declined, saying they would be impossible to provide.

Officials also argued that our analysis failed to take into account thousands of cases in which specialists provided enough advice to primary care providers through eConsult to render an appointment unnecessary. But our focus was on the length of time it took for patients who actually got appointments with specialists.

More significant, the county said our analysis ignored its triage system in which a specialist recommends a particular time frame for a face-to-face appointment based on a patient’s individual health condition. Those time frames can be specific — from less than 15 days to as long as three to six months out — or they may be a recommendation that the patient simply be given the next available appointment, whenever that might be.

In December, the Department of Health Services used eConsult data to calculate the rate at which it was meeting those time frames. The department told the L.A. County Board of Supervisors that it met the “optimal” time frame 73% of the time during the third quarter of 2019.

But that figure obscures how long patients had to wait.

Analyzing the same data, we found that a huge proportion of those patients — nearly 40% — had been given no time frame and were instead scheduled for the next available appointment. We found that those patients waited an average of 112 days.

Using the county’s own method of calculating wait times, we found that when specialists recommended patients be seen within a specific time limit — two weeks, a month, six months — they met the mark only 57% of the time.