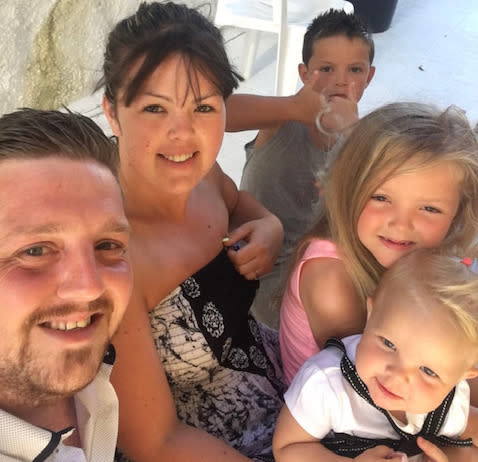 A father-of-four has hit out at the government for “pushing aside” cancer patients after his wife’s brain cancer spread when her chemotherapy was stopped during the coronavirus lockdown.

Andy Jenkinson said having life-saving treatment stopped for several months had handed a “death sentence” to some patients.

The 33-year-old, from Bury, Greater Manchester, spoke out after his wife Emma, 31, was told that her brain cancer had spread after her chemotherapy was stopped during lockdown.

He is now working to raise awareness of the issue and says he has been contacted by hundreds of people in similar situations.

Earlier this year, research suggested that almost 18,000 more people would die from cancer over the following 12 months in England because of the impact of COVID-19.

Pitty you didn’t have the same determination for cancer patients, my wife’s grade 4 brain cancer grew because she was took off chemo for 2 months through this Virus. She’s only 31 and we have 4 young kids at home. Bad enough being isolated since March, but this topped it 😡😡 https://t.co/nFWUJFKk9Q

“They have definitely pushed people aside,” Andy told Yahoo News UK. “I can understand why they are focusing more on COVID-19 but that doesn’t give them the right to push people away and basically give them a death sentence.

“What’s the point of telling people to shield and say we’re saving you from the virus but at the same time telling people ‘we’re taking away your treatment’.

“It’s pointless. These people might as well not have shielded. They might as well have gone out, lived their lives and still had treatment.”

He said Emma, who had previously battled cancer once, was diagnosed in 2018 with a type of brain cancer called glioblastoma multiforme.

“She had been on chemo since then. We actually found out at the start of the year that the chemo was actually working and it was stopping the cancer growing and the cancer had even shrunk a bit. We were feeling quite positive.”

Shortly before the coronavirus lockdown, Emma’s chemotherapy session was delayed because one of the couple’s four children had a cough, he said.

Initially the delay was for seven days, but as rules on self-isolation changed Andy said they were told that given the progress Emma had been making, her chemotherapy would be put on hold for a few months while they shielded.

“We were worried but we just got on with it. There was nothing we could do,” he said.

“At the beginning of May Emma started feeling really unwell. She started losing her balance, falling over. At its worst she was falling 15-20 times a day. She actually fell over in the garden quite heavily and banged her head on a concrete post so I had to rush her to A&E.”

At that point Christie Hospital in Manchester, where Emma had been receiving treatment, was informed and she was taken in for a scan, which showed her cancer had spread.

“She got told last week that surgery isn’t going to happen,” said Andy, who is his wife’s full-time carer. “The cancer has gone further into the brain and if they do the operation it will cause a lot of damage and she won’t have any quality of life.

“The chemo she is on now has knocked her, and it won’t get rid of the cancer. They said if this chemotherapy doesn’t work then it’s going to be a very complicated 12 months.”

This for me just proves my argument, many people are dying from other diseases and many of them have had treatments stopped at some point during all of this. I’m not saying there isn’t a virus but it’s not the only thing that’s killing people, yet it’s ignored #cancer #COVID19 pic.twitter.com/vR9D7OMLgU

Andy, who has paid tribute to the NHS for the “fantastic” treatment his wife has received, said he had contacted his local MP to ask why Emma’s chemotherapy had been stopped but had been greeted with silence.

He took the decision to speak out in an effort to raise awareness of the situation.

“I couldn’t sit still. I was angry, I was frustrated and I didn’t realise how many people this had affected. I have had hundreds of messages from people saying they are in similar positions.

“It’s awful knowing there are so many people out there suffering, not just from cancer but from other illnesses like heart disease.

He also said government claims that four out of five cancer patients had continued receiving treatment was “disheartening”, because it meant one in five hadn’t.

Click here to sign up to the latest news, advice and information with our daily Catch-up newsletter