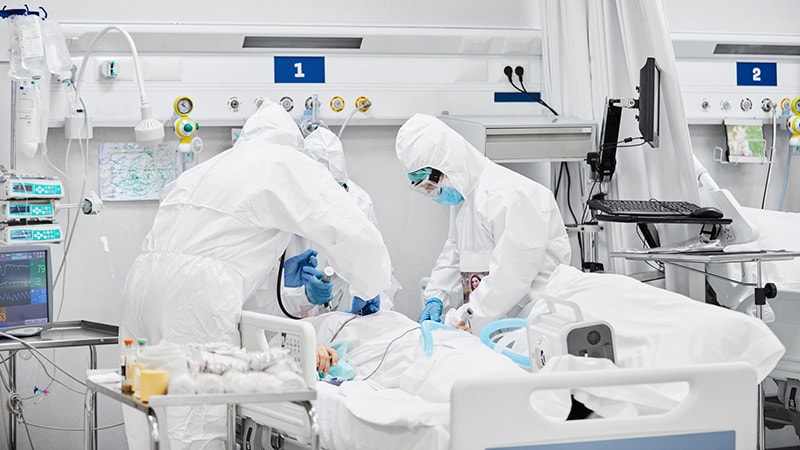 Tracheal intubation and extubation may not produce enough aerosols to warrant being designated as procedures associated with high risk for transmission of SARS-CoV-2, researchers say.

The researchers’ sampling of particle sizes in operating rooms calls into question the extreme infection protocols that have been mandated in many hospitals since the outbreak of COVID-19.

“Our findings are quite striking in that we don’t see aerosol generated to a significant level,” said Tony Pickering, MBChB, PhD, a professor of neuroscience and anestheisa at the University of Bristol in the United Kingdom.

The study was published in Anaesthesia.

Experts, however, are split on whether the data are sufficient to change safety protocols.

Droplets greater than 20 µm in diameter appear to be the primary route by which SARS-CoV-2 is transmitted, but there is some evidence that smaller particles may also play a role. Aerosolized particles, which these authors say are “typically considered to be <20 µm in diameter and particularly those of < 5 µm,” might travel long distances, linger in the air, and potentially transit the length of the respiratory tract.

Many jurisdictions around the world, including in the United Kingdom and the United States, have designated tracheal intubation and extubation as aerosol-generating procedures.

Earlier retrospective and cohort studies of SARS-CoV-1 suggested that healthcare workers who perform intubation had an increased risk for infection from that virus. However, these data fall short of closing the case, Pickering and colleagues argue.

To investigate aerosolized particle generation during these procedures, the researchers used an optical particle sizer (TSI Inc) that could detect particles from 300 nm to 10 μm in diameter by laser optical scattering.

They sampled the air in an operating room with ultraclean, laminar flow ventilation, high-efficiency particular air filtration, and an air supply rate of 1200 m3/sec.

The researchers then connected a sampling funnel through a tube to the optical particle sizer and positioned the funnel half a meter from the patients’ heads. They then carried out 19 intubations and 14 extubations. They found that a volitional cough in this setting sprayed an average of 732 (SD, 418) particles per liter of air.

Tracheal intubation, including face‐mask ventilation, produced almost no aerosolized particles (an average concentration of 1.4; SD, 1.4) per liter. The difference in concentration compared to a cough was highly significant (P < .0001).

Tracheal extubation produced an average detectable aerosol concentration of 21 particles per liter (SD, 18), but this was still 35‐fold less than a volitional cough (P < .0001).

During 4 of 10 extubations, the patient coughed at least once, typically after tube removal. These coughs produced particles of a similar size distribution to that of the reference coughs but were always smaller in magnitude than the average volitional cough.

“We have been managing patients as if they are presumed to have COVID,” Pickering told Medscape Medical News. “There are delays in processes, costs, and challenges as practitioners, and I think that needs to be reappraised in the light of the evidence we have started to produce.”

He estimated that donning and doffing PPE add 10 minutes to each procedure, and waiting 10 minutes for the air to clear after each intubation and extubation adds another 20 minutes, for a total of about a half hour.

These delays have contributed to about a 50% drop in the number of procedures being performed with general anesthesia in the United Kingdom since the pandemic began and are forcing delays in needed surgeries, he said. In addition, the approach is straining the supply of PPE.

In a press release, William Harrop-Griffiths, MA, MBBS, vice president of the Royal College of Anaesthetists, called for changes in safety protocols on the basis of the finding.

“If Public Health England and its devolved equivalents accept this evidence, many more patients can undergo the surgery they need, and the NHS [National Health Service] can keep planned surgery going during the second surge of COVID-19 — and may even be able to start to reduce the waiting lists for surgery,” he said.

Richard Beers, MD, chair of the American Society of Anesthesiologists’ Committee on Occupational Health, took a more cautious position. “The bottom line is that I think the PPE recommendations should stay in place,” he told Medscape Medical News.

Although muscle relaxants prevent coughing in most circumstances, they can’t always be used, and patients sometimes cough much more than expected.

In the United States, delays to allow the air to be refreshed in operating rooms are at the discretion of individual facilities, and neither this requirement nor donning and doffing PPEs appear to be resulting in significant delays, Beers said.

“I commend the authors,” he said. “I think they have done a great service. I just don’t think we have gotten to the point where we can relax our defences.”

The authors and interviewees have disclosed no relevant financial interests.

Laird Harrison writes about science, health and culture. His work has appeared in magazines, newspapers , and online publications. He is at work on a novel about alternate realities in physics. Harrison has taught writing at San Francisco State University, UC Berkeley Extension and the Writers Grotto. Visit him at lairdharrison.com or follow him on Twitter: @LairdH .