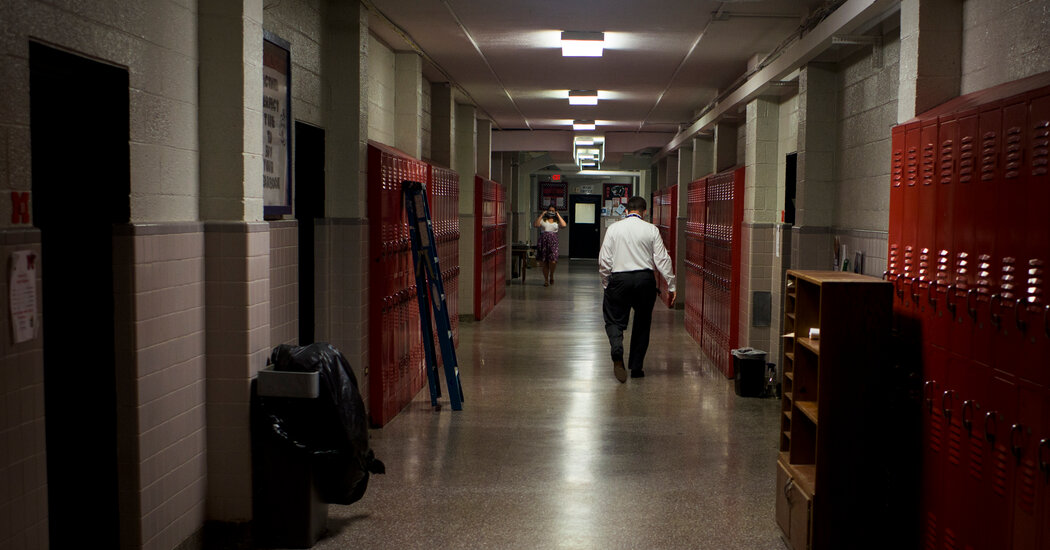 While families across the United States this summer were on edge about the coming school year, top White House officials were pressuring the Centers for Disease Control and Prevention to play down the risk of sending children back to school, according to documents and interviews with current and former government officials.

The effort included an attempt to find alternate data showing that the coronavirus pandemic was weakening and posed little danger to children — a strikingly political intervention in one of the most sensitive public health debates of the pandemic.

A member of Vice President Mike Pence’s staff said she was repeatedly asked by Marc Short, the vice president’s chief of staff, to get the C.D.C. to produce more reports and charts showing a decline in coronavirus cases among young people.

Mr. Short dispatched junior members of the vice president’s staff to circumvent the C.D.C. in search of data he thought may better support the White House’s position, said Olivia Troye, the aide, who has since resigned.

In another instance, Dr. Deborah L. Birx, the White House’s coronavirus response coordinator, pushed the C.D.C. to incorporate a document from a mental health agency inside the Department of Health and Human Services that warned school closures would have a long-term effect on the mental health of children and that asymptomatic children were unlikely to spread the virus.

Scientists at the C.D.C. pointed out numerous errors in the document and raised concerns that it appeared to minimize the risk of the coronavirus to school-age children, according to an edited version of the document obtained by The New York Times.

The gist of the mental health agency’s position — stressing the potential risks of children not attending school — became the introductory text of the final C.D.C. policy, leaving some officials there dismayed.

In the 10 months since a mysterious pneumonia began striking residents of Wuhan, China, Covid-19 has killed more than one million people worldwide as of Monday — an agonizing toll compiled from official counts, yet one that far understates how many have really died.

The coronavirus may already have overtaken tuberculosis and hepatitis as the world’s deadliest infectious disease. And unlike all the other contenders, it is still growing fast.

Like nothing seen in more than a century, the virus has infiltrated every populated patch of the globe, sowing terror and poverty, infecting millions of people in some nations and paralyzing entire economies.

But as attention focuses on the devastation caused by halting a large part of the world’s commercial, educational and social life, it is all too easy to lose sight of the most direct human cost.

More than a million people — parents, children, siblings, friends, neighbors, colleagues, teachers, classmates — all gone, suddenly, prematurely. More than 200,000 in the United States, which has the largest total number of coronavirus deaths in the world, followed by Brazil, with over 140,000.

Dr. Michael Ryan, the head of the World Health Organization’s emergencies program, said on Monday that the actual numbers were probably higher.

“When you count anything, you never count it perfectly,” he said at a news conference in Geneva. “But I can assure you that the current numbers are likely an underestimate of the true toll of Covid.”

Those who survive Covid-19, the disease caused by the virus, are laid low for weeks or even months before recovering, and many have lingering ill effects of varying severity and duration.

Yet much of the suffering could have been avoided.

“This is a very serious global event, and a lot of people were going to get sick and many of them were going to die, but it did not need to be nearly this bad,” said Tom Inglesby, the director of the Johns Hopkins Center for Health Security.

At the height of the first wave, places like China, Germany, South Korea and New Zealand showed that it was possible to slow the pandemic enough to limit infections and deaths while still reopening businesses and schools.

But that requires a combination of elements that may be beyond the reach of poorer countries — and that even ones like the United States have not been able to muster: wide-scale testing, contact tracing, quarantining, social distancing, mask wearing, providing protective gear, developing a clear and consistent strategy, and being willing to shut things down in a hurry when trouble arises.

Time and again, experts say, governments reacted too slowly, waiting until their own countries or regions were under siege, either dismissing the threat or seeing it as China’s problem, or Italy’s, or New York’s.

Thomas R. Frieden, a former head of the U.S. Centers for Disease Control and Prevention, said that a major failing had been in governments’ communication with the public, nowhere more so than in the United States.

“You have standard principles of risk communication: Be first, be right, be credible, be empathetic,” he said. “If you tried to violate those principles more than the Trump administration has, I don’t think you could.”

The world now knows how to bend the curve of the pandemic — not to eliminate risk, but to keep it to a manageable level — and there have been surprises along the way.

Masks turned out to be more helpful than Western experts initially predicted. Social distancing on an unheard-of scale has been more feasible and effective than anticipated. The difference in danger between an outdoor gathering and an indoor one is greater than expected.

And, crucially, people are most contagious when they first show symptoms or even earlier, not days or weeks later, when they are sickest — a reversal of the usual pattern with infectious diseases. That makes preventive measures like wearing masks and swift responses like isolating and testing people for possible exposure much more important. If you wait until the problem is evident, you’ve waited too long.

Negotiators resumed talks on Monday over a coronavirus relief package in a final bid to revive stalled negotiations as House Democrats unveiled a $2.2 trillion coronavirus relief bill that would provide aid to American families, businesses, schools, restaurants and airline workers.

The release of the legislation came minutes before Speaker Nancy Pelosi of California and Steven Mnuchin, the Treasury secretary, spoke on the phone Monday evening, as the pair seeks to end the impasse over another round of aid. The two agreed to speak again Tuesday morning, said Drew Hammill, a spokesman for Ms. Pelosi.

The moves appeared to be the most concrete action toward another stimulus bill since negotiations stalled nearly two months ago. But the sides remain far apart on an overall price tag, and with just over a month before Election Day, lawmakers and aides in both chambers warned that the time frame for striking a deal was slim.

Absent an agreement with the administration, the House could vote as early as this week to approve the legislation, responding to growing pressure for Congress to provide additional relief and quelling the concerns of moderate lawmakers unwilling to leave Washington for a final stretch of campaigning without voting on another round of aid. But at roughly $1 trillion more than what Mr. Mnuchin has signaled the White House is willing to consider, the package is likely just a starting point, all but guaranteed to be rejected by the Republican majority in the Senate should the House pass it in its current form.

Democrats maintained a provision that would revive a lapsed $600 enhanced federal unemployment benefit and another one that would send a second round of $1,200 stimulus checks to Americans. And some measures were either added or expanded: $225 billion for schools and $57 billion for child care, an extension of an expiring program intended to prevent the layoffs of airline workers through March 31 and the creation of a $120 billion program to bolster ailing restaurants.

After months of promising signs in its fight against the coronavirus, New York State on Monday reported a spike in its rate of new cases, including a rise in New York City and in its northern suburbs.

The rate of positive test results in the city reached 1.93 percent, Mayor Bill de Blasio said on Monday, an increase from the 1.5 percent rate reported by the city a week before, as officials continued to warn about dangerous behavior in several communities.

The increase in the city, the onetime center of the pandemic, and some suburbs contributed to the statewide rate of approximately 1.58 percent — a jump from results reported on Sunday and in prior weeks.

Gov. Andrew M. Cuomo, a third-term Democrat, said on Monday that the increase was primarily because of clusters in Brooklyn, as well as in Rockland and Orange Counties, in the Hudson Valley, saying there was “significant action” in those areas.

Officials are particularly concerned about eight neighborhoods in Brooklyn and Queens, some with large Orthodox Jewish communities, that have accounted for about one-fourth of New York City’s new cases in the past two weeks, despite representing about 7 percent of the city’s population.

On Monday, Mr. Cuomo said that he would make 200 rapid testing machines available to schools and local governments in areas where rates were rising, saying “the key with these clusters is to jump on them quickly.”

All told, the state on Monday reported 834 new cases, out of nearly 53,000 tests, the governor said, adding the spike in the positivity rate was largely confined to 20 ZIP codes, where the rate went as high as 30 percent, in contrast with the rest of the state, where the rate remained around 1 percent.