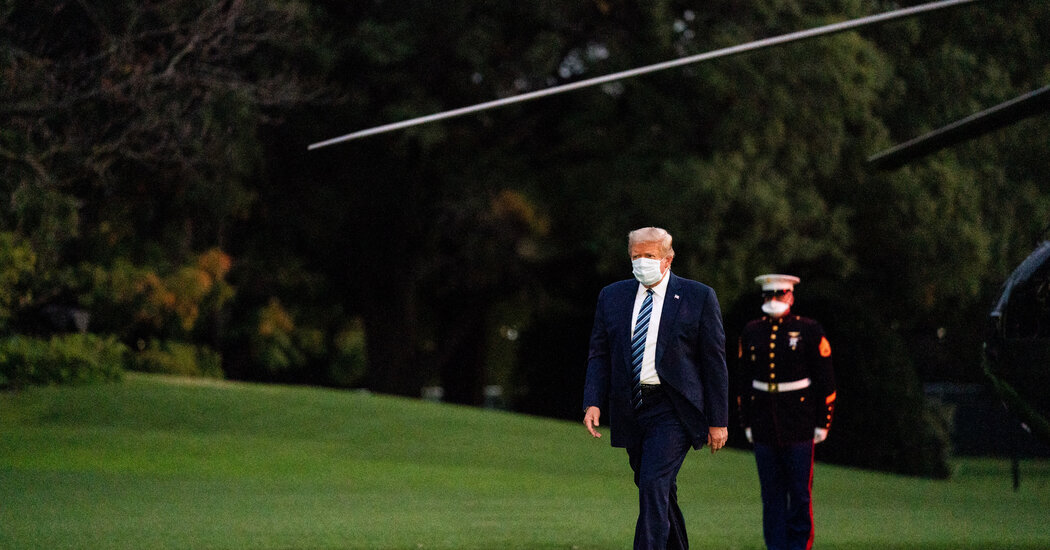 President Trump, whose progress recovering from Covid-19 remains unclear, planned to host hundreds of people on the South Lawn of the White House on Saturday for his first in-person event since announcing that he had tested positive for the coronavirus, three people familiar with the plans said.

The president is expected to address the crowd from a White House balcony, one of the people familiar with the plans said. His campaign also said that he would hold a rally in Florida on Monday.

Outside medical experts cautioned that an inappropriately expedited return to the public for Mr. Trump could risk infecting others and that resuming public duties might worsen his condition. Covid-19 patients can take turns for the worse during the second week of illness, and the president’s positive test came on Oct. 1, putting him within that window.

One person familiar with the planning for the White House event said that all attendees were required to wear masks on the complex and would have to submit to temperature checks and a questionnaire in the morning.

It remains unclear how serious Mr. Trump’s illness is, though he has said repeatedly that he feels “great.” Shortly after his diagnosis, Mr. Trump received supplemental oxygen, as well as some treatments — including the antiviral remdesivir and the steroid dexamethasone — that are usually reserved for patients with severe cases. The Centers for Disease Control and Prevention say that people with severe disease may need to double their isolation period from 10 days to 20 days.

“Based on what we know, he likely had severe Covid,” said Dr. Maricar Malinis, an infectious disease physician at Yale University.

Dr. Malinis also said there was some evidence suggesting that steroids like dexamethasone, which suppress the immune system, could prolong the period in which people shed the virus. That could further muddy the timeline for when the president should end his isolation.

Some in the White House and on the Trump campaign expressed concern about what the president might say at the event, and feared the gathering would serve to underscore criticism that Mr. Trump has been cavalier about a virus that has killed over 210,000 Americans.

Mr. Trump, in his first televised interview since announcing the positive test result, said Friday night on “Tucker Carlson Tonight” that he was off his medications. The president also said he had been retested for the coronavirus on Friday, and told the Fox News contributor Dr. Marc Siegel that “I’m either at the bottom of the scale or free,” a likely reference to the levels of virus in his body. He said he would probably be tested again on Saturday.

What faint hopes remained that Europe was recovering from the economic catastrophe delivered by the pandemic have faded as the virus has resumed spreading rapidly across much of the continent.

After sharply expanding in the early part of the summer, Britain’s economy grew far less than anticipated in August — 2.1 percent compared with July, the government reported on Friday, adding to worries that further weakness lies ahead.

Earlier in the week, France, Europe’s second-largest economy, downgraded its forecast for the pace of expansion for the last three months of the year from an already minimal 1 percent to zero. The national statistics agency predicted that the economy would contract 9 percent this year.

The diminished expectations are an outgrowth of alarm over the revival of the virus, which has prompted President Emmanuel Macron to announce new restrictions, including a two-month shutdown of cafes and bars in Paris and surrounding areas.

In July, with infection rates down and lockdowns lifted, many European economies expanded strongly as people returned to shops, restaurants and vacation destinations. The most optimistic economists began celebrating a so-called V-shaped recovery, featuring a bounce-back just as steep as the plunge that preceded it.

But Spain’s central bank governor said this week that new restrictions to slow the virus’s accelerating spread could produce an economic contraction of as much as 12.6 percent this year.

And the European Central Bank’s chief economist said on Tuesday that the 19 countries that share the euro currency might not recover from the disaster until 2022, with those that are dependent on tourism especially vulnerable.

In a five-minute video posted to his Twitter account on Wednesday, President Trump stood in front of the White House and offered a lavish endorsement for a treatment he had received while hospitalized at Walter Reed National Military Medical Center.

“They gave me Regeneron, and it was like, unbelievable — I felt good immediately,” he said, referring to an experimental cocktail of monoclonal antibodies produced by the pharmaceutical company Regeneron. “I want everybody to be given the same treatment as your president.”

The president’s video raised many questions, including whether the antibody cocktail could have such a significant effect in such a short time. (Some physicians were skeptical.)

But for the question of how he planned to ensure that a therapy not yet approved by the Food and Drug Administration would soon be available, he had an answer: “I have emergency-use authorization all set,” he said in the video. “And we’ve got to get it signed now.”

Vaccines, drugs and medical devices sold in the United States generally require F.D.A. approval. But for more than 15 years, the agency has had the authority, when certain conditions are met, to grant emergency-use authorizations, which allow the sale of unapproved medical products.

It has used such authorizations during several disease outbreaks, including H1N1 flu in 2009 and Zika in 2016, but the coronavirus has brought their deployment on a new scale.

Since February, the agency has granted more than 300 Covid-related emergency-use authorizations, and many observers expect that Covid vaccines will first be made available in the United States under a such a procedure.

A federal judge on Friday allowed Gov. Andrew M. Cuomo to move forward with new restrictions on gatherings at synagogues and other houses of worships, finding that the rules did not violate the free exercise of religion for Orthodox Jews.

The ruling in federal court in Brooklyn came after Agudath Israel of America, a national Orthodox Jewish organization, sued Mr. Cuomo this week over an executive order detailing restrictions to address rising coronavirus cases in neighborhoods with large populations of Orthodox Jews.

After an emergency hearing on Friday, the judge declined to temporarily block the executive order ahead of three Jewish holidays over the weekend. She said she sympathized with the order’s impact on the Orthodox Jewish community, but rejected the argument that Mr. Cuomo had unconstitutionally targeted a religious minority.

“How can we ignore the compelling state interest in protecting the health and life of all New Yorkers?” said Judge Kiyo A. Matsumoto of Federal District Court in Brooklyn.

Lawyers for Agudath Israel, an umbrella group with affiliated synagogues around the country, argued that the new rules were unconstitutional because they prevented Orthodox Jews from exercising their religion. The Roman Catholic Diocese of Brooklyn also filed a similar lawsuit against Mr. Cuomo on Thursday.

The judge’s decision means that Mr. Cuomo can impose the new restrictions as the lawsuit progresses.

President Trump got a well-wishing phone call this past week from one of the few foreign leaders who knows what he’s been going through: Prime Minister Boris Johnson of Britain, the survivor of a serious brush with the coronavirus this spring.

Mr. Trump seized on the call as another opportunity to boast of a swift recovery from Covid-19. But he should take little comfort from Mr. Johnson’s experience — and not just because the prime minister ended up in an intensive-care unit.

Six months after being released from the hospital, Mr. Johnson has yet to shake off questions about the effects of the disease on his energy, focus and spirit, and the idea that his illness has become a symptom of his broader political decline.

“It’s a metaphor for his government, and that’s affecting him personally,” said Jonathan Powell, who was chief of staff to Tony Blair when he was prime minister. “He looks like the wrong man for the job at this time.”

Despite his efforts, Mr. Johnson has not been able to recapture the public buoyancy that propelled him to a landslide election victory last December.

A speech he gave to his Conservative Party’s annual conference on Tuesday “was palpably a chance to shake off the sense that he’s half the man he used to be, that he’s lost his élan and brio,” said Andrew Gimson, one of Mr. Johnson’s biographers.

“But he hasn’t been able to shake it off,” Mr. Gimson said.

The Centers for Disease Control and Prevention drafted a sweeping order last month requiring all passengers and employees to wear masks on all forms of public and commercial transit in the United States, but it was blocked by the White House, according to two federal health officials.

The order would have been the toughest federal mandate to date aimed at curbing the spread of the coronavirus, which continues to infect more than 40,000 people in America each day. The officials said that it had been drafted under the agency’s “quarantine powers” and that it had the support of the secretary of health and human services, Alex M. Azar II, but the White House Coronavirus Task Force, led by Vice President Mike Pence, declined to even discuss it.

The two officials said the order would have required face coverings on airplanes, trains, buses and subways, and in transit hubs such as airports, train stations and bus depots.

A task force official said the decision to require masks should be left up to states and localities.

The thwarting of the mask rule is the latest C.D.C. action to be stalled or changed by the White House. Late last month, the coronavirus task force overruled an order by the agency’s director to keep cruise ships docked until mid-February. That plan was opposed by the tourism industry in Florida, an important swing state in the presidential election.

Political appointees at the White House and the Department of Health and Human Services have also been involved in rewriting the agency’s guidelines on reopening schools and testing for the virus, bypassing the agency’s scientists.