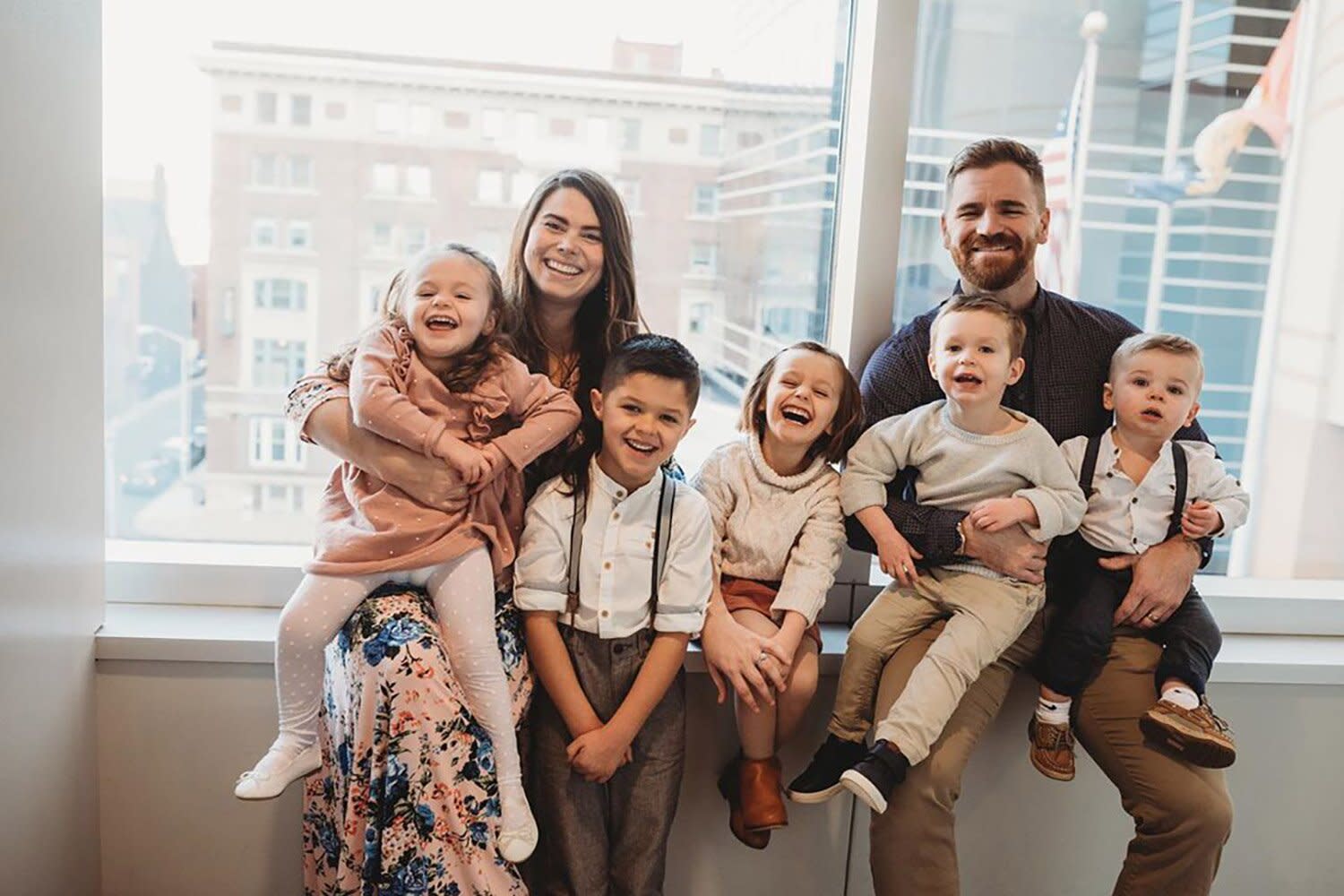 A Pennsylvania couple who has always wanted children got their wish — not once, but nine times over — when they adopted four children and welcomed one of their own, before having a set of quadruplets.

Maxine Young tells PEOPLE (the TV Show!) that while she and her husband Jake, 32, have always wanted a big family, they never expected to have nine kids, especially within a three-year period.

But that’s exactly what happened to the Youngs, who now share an adopted set of four siblings — Aiden, 8; Parker, 5; Connor, 4; and Elliott, 3 — a 23-month-old biological son, Henry, and 8-week-old biological quadruplets, Theo, Silas, Beck and Cecilia.

“This wasn’t like what we intended. We didn’t plan to have this large of a family,” Maxine, 30, says. “But it just seems like these babies are meant to be. I can’t imagine not having all four of them now at this point.”

Maxine and Jake’s journey to parenthood began in July 2017, about a year after the couple tied the knot. At the time, the Youngs knew they wanted children and were both open to the idea of adoption.

“When I was little, I always wanted to foster and adopt,” Maxine explains. “As I got older, I learned about foster care and the fact that so many kids need homes. When I met Jake, we discussed it and after we got married, that’s when we talked about it [seriously].”

With Maxine and Jake on the same page, the pair began taking classes about the foster care process. Before they knew it, they had been approved, and close to a month later on July 28, 2017, they received a call about fostering three kids.

“We had originally said that we would take up to two children, and they called us with a 4-year-old, a 2-year-old and an 11-month-old,” recalls Maxine. “I was like, ‘I think we should do it! I think we should take them on as a placement.’ And so we did.”

“We went from just me and Jake to parents of three overnight,” she continues. “And then not even a month later, we got a call for their baby sister. She was in the NICU. So we picked her up … and went from zero to four in less than a month. It was great [and] definitely chaotic.”

Six months into fostering the kids, Maxine learned she was pregnant with her and Jake’s first biological child.

The news was incredibly exciting for the couple, as they had been trying for a baby through IVF and suffered two miscarriages before conceiving Henry through IUI.

“I was really skeptical and almost didn’t think that it would actually work out,” admits Maxine. “But then as it went on, and once we got to 12 weeks and 14 weeks, that’s when we got really excited and really happy that our family was growing.”

But little did they know, that was only the beginning of their expanding family.

Just a few months before Maxine and Jake welcomed their son Henry in October, the couple learned that the rights of the four children’s biological parents had been terminated after failing to show up for scheduled visits.

“Obviously, the goal of foster care is reunification, so you always try to support that — and we did — but it’s so hard because you fall in love with the kids,” Maxine says. “When all the visits stopped, it was basically like we were already a family, so we knew it was going to go to adoption.”

On Dec. 20 — with the children’s biological grandparents in attendance — Jake and Maxine officially became the parents of Aiden, Parker, Connor and Elliott.

RELATED: Mom Learns Her 2 Adopted Kids Are Biological Siblings: ‘They Were Meant to Find Each Other’

The happy moment was documented on Maxine’s Instagram, where she said becoming their mother was the “most meaningful and fulfilling role of my lifetime.”

Just when things couldn’t seem to get any more chaotic, Maxine says she got the surprise of a lifetime: she was pregnant with triplets. A few weeks and several ultrasounds later, doctors confirmed she was actually carrying four babies, not three.

“I remember this so vividly because I remember saying, ‘Oh my gosh, what if there was another baby? Like hahaha, totally just joking,’ ” Maxine says. “And she looked at me and she said, ‘Maxine, there is. There is another baby in there.’ “

“I was excited, but also really, really nervous because it is definitely a high-risk pregnancy,” notes Maxine, who did not plan for this pregnancy and did not think she could conceive naturally, in part due to her polycystic ovary syndrome (PCOS).

Despite doctors advising the Youngs to “reduce [the babies] to two” in order to give them a better chance at survival, the couple refused to do so and continued along with the pregnancy, while receiving financial support through a GoFundMe page set up by Jake’s mom.

Then, at 21 weeks along, Maxine’s cervix starting shortening so she and Jake traveled to Phoenix to see an experienced specialist.

It was there that she underwent a cerclage and safely delivered Theo, Silas, Beck and Cecilia via C-Section on July 31 — a moment that was documented on the couple’s YouTube channel, The Family Young VLogs.

Because they arrived early, all four babies spent time in the NICU — at both the Phoenix hospital and a local one in Pennsylvania — before they were discharged one-by-one, beginning with Cecilia and ending with Beck.

“Throughout this whole process, we’ve been trying to look at things as a blessing in disguise, even though there are certain things that are hard,” Maxine explains. “Having a baby in the NICU is really hard … but we try to look at it as a blessing that I was able to recover, that we could come home and adjust and bond with our other kids again, before bringing all the babies home.”

Now, at home with their nine children amid a global pandemic, Maxine and Jake say they can’t imagine life any other way — even if things are currently very challenging.

Adds Jake: “I’m one of two, and Maxine is one of three. So it’s not like we have this experience of having a large family and know what that’s like. But here we are!”