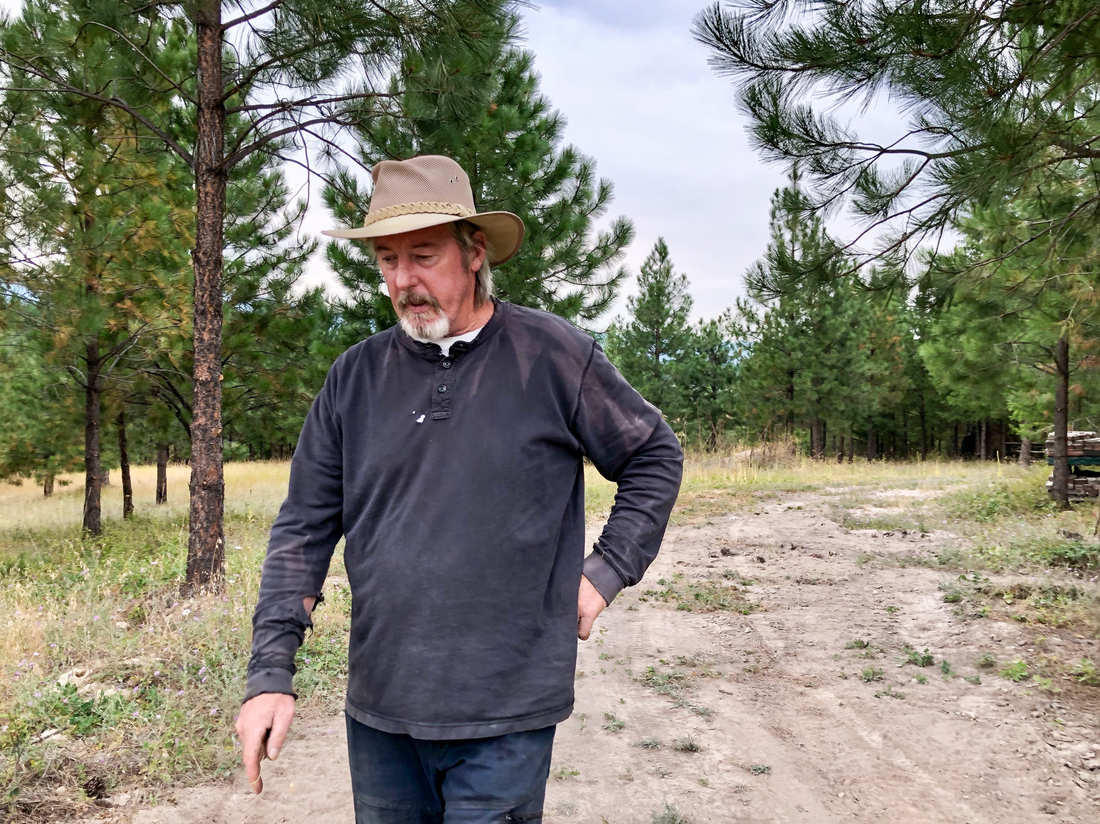 Frank Fahland, 61, is one of hundreds of Libby, Mont., residents who has an asbestos-related disease. That makes them potentially more vulnerable to complications from COVID-19. 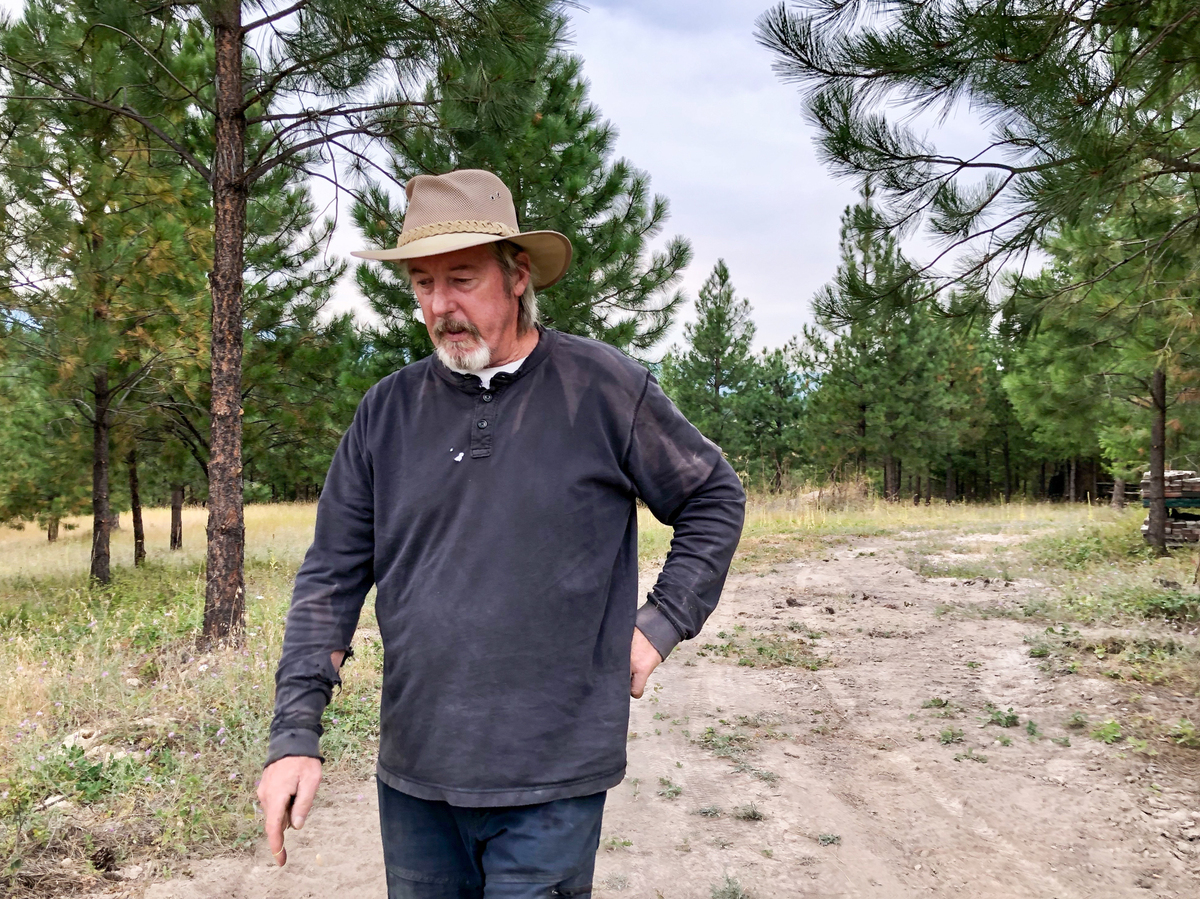 Frank Fahland, 61, is one of hundreds of Libby, Mont., residents who has an asbestos-related disease. That makes them potentially more vulnerable to complications from COVID-19.

LIBBY, Mont. — Frank Fahland has spent most days since the pandemic began at the site of his dream house, working to finish a 15-year labor of love while keeping away from town and the people closest to him.

Like thousands of people from Libby and Lincoln County, in the far northwestern corner of Montana, the 61-year-old Fahland has lungs already scarred by years of breathing in the asbestos fibers that have contaminated the area’s dust and soil. The asbestos is a legacy of a now-defunct plant in the area that made vermiculite, a mineral used in insulation and gardening.

Fahland recently gave a visitor a tour of his partially finished log home, overlooking a meadow that stretches to the foothills of the Cabinet Mountains. He struggled to climb a small hill and stopped to reach for his inhaler.

“It feels like someone is standing on your chest,” he explains, “or almost like someone stuffed a pillow down there in your lung.”

Fahland’s condition makes him more vulnerable to complications from COVID-19, so he’s keeping his distance from people, in hopes of avoiding infection. He has kept his distance from his son and granddaughter for months and he recently wrote his will.

“If it hadn’t been for COVID my will would not be written. But it is now,” Fahland says. “It’s filed in the courthouse and the whole goddamn thing is done. That gives you some idea of how seriously I take this.”

He’s not alone in taking such precautions against the virus. Lincoln County has one of the nation’s highest asbestos mortality rates. At least 400 people have died from asbestos-related diseases, which can include asbestosis, mesothelioma and lung cancer. At least 1 in 10 people in Libby have an asbestos-related illness, according to Miles Miller, a physician assistant at the Center for Asbestos Related Disease.

“Our patients having an underlying lung disease would make recovery from COVID-19 more difficult,” Miller says.

Lincoln County, population 20,000, largely was spared from outbreaks of the novel coronavirus at the beginning, which Miller chalked up to the community’s vigilance in testing, tracking and prevention efforts.

But by the fall, cases began to climb in the county along with the rest of Montana. By early October, the number of confirmed cases in Lincoln County was 170, nearly double the count at the end of August. County health officials said in a Facebook post that cases were all over the county and “it would be irresponsible to classify any towns as safe.” 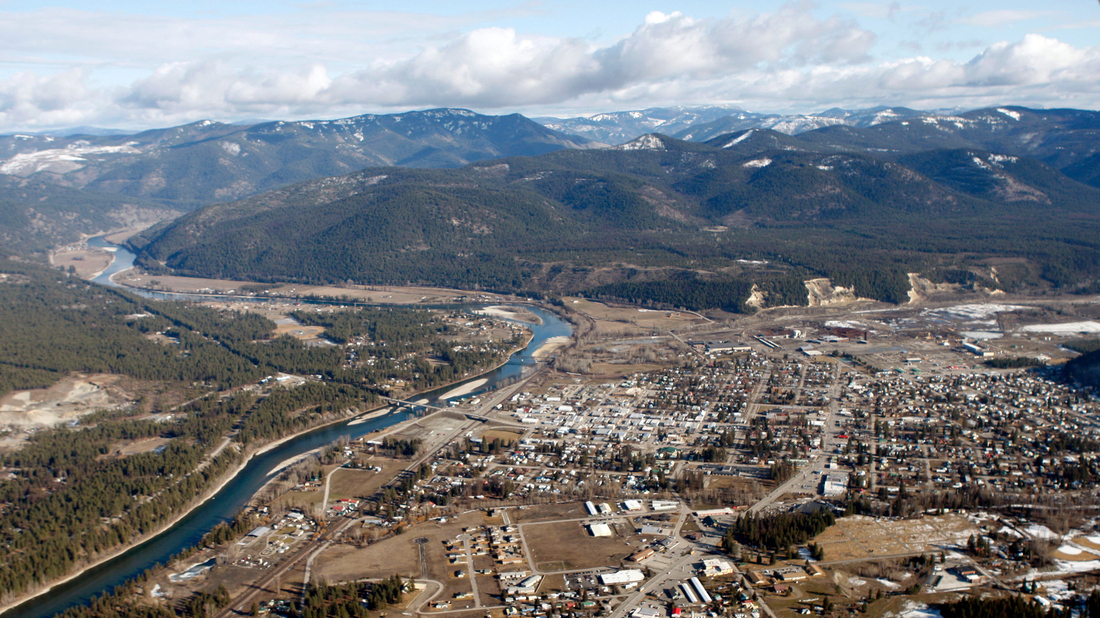 The town of Libby along the Kootenai River in Montana in winter 2010. Libby has emerged as the deadliest Superfund site in the nation’s history: at least 400 people have died from asbestos-related diseases after breathing in asbestos-contaminated dust from a nearby vermiculite mine. 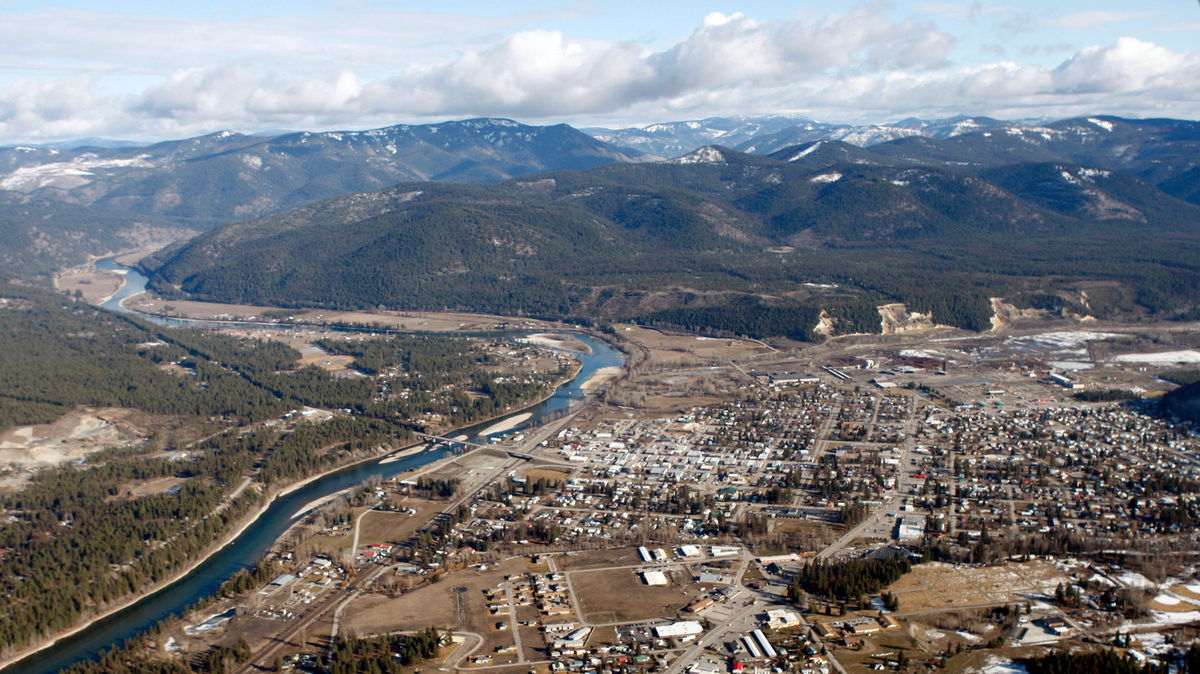 The town of Libby along the Kootenai River in Montana in winter 2010. Libby has emerged as the deadliest Superfund site in the nation’s history: at least 400 people have died from asbestos-related diseases after breathing in asbestos-contaminated dust from a nearby vermiculite mine.

The vermiculite mine closed in 1990. For decades before that, Miller says, the mine constantly spewed asbestos-laden dust throughout the town.

“During the heyday, I don’t think you could shop for groceries in this town without breathing some of the dust,” Miller says.

The extent of the public health disaster in Libby became known only after the Seattle Post-Intelligencer published a series of stories by journalist Andrew Schneider in 1999. Lawsuits began pouring in from across the nation, and W.R. Grace filed for bankruptcy protection in 2001, putting a hold on more than 100,000 pending claims against it.

The Environmental Protection Agency added Libby and the surrounding area as a Superfund site in 2002 and declared a public health emergency in 2009. The EPA spent more than $600 million to clean up 2,600 homes and properties and removed more than 1 million cubic yards of contaminated soil, according to the agency.

The company and its executives were acquitted in 2009 of federal charges that the company had conspired to conceal the mine’s health risks. Grace emerged from bankruptcy in 2014 after a legal settlement that set up trust funds to pay for current and future asbestos victims’ medical costs. The company agreed to pay $250 million for the cleanup in 2008.

Asbestos victims also sued the state of Montana, saying that state officials knew the danger but failed to stop it. Settlements in 2011 and 2017 totaled $68 million.

The threat isn’t over. People are still being diagnosed with asbestos-related diseases. Three decades or more can pass between exposure and the development of symptoms, according to the Centers for Disease Control and Prevention. 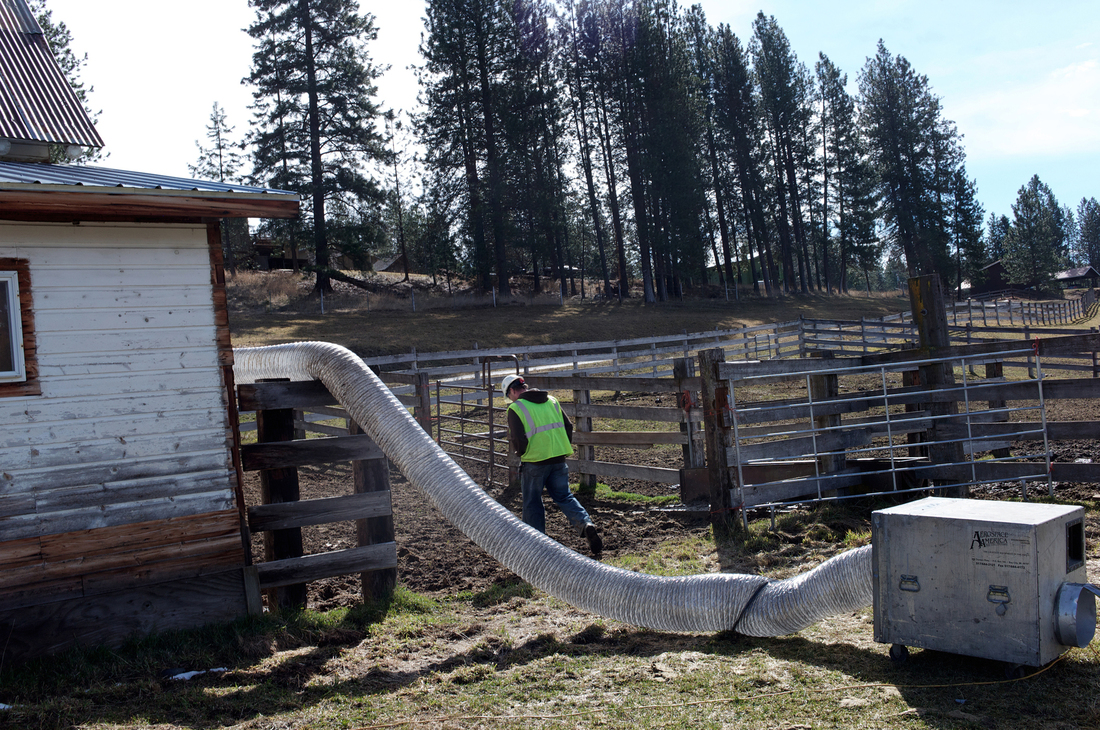 A decontamination crew from the Environmental Protection Agency works on extracting asbestos fibers from a barn in the Libby area. The EPA has cleaned thousands of homes, buildings, and public spaces in the most expensive environmental clean up in American history. 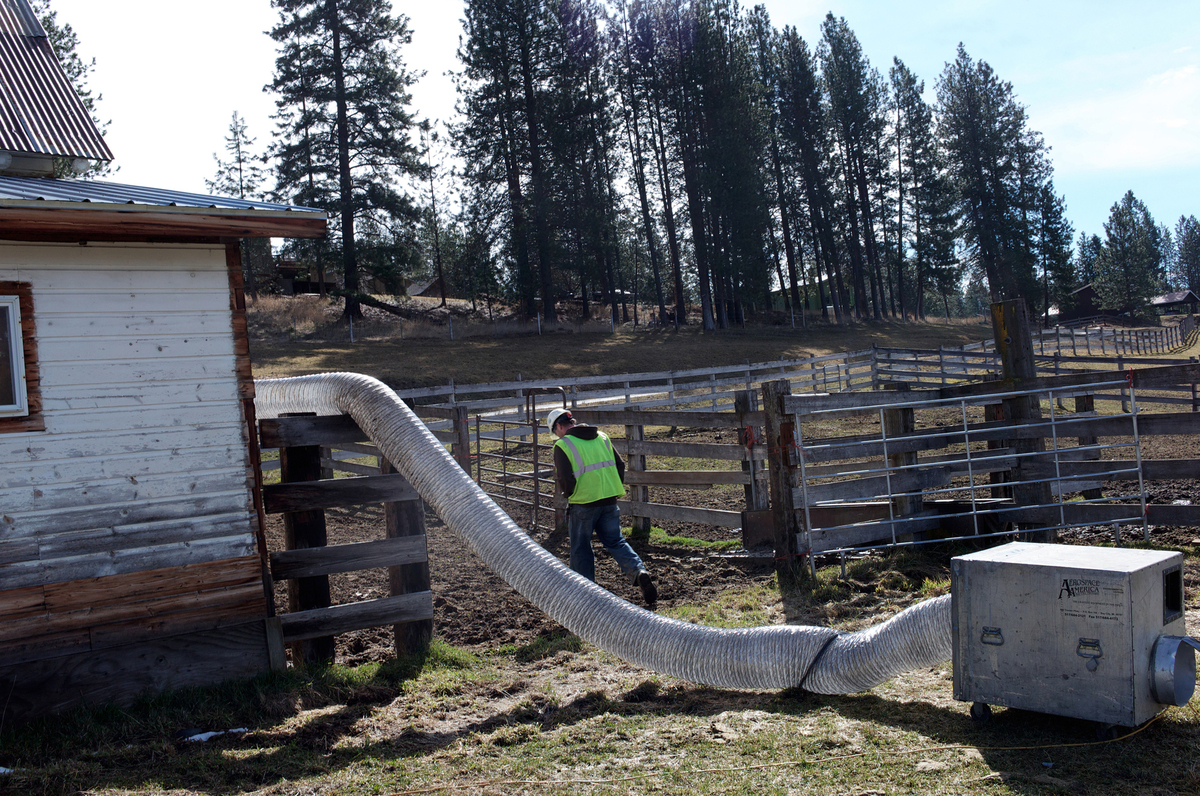 A decontamination crew from the Environmental Protection Agency works on extracting asbestos fibers from a barn in the Libby area. The EPA has cleaned thousands of homes, buildings, and public spaces in the most expensive environmental clean up in American history.

Also, the former mine site and surrounding forest have not been cleaned, leading the EPA to classify the Superfund site as still not under control for human exposure to asbestos. Those most at risk of exposure are loggers, firefighters and trespassers, the EPA said.

The county public health officer has issued an order requiring people in the area to wear masks in public, regardless of how many cases of COVID-19 the county has — a more stringent rule than the statewide requirement to wear a mask in counties where there are four or more active cases of the viral disease.

Though many in the community have accepted public health guidelines to avoid the coronavirus, a strong libertarian streak runs through this remote county on the U.S.-Canada border, where residents’ distrust of government is heightened by the town’s history with the mine.

Doug Shaw, 69, is another resident with lungs scarred from breathing in asbestos. He blames W.R. Grace and the state government for covering up the contamination for decades, and calls Libby’s asbestos deaths murder.

“They profiteered off our precious lives and soul,” Shaw says.

Grace officials did not directly respond to Shaw’s accusations, but instead referred to the company’s financial relief fund for residents with asbestos-related illness.

Shaw is also frustrated by the government’s coronavirus-related restrictions on events and businesses.

“It’s nuts. Nobody has to live like this. We need to get back to work,” he says.

The county has allowed large public events, such as a rodeo and an international chainsaw competition, to take place. The local economy is dependent on tourism cash from those events, but there is worry that visitors could help spread coronavirus through the community.

“We need people to come here and spend money and jolt the economy,” Fahland says. “Problem is, with that rodeo, there were faces in that crowd that have different license plates that came from different places that may have had issues.”

Julie Kendall works as a phlebotomist at a local hospital and was diagnosed with an asbestos-related disease two months ago. She echoed that concern.

“These people that come to these events from out of town are going to our gas stations and our grocery stores,” she says. “They could be exposing you right there.”

Kendall sat at a picnic table near some railroad tracks where she was exposed to asbestos as a child. The area used to be home to a community swimming pool and children would play near piles of mine waste. She says she sees a similarity between asbestos and the novel coronavirus.

“It’s unseen,” she says. “You can be doing the most innocent thing and it could still get you.”

But Kendall also believes those parallels have given folks like her a leading edge on dealing with this pandemic.

“We’re already afraid here,” she says. “So it’s kind of like one more shake of the dice. You can’t live every day in fear. But here we do.”

This story came from a reporting partnership between NPR, Kaiser Health News and the Mountain West News Bureau.