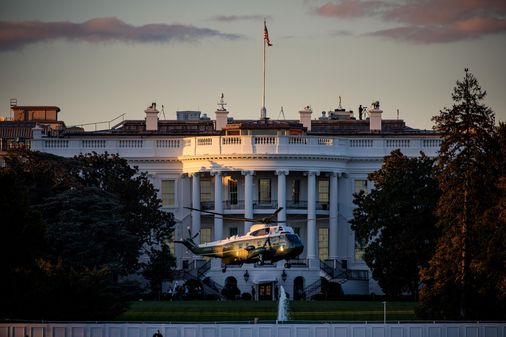 Even Jimmy Carter’s staff, in 1978, initially sought to keep his hemorrhoid pain from the public.

“While there have been a few rare exceptions, such as Dwight Eisenhower’s transparency regarding his heart disease, the historical norm has been less than full disclosure,” said Dr. Jacob Appel, a Mt. Sinai School of Medicine psychiatrist who has studied the health of politicians and presidents.

The revelation early Friday morning that Trump had been diagnosed with COVID-19 comes after years of obfuscation about the 74-year-old’s health, and many worry the public will continue to be left in the dark about his condition.

“The truth is that nobody other than the president, his physicians, and those in his inner circle know the full truth,” Appel said. “If history is any guide, we will not know the extent and details of President Trump’s illness until long after he has left office.”

Those concerns increased on Saturday morning when Navy Commander Dr. Sean Conley, Trump’s physician, failed to answer basic questions about the president’s health, instead offering conflicting details about his diagnosis while painting a rosy picture of his symptoms.

Standing in front of Walter Reed National Military Medical Center in Bethesda, Md., where the president was taken on Friday, Conley described the president as “doing very well” and “great.”

“We are extremely happy with the progress the president has made,” he said.

But Conley declined to answer questions about whether the president had required supplemental oxygen, his temperature, or when he last had a negative COVID test, among other things. He also set off alarm bells when he suggested that the president was first diagnosed with the virus 72 hours earlier — rather than when Trump alerted the public by Tweet about his diagnosis some 36 hours before.

A short time later Conley issued a statement saying he had misspoke about the 72-hour window, saying Trump had been first diagnosed with the virus on Thursday evening, as originally disclosed.

Meanwhile, after the briefing, a person familiar with the president’s health provided a more sober assessment to reporters at Walter Reed. “The president’s vitals over the last 24 hours were very concerning and the next 48 hours will be critical in terms of his care,” multiple news media reported this person s saying. “We’re still not on a clear path to a full recovery.”

But numerous media outlets, including ABC News, subsequently reported that the president was having trouble breathing and had received supplemental oxygen on Friday at the White House, after his oxygen levels dropped.

The lack of transparency about the president’s health has not been uncommon. Late last year, for example, Trump made an unannounced visit to Walter Reed, which reportedly led to Vice President Mike Pence being put on standby to assume the powers of the presidency.

At the time, then-White House press secretary Stephanie Grisham said — to much disbelief — that the president went to “begin portions of his routine annual physical exam.” The white House has still not provided a full explanation of his visit to the hospital that day.

When Trump was a candidate in 2015, his personal physician, Dr. Harold Bornstein, called his health “extraordinary” and “excellent.”

“If elected, Mr. Trump, I can state unequivocally, will be the healthiest individual ever elected to the presidency,” he wrote, though Bornstein later acknowledged to CNN that the president “dictated the whole letter.”

And two years ago, many questioned the results of Trump’s first formal medical exam after taking office, which listed the president as 6-foot-3 and 239 pounds. If the measurements were accurate — the president is believed to be both heavier and shorter — that would have put his body mass index just below the threshold for him to be officially described as morbidly obese.

After hearing Conley;s briefing Saturday morning, Dr. Matthew Wynia, director of the Center of Bioethics and Humanities at the University of Colorado Anschutz Medical Campus, said he worried the public was hearing “contradictory statements” that make “things even more uncertain than they need to be.”

He called the information provided about the president’s health “confusing and suggests that he might be sicker than we’re being told — and that he might have been sick for longer than we’ve been told.”

Appel and others said there are sometimes good reasons to avoid disclosing a president’s declining health.

“If the American people know the full extent of the president’s health, so do our adversaries overseas, which raises ethical challenges and risks of its own,” Appel said.

But others said that complete disclosure about the president’s health has never been more needed than now, given that the nation is a month away from a presidential election and Trump has been infected with a virus that has killed more than 208,000 Americans and infected 7.3 million others.

Dr. Kavita K. Patel, a primary care physician and scholar of health policy at the Brookings Institution, urged the White House to brief the public regularly on the state of the president’s health, and to have those briefings come from his physician, surgeon general, or the nation’s top virus expert, Anthony Fauci.

Given the lack of transparency about Trump’s medical history, she called on the administration to commit to a “baseline accountability.”

“This is a time when you can’t over-communicate,” said Patel, who served in the Obama administration as the director of policy for public engagement. “Transparency is so important, because it helps people understand a virus that is largely incomprehensible to many people.”

After watching Conley’s Saturday morning, Patel, too, was disappointed.

“Clearly, transparency is completely out the door,” Patel said. “This is just so bizarre. I’ve never seen anything like it. We’re talking about conflicting statements about something that is not subjective.”

Others argued that the nation’s long history of obscurity surrounding presidents’ health — from the lack of disclosure about the severity of Franklin Delano Roosevelt’s polio to Ronald Reagan’s condition after being shot — has changed in the era of social media and a nonstop news cycle.

“We live in a much more transparent time,” said Roger Porter, a government professor who for years has taught a course on the American presidency at Harvard University. “There is little likelihood that, even if they wanted to, presidents today could conceal much for long about their health circumstances.”

But Arthur Caplan, director of medical ethics at the New York University’s Grossman School of Medicine, wasn’t optimistic the public will be better informed as Trump copes with the coronavirus.

He noted that Trump’s doctors can only speak about the president’s health if he authorizes them to do so.

“Politics drives what we learn about ailing presidents,” he said. “I expect nothing different now, given that everyone working inside the White House understands that the political arm controls the messaging.”

There will be many questions in the coming days, such as: will the president’s health permit him to take part in future debates, even if virtual? Is he healthy enough to manage the country, and stand for reelection? Will the disease impair his cognition or affect his long-term health? Is the president really in charge of the country, or is someone else overseeing his duties?

And there will be others about whether the president was too cavalier about the dangers of the virus and didn’t do enough to protect himself by wearing a mask or social distancing.

“There are many, many reasons for transparency to be pushed to the forefront,” Caplan said. “The American people need to know the health status and prospects of a presidential candidate 30 days to the election. The administration has a duty to inform the public.”