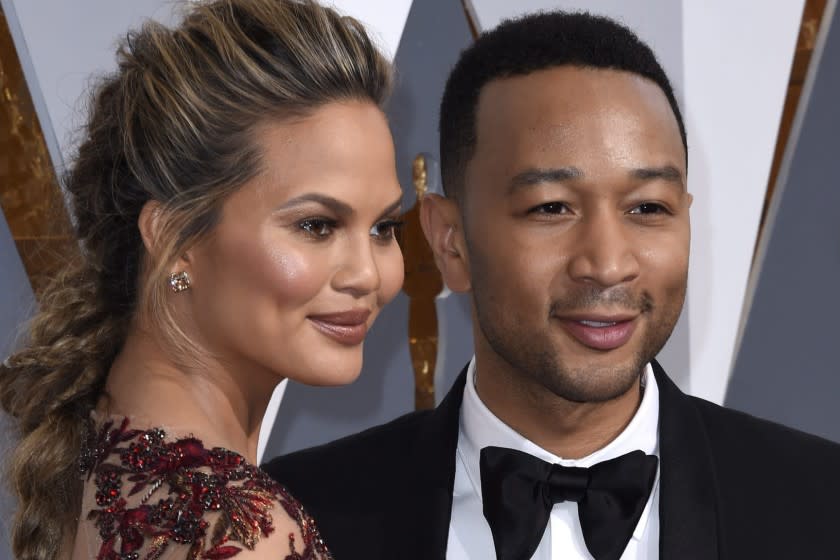 Many people were shocked by the images Chrissy Teigen and John Legend put on their social media platforms Wednesday evening.

The couple had just lost a child to miscarriage and they chose to share their grief with their followers in as close to real time as was humanly possible. One black-and-white photo showed Teigen sitting on the edge of her hospital bed weeping in pain and grief; another framed the couple holding the tiny blanket-swathed bundle of their third child’s body in a classic pose of parental love.

The news startled us all out of our evening social media scrolls, pulled us into one family’s particular and, for many, achingly familiar agony; the images exposed the human heart in all its exquisite and damning variety.

Much love, sympathy and empathy were expressed, but so too was criticism, by those who saw the photos as distasteful — in their public nature, in their immediacy, in their existence at all. A few even chose the moment to make a statement about the couple’s support for reproductive freedom and the legality of abortion, as if a couple’s grief over losing a wanted child was a matter of jurisprudence.

I can’t imagine that either the derision or the attempts to politicize the death of the child Teigen and Legend called Jack will affect the couple in any way. Having been trolled by no less a master of the art than the current president of the United States, they are well acquainted with the perils of living a public life on their own terms.

And they knew exactly what they were doing when they posted those pictures: demystifying the stifling gauze that surrounds pregnancy, childbirth and grief in this country.

With the possible exception of getting married, there is no human condition more mythologized, rhapsodized and commercialized than having a baby.

And while the pat caveat regarding marriage — about one in three will end in divorce — is regularly rattled off even in rom-coms, much less is said about pregnancy statistics; no one wants to cast a pall on such a cotton-candy cloud of culturally amplified joy.

So when Teigen tweeted, “Driving home from the hospital with no baby. How can this be real?” she was speaking to, and for, millions of parents who have experienced the same thing.

Including me. Like countless other women, I had a miscarriage, and while it was far earlier in my pregnancy than Teigen’s, it was still devastating. Like many women, I was unaware at the time how common miscarriage is, or of how many people I knew had experienced it. Like many women, I initially downplayed what was happening — just a bit of bleeding — and spoke little about it after it became clear there would be no baby. What do you say to a friend or co-worker who asks how your weekend was when you spent it having a miscarriage? “Fine”?

Because I am a writer who often writes about personal things, I wrote about the loss, but not until two years after it happened. Two years that included the birth of my first child, a healthy baby boy. During those two years, I had heard many stories from friends that were far more tragic than mine, but I tried to write as honestly as I could about the grief and anger and sense of failure, the shame and fear and uncertainty that even an early miscarriage can cause. People told me I was brave.

Maybe, but even if I had the digital tools or the platform that Teigen and Legend have, I could never have done what they did. I am not that brave. Grief is easier to express when it has been, to a certain extent, overcome.

And if we’re being honest, that is how Americans like their grief — in the past tense, infused more with melancholy and wisdom than the raw, shrieking pain of those early moments when we realize what had been there is now gone. Forever.

Miscarriage, even more than other forms of loss, is something far more commonly discussed in the past tense, after everyone has collected themselves and can see things in perspective, whatever that perspective might be. Some see it as the loss of a child, others as the loss of a possibility.

Too often, we like to name our grief, categorize it, place it in some sort of hierarchy. This gives us the illusion of control, and while we all know from experience that great pain often results in moments of near frenzy, we don’t really want to see that part when it happens to others. At least not in public. No, we prefer to separate ourselves from that raw experience by offering comfort and support with the traditional, agreed-upon gestures of flowers or food or words of hope.

The immediate, visceral human reaction to loss is so beyond the reach of those gestures it makes us feel helpless; it cannot be comforted, only endured. And so, many believe, that sort of pain should occur only in private.

Why, some wondered, would Teigen and Legend take photos of those terrible moments, and why share them publicly?

Because those moments happened, that’s why. Because they happen all the time, to all sorts of people. Because pregnancy is not all adorable baby bumps and weird cravings and super cute onesies. Because miscarriage is not a statistic any more than a death from COVID-19 or any other cause is a statistic.

Life and its losses cannot always be wished into a comfortable narrative of self-discovery or curated into shared wisdom. Tragedy walks among us at all hours of each day. Sooner or later, every one of us feels its inexorable, impersonal power. Something that was ours is torn away, and we howl in pain and protest

That is what Teigen and Legend shared with the world — that one minute they had been happy, then anxious and, finally, heartbroken.

Also deeply honest and very brave. Somewhere, the boy who would have been Jack must be proud.