The humblest food becomes wondrously photogenic in the films of Chen Xiaoqing, creator of the hit Netflix series Flavorful Origins and its progenitor Once Upon a Bite. Dumplings are crafted on timber boards amid billows of flour. Steam shrouds mottled crabs, cooking with ginger and chili in in tall stacks of wicker baskets. Fishermen wade into crashing surf on wooden stilts to snare sardines with A-frame nets. There are aerial shots of emerald rice terraces, time-lapse sequences of drying bricks of tea, and mortar-eye views of pestle-pounded spices.

There’s not a fast-food restaurant or production line in sight in this romanticized glimpse of a homespun culinary culture sadly threatened by industrial kitchens, agribusiness and progress.

“Our food must be delicious, beautiful, with a legacy and connection to local culture and geography,” Chen tells TIME in his Beijing office. “For the people, they must really love the food, put in their labor and have a deep connection with it.”

Chen, 55, originally from China’s eastern Anhui province, has charged himself with keeping many of his homeland’s food traditions alive. Over the past three decades, the world’s most populous nation has become the world’s number two economy and home to the planet’s largest middle class. In the rush to sate 1.4 billion bellies, corners were cut and standards plummeted, leading to a slew of food safety scandals. Today, though, the impetus has shifted from quantity toward quality natural produce. “People are leaning towards healthier options, not just vegetables, but wanting to know their food is processed with care,” says Shanghai-based food blogger Rachel Gouk.

It’s a trend epitomized by the critically acclaimed Flavorful Origins, a series of short films and the first original Chinese documentary to be bought by Netflix. Chefs chosen for inclusion in Chen’s work can see demand for signature dishes soar hundred-fold overnight. The first series spotlighted the coastal cuisine of Guangdong’s Chaoshan region, with the second focusing on the fresh, fragrant spices of southwestern Yunnan province, which draws much influence from neighboring Laos and Myanmar.

The third season, set in China’s central Gansu province, debuts on Netflix next month. Gansu is a thin strip of territory stretching more than a thousand kilometers from dunes in the north to lush mountains in the south. It also boasts a significant Muslim minority. “So they have really different types of food that reflect the local terrain and [cultures],” says the filmmaker.

Chen has given himself an additional brief at a time of historic tensions between the U.S. and China. The superpowers may be embroiled in a trade war, accusations of spying and IP theft, the sanctioning of officials over the detention of one million Uighur Muslims in China’s far west, and the origins of the COVID-19 pandemic—but Chen hopes that food can help soften his country’s image. “Through beautiful food we want to help the world better understand China and the Chinese people,” he says. 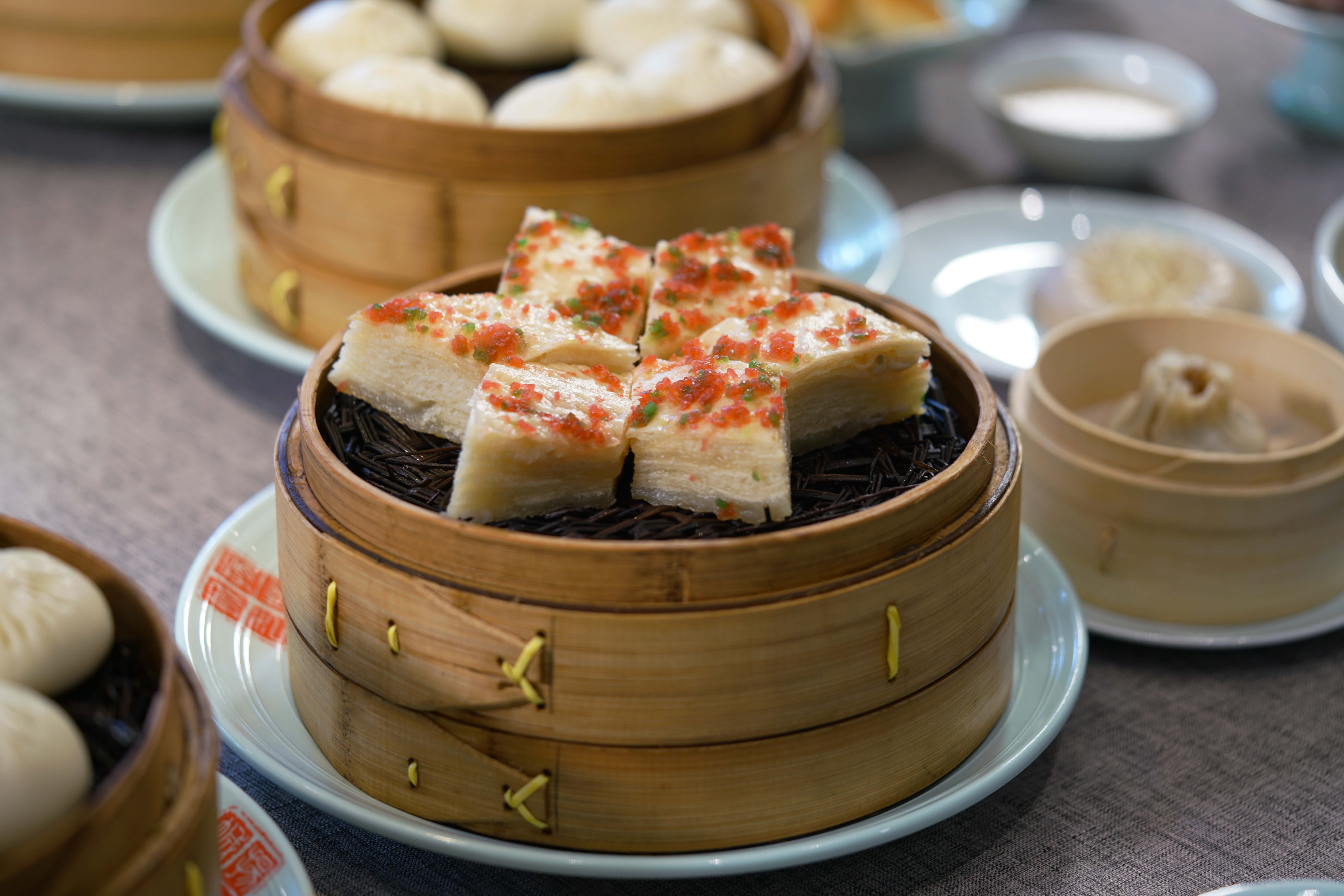 In this still taken from Season 2 of the series Once Upon a Bite, which debuted on Apr. 26, 2020, a dish known as multiple-layer oil cake is seen on a table in Yangzhou, China.

Chinese food in the U.S.

The U.S. love affair with Chinese cuisine is long and complex. In fact, one of the most American staples, ketchup, is actually Chinese in origin. The name ketchup derives from the Hokkien Chinese kê-tsiap, referring to a fermented fish-based sauce that became popular with colonial Britons as far back as the 18th century.

When the first Chinese immigrants arrived in American in the mid-19th century, xenophobic ditties made reference to their unfamiliar eating habits. But in New York City, Chinatown flanked the Jewish Lower East Side, and the Jewish community became early adopters of the new cuisine. By 1899, the enduring tradition of Jews eating in Chinese restaurants at Christmas had already been documented. In the early 20th century, the Boston Globe was telling readers to consider Chinese themes for their wedding banquets, while the Chicago Tribune declared Chinese restaurants the perfect place to woo a girl on a first date.

“Chinatowns, which had been framed as dens of iniquity, became the first counterculture cool among the American cognoscenti, and then became mainstream,” says John Pomfret, a former Beijing bureau chief for the Washington Post and author of The Beautiful Country and the Middle Kingdom: America and China, 1776 to the Present.

When a devastating earthquake flattened San Francisco in 1906, that city’s Chinatown was prioritized for reconstruction because of the tourist dollars it brought in. By 1919, the American Chemical Society was advising that Chinese food was good for health. A decade later, nearly a third of American counties had at least one Chinese resident, many of whom opened restaurants. “The Chinese became the most dispersed ethnic group in the country,” says Pomfret. Today, there are more Chinese restaurants in the U.S. than McDonalds and KFC outlets combined.

The question is whether food can still build bridges today. A Pew Research Center survey published in July found 73% of American adults had a negative view of China, the highest since the question was first asked 15 years ago. Verbal attacks and assaults on Asian Americans have soared since the coronavirus took hold. At the recent presidential debate, Donald Trump again sought to assign blame for the pandemic, saying “It’s China’s fault.”

For Chen, however, there are more commonalities than differences. He points out that around 10,000 years ago people across the world began cultivating wheat. In the West, they used it to bake bread; in the East, they steamed buns. “People may focus on the difference between East and West as being like fire or water,” says Chen. “But in terms of food—bread or buns—it’s not that drastic.”

Not all of China’s culinary culture meets with acceptance. The consumption of rare, wild species for their purported health benefits has long been of concern. The 2002 to 2003 SARS pandemic was eventually traced to civet cats sold for consumption at a market in China’s southern Guangdong province, and a leading—though unproven—hypothesis is that there is a similar provenance for coronavirus, which first came to light in a market in the central city of Wuhan.

Chen says he is “very concerned” about the protection of wildlife, never features endangered creatures in his programs and even puts health disclaimers on scenes that feature raw shellfish.

“In truth, most Chinese people eat a limited selection of food,” he says. “They don’t even eat steak rare because they think it’s unhygienic. They have to cook everything. The sample of the coronavirus found in the market has nothing to do with food; it has to do with the modernization of the entire country. If we can ventilate and make our markets more sanitary, such problems can be solved.” 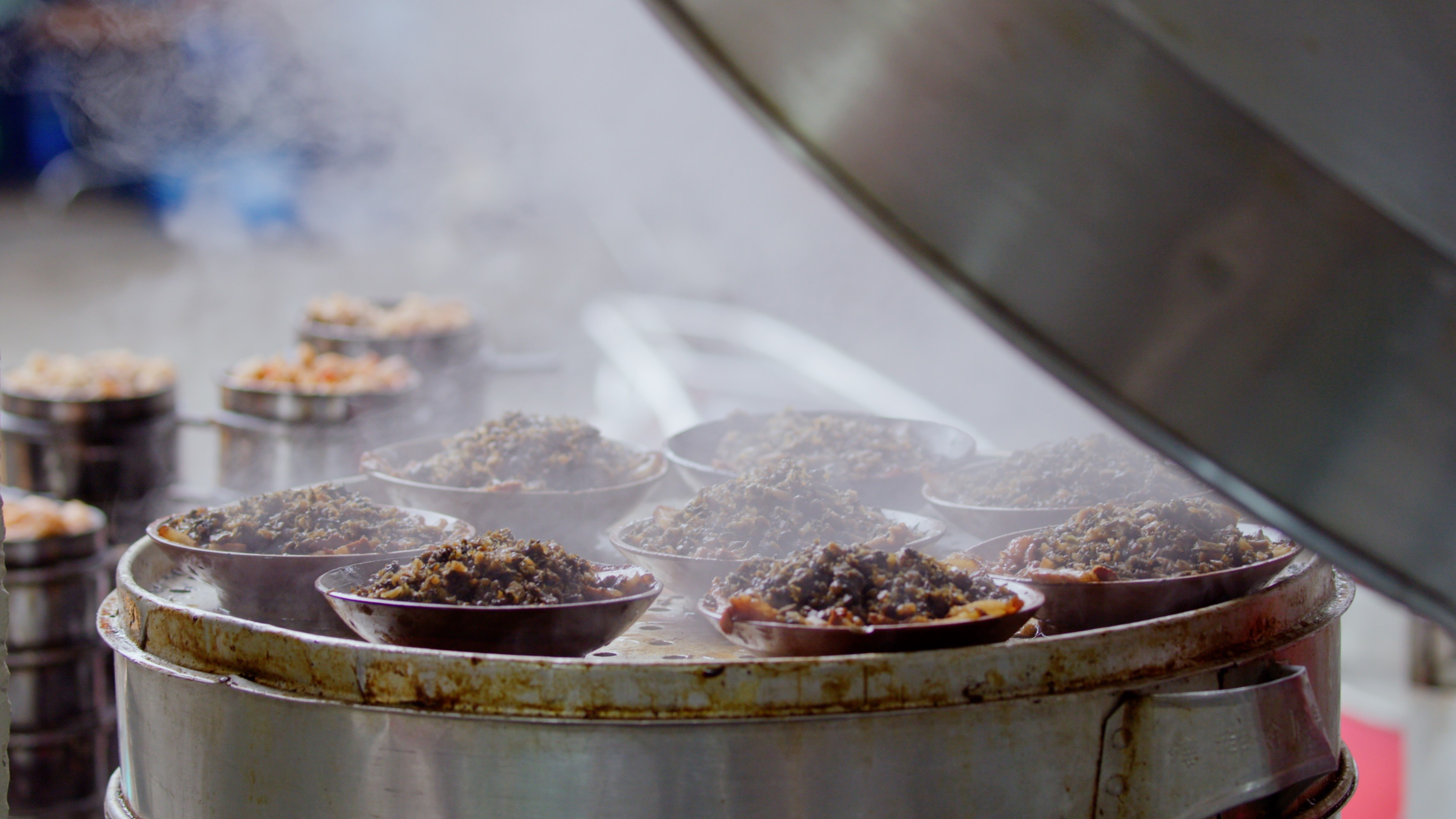 In this still taken from Season 2 of the series Once Upon a Bite, which debuted on Apr. 26, 2020, dishes of braised pork rice from Sichuan, China are being steamed.

In some ways, Chen is riding a wave of national interest in a sentimentalized past—a craze known as fugu. Increasingly, Chinese millennials are donning hanfu robes that date from the Tang Dynasty, playing bamboo flutes and quaffing Osmanthus wine in order to reconnect with their cultural heritage. One father in Sichuan province recently dispensed with the family car and decided to take his son to kindergarten on a bull. He said that while using this archaic form of transport, he would “explain ancient poems and traditional culture” to the youngster. For a rapidly urbanizing society, increasingly disillusioned by a hyper-commercialized race to riches, such affectations prove alluring.

Some academics frame this cultural revival in terms of a restored national pride. It could be seen as “embarrassing that Chinese people attend social functions or major international occasions dressed in suits, ties, and leather shoes, which not only fail to represent their homeland, but also imitate the garb worn by the erstwhile outsiders who once brought China to its knees,” writes Yang Chunmei, a professor of Chinese history and philosophy at Qufu Normal University.

China’s strongman president, Xi Jinping, has certainly made many calls for the preservation of Chinese tradition while decrying the influence of “Western values”—even if much that tradition is awkwardly rooted in Imperial feudalism and at clear odds with the Marxist doctrine that the Chinese Communist Party is committed to upholding.

In this context, Chen’s work coalesces national identity at home even as it seeks to break down barriers abroad. He has set his eyes beyond China, citing Lebanon as his dream destination (“It’s got European influence, Arab influence, that’s very interesting”). He became enamored with the Middle East while filming in Jerusalem.

“We saw that Jews, Arabs, Christians have different religions and cultures,” Chen says, “but they all appreciate the same food.”

Given the intolerance that roils the Middle East, it’s a bit of a stretch to posit some sort of regional amity based on a shared love of olives and flatbread, but Chen is undeterred.

“There are constantly quarrels and tensions, not only between China and America, but between all different cultures,” he says. “The best way to solve them is communication—and people always talk over food.”

Get The Brief. Sign up to receive the top stories you need to know right now.

Write to Charlie Campbell at charlie.campbell@time.com.