For public health leaders and community advocates across the Bay Area, California’s new health equity metric, which aims to tackle coronavirus disparities in communities of color, is a forward-thinking plan that will aid those hardest hit by the virus.

But for business owners like Danielle Rabkin, the metric is a potential new roadblock in a year full of them. Rabkin’s business is on the brink of closure. After months of uncertainty and evaporating revenue, she was allowed to reopen her San Francisco gym, CrossFit Golden Gate in September, at limited indoor capacity.

A few weeks later, the state came out with the new health equity metric rule, adding another layer in determining when counties may advance reopening and roll back shelter-in-place restrictions, according to the state’s color-coded, tiered system for assessment.

San Francisco County didn’t meet the equity metric required for advancement to a less-restrictive tier last week, the state’s first pass at releasing the new data. But all nine Bay Area counties met the metric Tuesday, according to data from the California Department of Public Health. 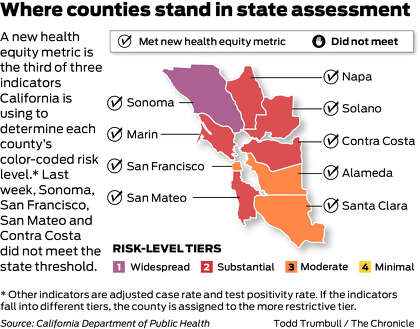 Still, business owners like Rabkin are frustrated with the constant uncertainty that looms over them along with the fear of having to close their doors if their county does not meet the equity metric in the future.

“I absolutely agree that resources need to be directed to communities with disproportionately high case rates, there is no question about that,” she said. “But not at the expense of small businesses anymore, there has got to be a better way.”

The equity metric appears to pit the needs of two communities — both devastated by the coronavirus pandemic — against one another. On one hand, the plan helps counties focus their resources on the Black, Latino and Pacific Islander communities getting sicker and dying at significantly higher rates. And, on the other hand, this well-meaning initiative may stall businesses from at last opening their doors fully, pushing many into further economic chaos.

Rabkin said that larger businesses may be able to weather the storm, but small businesses may not. San Francisco remains in the orange tier of the state’s color-coded reopening system, which allows for most businesses to be open but with limited customers, including indoor retail at a 50% cap, indoor dining at 25%, and indoor gyms at 10%.

“It does not seem reasonable to keep businesses closed longer and keep low occupancy caps both of which are extremely harmful to our chances of survival,” Rabkin said. Since March, she’s lost about 90% of her clients, she said.

Santokh “Sam” Sohal and his son, Maneet Sohal, own several business ventures in the Bay Area, including bar 3rd St. Tap Room, near the Moscone Center, and Internos Wine Bar, close to the University of San Francisco. They are in the process of closing down the latter due to their inability to pay rent as revenue shriveled up. They are trying to hold on to 3rd St Tap Room.

“I think the new rule is just going to add and compound the difficulties we face,” Sam Sohal said. “We do need to take care of everyone in our community, but the city should be doing more. They are responsible for the health crisis, not us.”

Community groups and public health advocates, while sympathetic to the plight of business owners, say the metric sends a message of solidarity and takes a critical, “all hands on deck” approach in protecting disadvantaged communities.

“One of the reasons why equity seems to be so elusive is that only certain people think they are stakeholders. But the truth is that everyone is a stakeholder,” said Norma Garcia, policy and advocacy director for the Mission Economic Development Agency. “Everyone has a part in ensuring equity, even if it seems like a totally foreign concept, or something that doesn’t really apply to them.”

Garcia said the metric is an opportunity for businesses to advocate for public health.

“The notion of equity for many might feel oppressive,” she said. “But the goal is that when we achieve it, everybody is in a better place.”

While failing to meet the metric cannot pull counties back into more restrictive tiers, it can prevent them from moving forward with reopening.

The equity metric relies largely on the positive test rate — the percentage of coronavirus tests that come back positive, which is widely used as an indicator for when it’s safe to ease restrictions and reopen a local economy. Higher positive test rates indicate the virus is spreading more quickly.

Business groups such as the San Francisco Chamber of Commerce, are supportive of the measure saying, “If any of our communities are vulnerable to COVID-19, then we are all vulnerable.” The Hispanic Chambers of Commerce of San Francisco, an umbrella organization representing smaller Hispanic chambers in the Bay Area has not put out a statement in support or against the measure just yet, CEO Carlos Solorzano-Cuadra said. But there have been impassioned discussions among his members which have brought up arguments for and against the equity metric.

“We (Latinos) are among the ones most affected by the virus,” Solorzano-Cuadra said. “We understand the critical need for our communities to get better, but Latino-owned businesses have also closed at alarming rates. So how do you make sure people recover and at the same time, other people’s livelihoods aren’t taken away? It’s just a sad situation for everyone.”

Latinos account for 50% of coronavirus cases in San Francisco, despite making up just 15% of the city’s population, according to data from the city’s department of public health. Last month, Mayor London Breed allocated $28.5 million for contact tracing, testing and outreach focusing on neighborhoods most impacted by the virus in San Francisco — the Mission, Bayview, Tenderloin, Excelsior and Visitacion Valley.

“The COVID-19 pandemic highlights what we’ve known for too long – where you live too often determines your chance of living a healthy life, said the California Department of Public Health in a statement Monday. “As such, the state is using the equity metric to encourage local governments to identify communities in need and direct resources to address COVID-19 health disparities.”

California taking a stand to say that equity is an important consideration in reopening is important, according to Dr. Kirsten Bibbins-Domingo, an epidemiologist at UCSF and co-founder of the Center for Vulnerable Populations at Zuckerberg San Francisco General Hospital.

“This is both about recognizing the communities that are most devastated by the pandemic but also it’s just pragmatic. You’re not going to get your county reopened safely if you have pockets of high transmission. It just doesn’t make any sense. So this metric is saying, ‘we’re all in this together,” Bibbins-Domingo said.