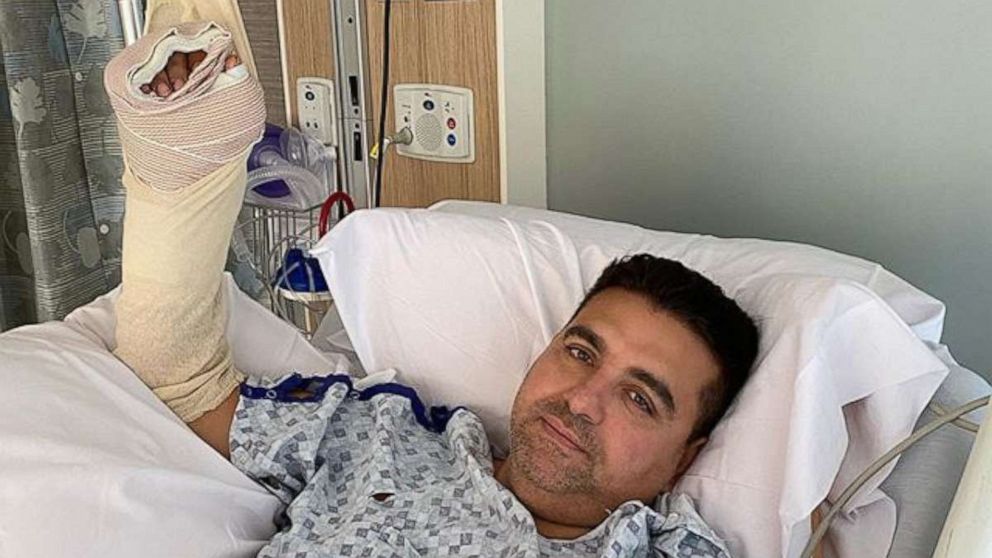 The celebrity baker thanked his family, fans and doctors for their support.

As the “Cake Boss” star recovers from “a crazy freak accident” involving a bowling pinsetter that impaled his dominant hand, Buddy Valastro said his fans, family and doctors have touched his heart with their outpouring of support and prayers.

The celebrity pastry chef and his son Marco, who stepped in to safely help his dad during the incident, joined “GMA3: What You Need to Know” and explained how they were both able to remain calm under pressure and get to the hospital without a hitch.

Valastro said “it was a typical Sunday” at his house getting ready to watch the New York Giants when the bowling system malfunctioned.

“The machine got stuck and I went behind it to fix it, which I’ve done 100 times, and for one split moment I must’ve turned my head and then my right hand got caught between a fork and this other mechanism that goes through the fork and it kind of wedged my hand in there,” he explained. “It blew through my ring finger and my middle finger as it barbed in my hand and I was stuck. It kind of crushed my thumb cause it was still moving back and forth.”

“For some crazy reason I’m on top of this thing and got this metal rod through my hand, blood is everywhere,” he recalled. “I don’t know what kept me calm cause I was in excruciating pain.”

But thanks to the quick work of his two sons and brother-in-law, the chef was able to calmly ask them to get saws and pliers and told them, “You gotta get me off this machine. I gotta get to the hospital.”

“I couldn’t be prouder of my two sons — they jumped into action — and within five minutes they had to undo a bolt, saw off one piece of metal, and then I was in my driveway. We jumped into my brother in law’s car and drove down to Morristown Hospital,” Valastro said.

Marco Valastro, 13, told “GMA” that even in the heat of the moment he knew he had to keep his own nerves in check.

“I didn’t want to freak out because I knew if I freaked out I feel like I would’ve made everybody else a lot worse too,” he said. “I knew I had to stay calm and I just had do everything I can to get him off the machine with my uncle and my brother.”

He said he just ran to the toolbox to collect “all the tools they needed so they could get him out of the machine.”

Valastro said a major tendon was damage but “it’s way too early to say exactly what’s going to happen.”

“I hope to make a full recovery. I’m praying, we’ve got a lot of prayers,” he said. “Moments like this actually do other things for you because I’ve always appreciated doctors and first responders and people who take care of us but when you wind up in a situation like this and they just took care of me and nursed me back to where I am. I am so forever grateful I want to kiss their hands and just thank them for doing what they did.”

Once he was back home after his initial surgery, Valastro said he took a video to show the doctors at Hospital for Special Surgery in New York City “exactly happened to my hand, because I knew I was gonna need other surgeries.”

He went on, “I underwent another surgery on Monday and then I was released on Wednesday. Thank God for everybody and all the hospitals and everybody who really took care of me. I appreciate it.”