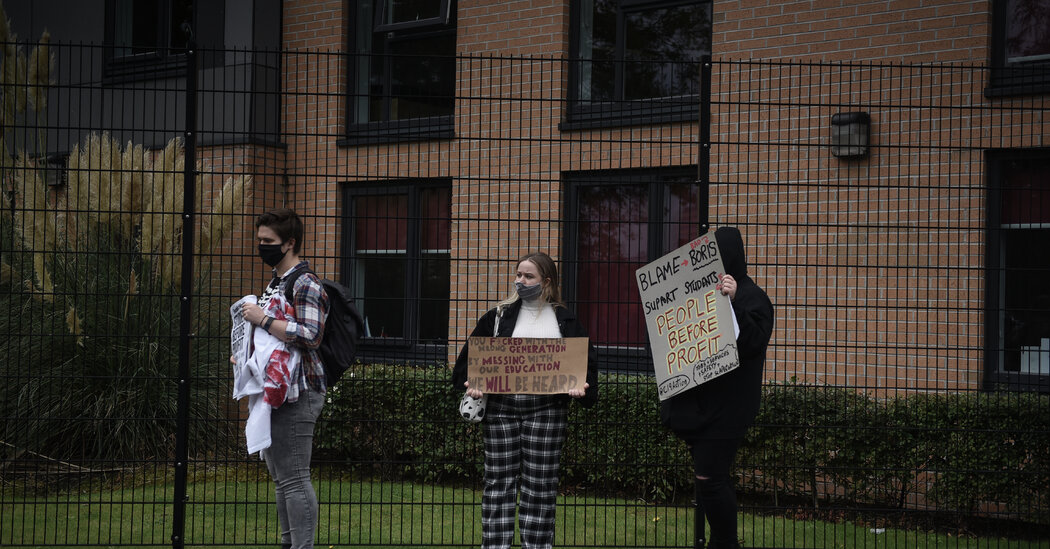 Inside a dormitory at Manchester Metropolitan University, trash piled up in shared kitchens. Students washed their clothes in bathroom sinks. Security guards were stationed at the gates, keeping anyone from leaving or entering.

When the virus tore through student housing, students were largely left to fend for themselves, nurse roommates back to health, and rely on food deliveries from their parents who drove hours to deliver food, and lawyers who offered pro bono help.

“It really was abandonment,” said Lucia Dorado, a freshman, speaking about the university’s response. “They put in barely anything to battle this, and it’s come at the expense of our mental and physical health.”

To date, roughly 90 British universities have reported coronavirus cases. As in the United States, outbreaks are seeping into surrounding towns. Worst of all, thousands of British students are confined to their halls, many living with infected classmates and struggling to get tested themselves.

As in the U.S., financial pressures drove schools to reopen. For years, the British government has cut funding, so universities increased enrollment to meet the bottom line. Little aid materialized during the pandemic, so many campuses plowed forward as planned.

“Students are money in the bank, and as long as we’re on campus they’ll worry about the consequences later,” said Aslan Warburton, a freshman at Manchester Metropolitan. “The financial side has taken priority over student well-being and the greater good.”

Campus jobs in the Covid era

New York University has hired about 300 students as public health ambassadors. For $15 an hour, they walk around campus, encouraging others to wear face masks and to keep their distance.

One such ambassador, J.J. Briscoe, spoke with our colleague Amanda Rosa. “I really would like to stay and not have to go home,” said Briscoe, a freshman from Kansas. “It was something I could do to help.”

But it’s not always working. Once, he asked a small, mask-less group of students to cover up. When he came back around the corner, they rushed to put them on again.

“This was just awkward for all of us,” he said.

A tale of teenage transmission

The Centers for Disease Control and Prevention took a close look at a 13-year-old girl who contracted the virus and spread it to her family. Here’s how the outbreak happened:

Her example provides yet more evidence that while adolescents may not get as sick from the virus as adults, they can quickly spread it to others. The study adds to evidence that teenagers are more likely to become infected and spread the virus than younger children.

The latest on how schools are reopening amid the pandemic.

“It re-emphasizes the importance of basic public health precautions, even with people we know and love,” said Megan Ranney, a professor of emergency medicine at Brown University who was not involved with the study.

“I was first captivated by the experience as a freshman at Howard University,” Charanna wrote. ‘But it wasn’t until my return as an alumna to the Mecca (a nickname for the school adopted by many students) that I appreciated the experience of Black fellowship on a deeper level.”

In the school reopening effort, nurses have a crucial role.

“In order for us to make sure the students are well taken care of, even at home, we have to keep calling, touching base with parents, with students,” said Kenya Brown, the school nurse for a public school in Jamaica, Queens.

On top of her regular duties, she’s become a point person for reopening protocols. Before school reopened on Oct. 1, she had planning meetings with the building management team, the custodians, and the people in charge of food and school safety.

“Some students have lost parents and grandparents,” she said. “It’s a humbling situation.”

So if you’re a student or parent, thank your school nurse. They’re keeping your community afloat and your school open.

Jonathan Wolfe contributed to the Coronavirus Schools Briefing. You can reach the team at [email protected]

Sign up here to get the briefing by email.