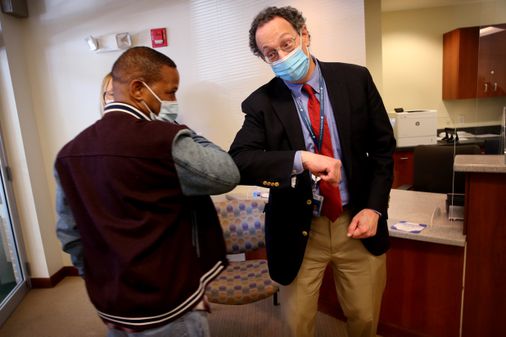 The hospital is among 90 sites testing to see whether the prospective vaccine made by Moderna is safe and protects people against the coronavirus. The Cambridge biotech’s vaccine is among 11 candidates worldwide that have entered late-stage clinical trials.

“We want our study and enrollment to be representative of the epidemic and the communities disproportionately impacted,” said Baden, who is also one of three leaders of the national study.

Since the study began in the first week of August, Brigham and Women’s has recruited “many hundreds” of participants, he said, adding that he was not free to say exactly how many. Recruitment is continuing and is likely to be completed in “weeks, if not sooner,” Baden said.

Half the participants enrolled nationwide will receive the vaccine candidate, and half will get a placebo, in two injections 28 days apart. Then researchers will watch to see if those who received the vaccine are less likely to get infected. The majority of the Boston participants have received both injections, Baden said.

Some 40 percent of the Boston enrollees are people with health conditions that put them at higher risk of severe infection, and more than 25 percent are elderly, Baden said.

Moderna, like all of the other vaccine makers, wants to make sure it gathers adequate information on the vaccine’s effectiveness among the people most affected by the epidemic, which has disproportionately struck people who are Black and Latino, as well as those with underlying conditions such as heart or lung disease.

Nationwide, the Moderna study has enrolled 28,000 of the 30,000 participants needed to evaluate the vaccine, and 33 percent identify as nonwhite, according to a statement from the company.

The company did not provide a breakdown of which groups are represented in the 33 percent, but Reuters reported earlier this week that 7 percent of enrollees are Black.

Moderna has urged the clinical sites “to further emphasize outreach to diverse populations, even if those efforts impact the speed of enrollment,” its statement said. A spokesperson said these efforts have led to “a modest delay in enrollment completion” but probably will not affect the timing of initial results.

Meanwhile, Moderna’s weekly enrollment data show improvements in recruiting diverse participants; among those who signed up during the week of Sept. 28, 49 percent were Hispanic or Latino people, and 26 percent were Black people.

At Brigham and Women’s, the study team has drawn upon long-established relationships in communities hardest-hit by COVID-19, said Dr. Paulette Chandler, who is leading community education and engagement for the vaccine trial.

“People trust us because they come to us for health care,” she said. The hospital also has a community advisory board established during its decades of work on HIV vaccines. “They served as a wonderful connection to the community,” Chandler said.

Still, Chandler said, researchers do sometimes encounter fierce distrust, which springs from a long history of mistreatment by health care providers. They try to engage people in other ways, asking if they’d like to participate in educational efforts or sign up for a registry of potential participants that doesn’t commit them to enrolling.

When people do enroll, Chandler said, sometimes “they’re so excited, they bring family members, friends. It’s fascinating how the network of communication works when people are committed to a common cause.”

Asked whether he expected any results before the Nov. 3 presidential election, Baden said: “I am not interested in the election. This is a scientific process to determine if the vaccine works. . . . That will likely take weeks to months. And we will follow the science.”

Baden said he fears that vaccines will be rejected by the public even if they work, that “we will all be incredibly pleased at how well they work — and the community won’t accept it.”

He hopes that trust in the vaccines’ safety can be won through transparency about the measures taken to ensure they are thoroughly vetted, by federal regulatory agencies as well as independent experts.

In another development, The Wall Street Journal reported Thursday that Moderna has pledged not to enforce the patents related to its vaccine while the pandemic continues, which means that governments and other drug makers don’t need to fear that Moderna would try to block vaccines based on similar technology.