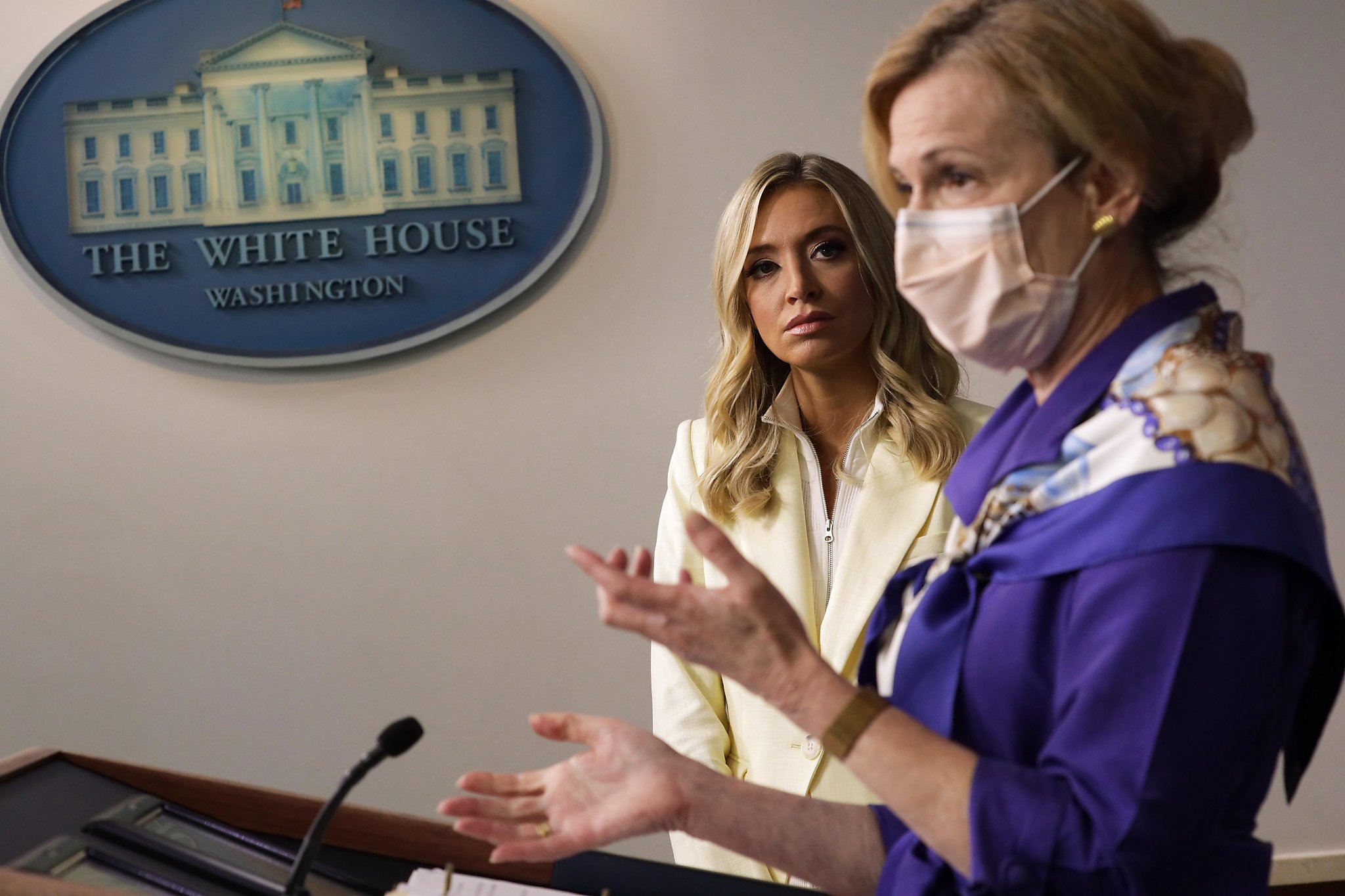 Birx acknowledged the rest of the country learned from the experiences of Connecticut and other northeastern states during the early days of the pandemic. The kind of spread that is happening now, she said, is “very different” from the spread of the coronavirus during March and April.

“The spread of the virus now is not occurring so much in the workplace as people have taken precautions. It’s happening in homes and social occasions and people gathering and taking their mask off and letting down their guard and not physically distancing,” said Birx, noting that was a lesson learned in the South during the hot summer months, when people went indoors for air conditioning.

She repeatedly stressed the need to wear face masks and social distance, as well as more testing for people who have the virus but aren’t showing symptoms and can unknowingly spread it.

Birx met Thursday with Democratic Gov. Ned Lamont, his public health staff, and faculty members, students and staffers from the University of Connecticut at the downtown Hartford campus to discuss the university’s efforts to combat the spread of COVID-19. She credited the university with having one of the highest percentages of students taking in-person classes in the U.S.

Her visit came the same day the Connecticut Department of Public Health issued a COVID-19 alert for New London, urging residents to stay home if they don’t feel well, avoid indoor gatherings with people they don’t live with, limit trips outside the home and wear masks anytime they leave the home.

The department issued a similar alert last week for nearby Norwich. Both communities are in a part of Connecticut that did not see large numbers of infections during the height of the pandemic.

Birx said indoor activities with the heat on are “particularly conducive to spreading events without your mask.” She suggested people increase ventilation with outside air, including cracking a window.

In other coronavirus news in Connecticut:

As Connecticut’s third phase of reopening took effect on Thursday, Lamont said he’s considering allowing communities in southeastern Connecticut, where there’s been a recent spike in COVID-19 cases, to remain in the second phase if they want.

While the concept is still being worked out, the governor said his administration may post maps every two weeks that identify communities with higher rates of infection. Elected leaders of those cities and towns could then decide whether to forgo the third phase, which includes increasing capacity in restaurants, hair salons and libraries from 50% to 75% capacity; allowing 50% capacity at indoor performing arts venues; and increasing capacity at outdoor event venues from 25% to 50% capacity.

While Lamont has consistently supported statewide rules for reopening, Dr. Deidre Gifford, his acting state public health commissioner, said this change makes sense because officials are not seeing a generalized increase in cases across the state. Rather, a map on Thursday showed a concentration in southeastern Connecticut, with Norwich and New London having the highest daily rates of infection in the state, followed by nearby Preston and Windham.

“There’s some logic to having a more localized approach to some of these changes in the phases,” Gifford said.

Last week, the Department of Public Health required nursing homes in New London County to test all staff while recommending the same thing for nursing homes in Windham County. Matthew Barrett, president and CEO of the Connecticut Association of Health Care Facilities/Connecticut Center for Assisted Living, said his organization supports the agency’s recommendation to also have visitors present a negative test result, taken within 72 hours of visiting someone in a southeastern Connecticut facility.

“Given the wide availability of testing for visitors, we think going in this direction is essential,” Barrett said.

The mayor of Waterbury said he and his wife has tested positive for COVID-19.

Mayor Neil M. O’Leary told the Republican-American they got the results Thursday from tests they had taken the day before.

O’Leary, 61, said he and his wife were quarantining at their home, where he was continuing to carry out his duties.

On Sunday, the police chief, Fernando Spagnolo, and an aide to the mayor, David Lepore, tested positive.

Trinity College in Hartford has moved all classes online until at least Monday after a spike in COVID-19 cases there.

School officials say 21 students were found to be infected after tests conducted Monday and Tuesday. That has resulted in 55 other students being placed in quarantine, with more expected as contact tracing continues.

The school said the outbreak appears to be primarily among students who live together in off-campus apartments and housing.

The school has been placed on an “orange” alert level through at least Monday. The school said that means classes will be conducted remotely and athletic facilities will remain closed. Students may pick up food at dining halls, but cannot eat there.

Residence hall common areas will be closed and students should not visit floors other than their own within their dorm. They are also barred from traveling off campus for nonessential reasons. Only employees whose work requires them to be on campus should report to their offices.