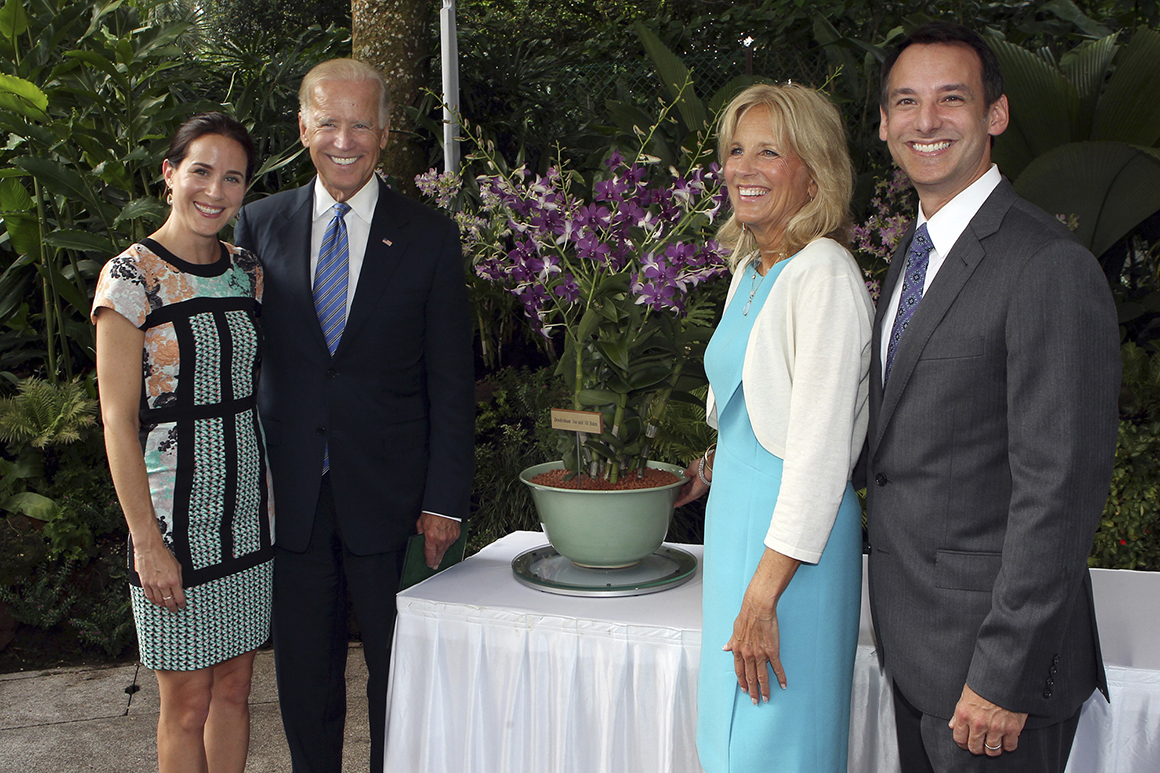 “StartUp Health is putting the full support of its platform and network behind building a post-Covid world that uses technology and entrepreneurial ingenuity to improve health outcomes,” the firm said at the time.

Krein simultaneously advising the campaign and venturing into Covid investing could pose conflict-of-interest concerns for a Biden administration or simply create the awkward appearance of Krein profiting off his father-in-law’s policies. Since the start of the coronavirus outbreak, the federal government has directed tens of billions of dollars in coronavirus medical spending in areas like testing and vaccine research to private firms. It is poised to spend billions more next year and possibly beyond.

The potential conflicts are not limited to the coronavirus for Krein, 53, a Philadelphia-based head-and-neck surgeon who got into venture investing not long after he began dating Biden’s daughter, Ashley, in 2010.

Since StartUp Health’s 2011 launch, when Krein came on as its chief medical officer, it has invested in more than 300 health care businesses, according to its website, which prominently features the term “moonshot” to describe its investment goals — language that echoes that of Joe Biden’s own signature Cancer Moonshot initiative. In its early years, the firm enjoyed close ties to the Obama administration and described Krein as a White House adviser.

“I have little doubt that the relationship to Joe Biden, particularly if he becomes president, would attract the interest of some investors,” said Avik Roy, founder of Roy Healthcare Research, an investment research firm, and a former adviser to the presidential campaigns of Sens. Mitt Romney (R-Utah) and Marco Rubio (R-Fla.).

StartUpHealth did not respond to interview requests, and the Biden campaign declined to make Krein or others tied to the company available for interviews. In response to questions, a campaign official said that Krein does not have a formal role with the campaign but acknowledged that he had participated in calls briefing Biden on coronavirus based on his experience treating patients and coordinating his hospital’s response to the outbreak.

Even informal input or the perception of access can be valuable in health care, a heavily regulated sector that is influenced by federal policy and spending priorities.

“Sometimes, the perception is all you need,” said Laura Huang, a professor at Harvard Business School who studies the early-stage investment process. “Signaling is very important for startups and investors alike, and one signal is high-profile individuals who can help provide access.”

Roy said the firm’s Biden ties could also help it land stakes in hot startups that can be choosy about the investors they take money from. “Those companies will take your calls,” he said. “People who are plugged in have an advantage, and that is a common feature of a lot of heavily regulated industries.”

The influence concerns posed by the firm are compounded by its foreign ties. One StartUp Health fund raised $31 million from investors, including the Swiss drugmaker Novartis and the Chinese insurer Ping An, in 2018. The firm’s website also lists the Chinese technology conglomerate Tencent as a “co-investor” in its cancer moonshot initiative. A spokesperson for Tencent, Meredith Julian, declined to comment.

StartUp Health’s sprawling portfolio of investments, meanwhile, would make tracking potential conflicts of interest a daunting task should Biden win the presidency. If Krein were to obtain an inside track on policymakers’ intentions, or if Biden appointees were to make policies favorable to companies in StartUp Health’s portfolio, there could be grounds for further investigation, ethicists said.

Asked about ethical safeguards that would apply to the firm in a Biden administration, the campaign official pointed to the former vice president’s 2019 statement to POLITICO that “I have never discussed, with my son or my brother or with anyone else, anything having to do with their businesses. Period. And what I will do is the same thing we did in our administration. There will be an absolute wall between personal and private [business interests] and the government.”

From StartUp Health’s inception, Krein and the firm were closely linked to President Barack Obama’s administration and its health policy initiatives, while the firm touted its White House influence.

The firm grew out of OrganizedWisdom, a business founded by Krein’s brother, Steven, in 2006 that made medical information available online and listed Krein as its chief medical officer.

In June 2011, Krein’s brother announced the launch of StartUp Health at the Health Data Initiative Forum, a conference in Bethesda, Md., put on by the Department of Health and Human Services.