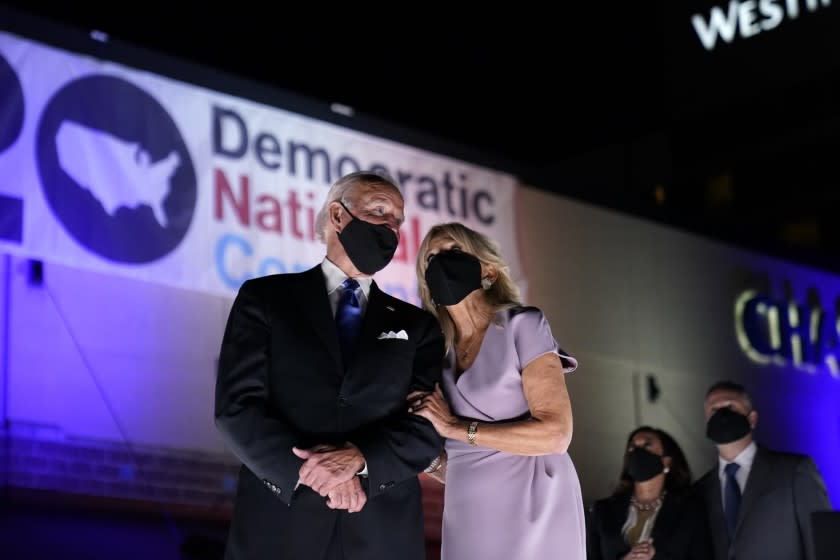 Democratic presidential nominee Joe Biden and his wife have both tested negative for the coronavirus, but some public health specialists say it could be days before the couple can be assured they were not infected.

“Biden is not out of the woods yet,” Dr. John Swartzberg, a UC Berkeley infectious disease expert, said Friday.

“If he was infected on Tuesday [during the presidential debate], you wouldn’t expect him to be positive today…. I am more interested in how he tests tomorrow and Sunday and Monday,” Swartzberg said. “That is when we really want to look at the test.”

About 50% of people infected with the coronavirus never develop symptoms but still are contagious, he said. Trump and his wife are both suffering symptoms, he added.

After learning that aide Hope Hicks had tested positive for the virus, Trump traveled to a fundraising event Thursday in New Jersey, where he reportedly mingled with many people. On Friday afternoon, it was reported that Trump was being helicoptered to Walter Reed National Military Medical Center.

“He certainly exposed a lot of people,” Swartzberg said. “How likely they are going to get infected is dependent upon so many other things.”

Swartzberg said these factors include Trump’s proximity to others, how long that proximity lasted and air circulation.

“The bottom line from a public health contact-tracing perspective is that, if he was within six feet of people for 15 minutes or more, they would be considered close contacts and should go into quarantine.”

He said Trump probably was already infected by Tuesday, despite the negative test result before the debate. Trump may not have had enough of the virus to show up on the test, Swartzberg said.

“So the negative test gives some degree of comfort, though not complete comfort, that he may not have been contagious” Tuesday.

First Lady Melania Trump also was likely to already have been infected during the debate. She and other Trump family members removed their face masks while in the audience, a violation of health rules established for the event by the Cleveland Clinic.

Swartzberg said Biden does not need to quarantine now because he was 12 feet away from Trump during the debate. Still, Biden remains vulnerable because Trump was “screaming frequently” during the event, the physician said.

He said the timing of symptoms experienced by Trump, his wife and Hicks suggests that they were all infected at roughly the same time and that it was less likely that Hicks infected the president and his wife.

“It usually takes, on average, five and a half days before an infected person develops symptoms,” he said.

Dr. Robert Wachter, professor and chair of the Department of Medicine at UC San Francisco, agreed with Swartzberg’s assessment. Biden is probably at “pretty low risk, but not zero risk,” Wachter said. “He is not out of the woods until several more days of negative tests.”

He said others who were with Trump recently, including Vice President Mike Pence, may still be at risk, even if their coronavirus tests were negative Friday, as was reported. Pence attended a COVID-19 briefing with Trump on Monday at the White House.

Sen. Mike Lee (R-Utah), who attended the event for Barrett, announced Friday that he has tested positive for the virus.

Barrett tested negative Friday, but she is at less risk because she had previously contracted the coronavirus, Wachter said. “The chances of getting reinfected are infinitesimal, but not zero,” he added.

Trump received monoclonal antibodies at the White House, “a promising therapy but not proven to work and not approved by the [Food and Drug Administration],” Wachter said. Other therapies are available once a patient is in the hospital.

Wachter said the most disturbing symptom of COVID-19 is shortness of breath. If Trump were suffering that, it “could potentially indicate that things are going sour,” he added.

Dr. George Rutherford, an epidemiology and infectious-disease expert at UC San Francisco, expressed concern that Trump displayed symptoms so soon after getting a positive test result, assuming Trump was tested every day this week.

“If he had negative tests on Tuesday and Wednesday and a positive test on Thursday, and then symptoms Thursday night, that is very rapid progression,” Rutherford said.

He cautioned, though, that without more information about Trump’s previous tests, it was impossible to draw any conclusions.