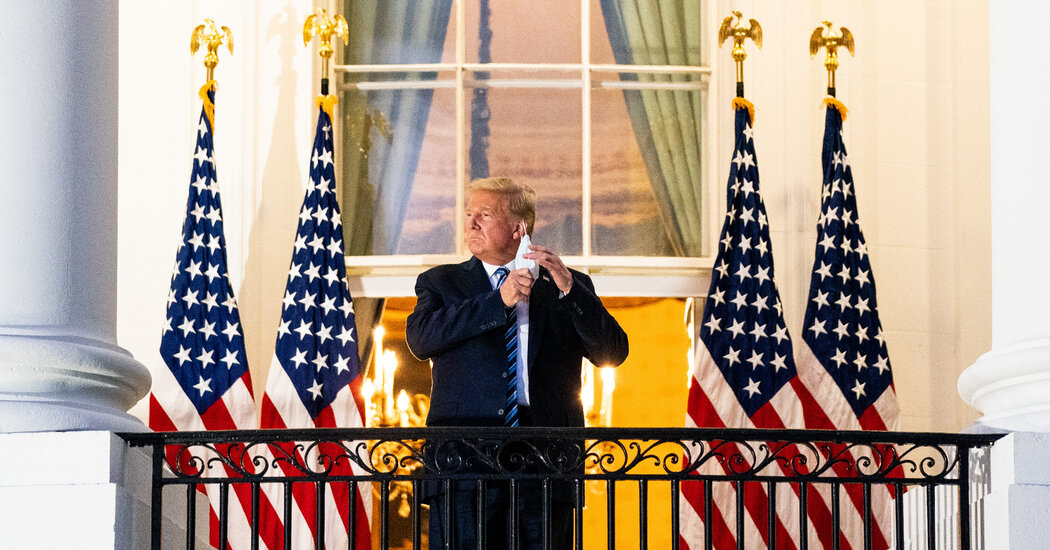 A day after exhorting Americans to overcome their fear of the pandemic, an ailing President Trump cast the crisis as a state-of-mind problem on Tuesday morning, saying the country is “learning to live” with the virus — and likening it, as he has done in the past, to the flu.

Public health experts had hoped that Mr. Trump, chastened by his own infection and alarmed by the cases that have erupted among his staff members, would act decisively to persuade his supporters that wearing masks and social distancing were essential public health safeguards.

Instead, the president has continued his yearlong pattern of playing down the deadly threat, tweeting on Monday from the military hospital where he had been receiving state-of-the-art treatment for Covid-19, the disease caused by the virus.

“Don’t be afraid of Covid,” he wrote, shortly before flying back to the White House late Monday. “Don’t let it dominate your life.”

The president was back at it again first thing on Tuesday, taking to Twitter to offer a mixed message that combined the boilerplate of a public service announcement with his little-to-fear-but-fear-itself spin on a pandemic that has killed more than 210,000 Americans.

“Many people every year, sometimes over 100,000, and despite the Vaccine, die from the Flu,” he added, echoing, if not quite repeating, his earlier false claims that Covid-19 was comparable in lethality to the seasonal influenza, which experts say is much less deadly than coronavirus.

“Are we going to close down our Country? No, we have learned to live with it, just like we are learning to live with Covid, in most populations far less lethal!!!”

Upon Mr. Trump’s return on Monday evening from Walter Reed National Military Medical Center, he climbed the steps of the White House, turned to face the TV cameras that were carrying the news live and removed his mask.

He appeared to breathe with difficulty, but his respiration seemed less labored in a direct-to-camera video he taped shortly after.

The president’s comments and actions over the past few days have drawn outrage from scientists, ethicists and doctors, as well as from some people whose relatives and friends have died. They come about a month after the journalist Bob Woodward disclosed that Mr. Trump knew the virus was far more deadly than the flu soon after the pandemic emerged as a national threat this spring.

Dr. William Schaffner, an infectious disease specialist at Vanderbilt University Medical School in Tennessee, called the president’s message “dangerous” because it encouraged his followers to ignore basic recommendations to keep themselves safe.

“I am struggling for words — this is crazy,” said Harald Schmidt, an assistant professor of medical ethics and health policy at the University of Pennsylvania. “It is just utterly irresponsible.”