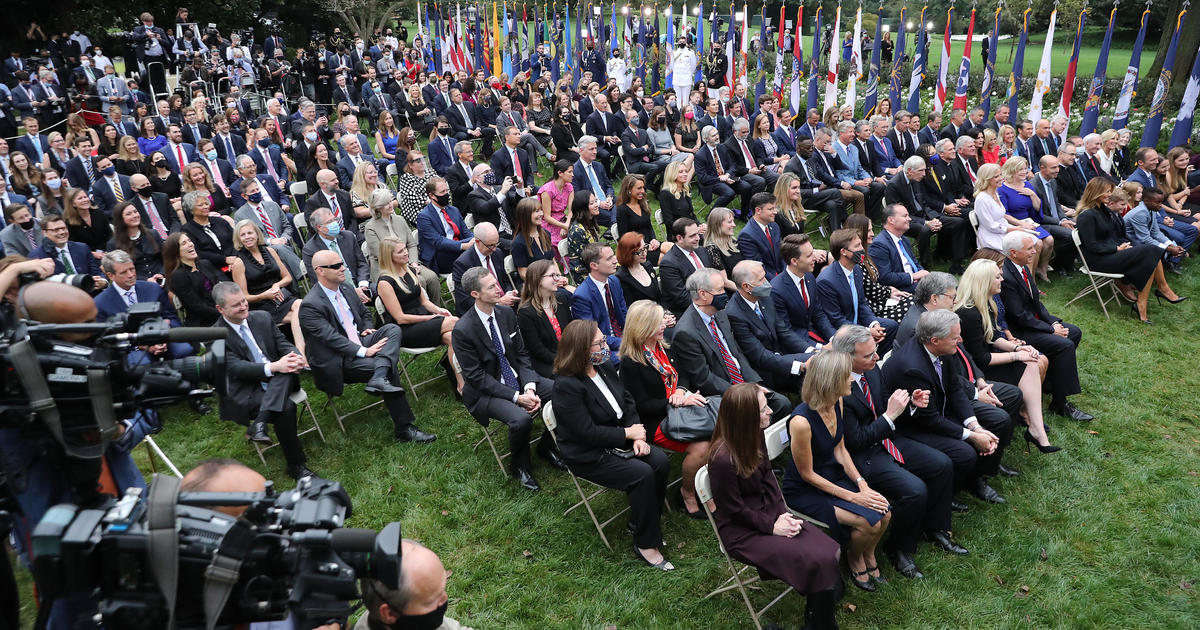 At least eight people who have tested positive for coronavirus were in attendance at the Supreme Court nomination ceremony at the White House last weekend. The number of people in President Trump’s circle who tested positive for the virus is growing, following news of the president and first lady’s positive diagnoses early Friday morning.

On Saturday, September 26, Mr. Trump nominated Judge Amy Coney Barrett to replace the late Justice Ruth Bader Ginsburg on the Supreme Court. He held an outdoor ceremony at the Rose Garden, which was attended by about 200 people — many of whom were not wearing masks or following social distancing guidelines. There are also photos of some of the attendees inside the White House on Saturday.

There is now growing concern that Mr. Trump contracted the virus at the ceremony, which could have possibly been a “super-spreader” event. Photos from the event show that chairs were not socially distanced, with many of the people who have tested positive sitting in close proximity.

Barrett tested positive for the virus over the summer and has since recovered, The Washington Post reports.

Lee, who was seen at the event hugging and kissing attendees without a mask, tweeted Friday that he had “symptoms consistent with longtime allergies” and would spend 10 days in isolation. Tillis, who did wear a mask, tweeted that he experienced no symptoms and will also isolate for 10 days.

GOP Senator Ron Johnson, whose positive COVID-19 diagnosis was announced Saturday morning, did not attend Saturday’s event. He is the third Republican senator to test positive for the virus in two days.

Neither Lee nor Tillis gave a reason why they had chosen 10 days to self-isolate, instead of the recommended 14 days, but it would allow them to attend the hearings.

Mr. Trump was flown to Walter Reed National Military Medical Center on Friday less than 24 hours after announcing he and first lady Melania Trump tested positive for COVID-19. It’s the most serious health crisis a president has faced since President Ronald Reagan was shot in 1981.

The White House physician said Friday night the president is “doing very well” and has not required supplemental oxygen. He said Mr. Trump started treatment with remdesivir, a drug that has shortened the recovery time for some patients with the virus.