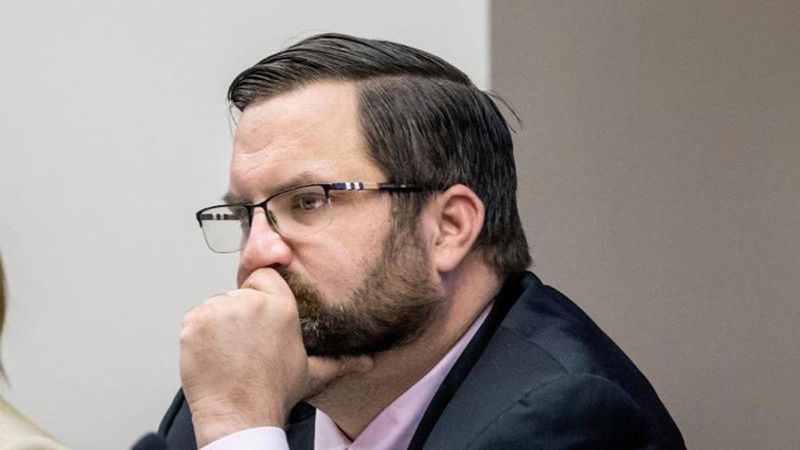 The doctor studied an X-ray of Chris Latvala’s lungs and quizzically turned to his patient.

“How long have you been a smoker?”

Latvala does not smoke. He had the coronavirus.

Latvala, a Republican state representative from Palm Harbor, arrived at Largo Medical Center on Aug. 29. By then, the infection had turned his lungs against him and a two-week internal war was underway. His whole body ached. He lost his sense of smell. He couldn’t eat. His chest felt like a truck was sitting on it. His oxygen levels plummeted.

It was, he wrote on Facebook on Sept. 4 from his hospital room, “the hardest thing I have ever faced in my life.”

Latvala left the hospital nine days later but remained quarantined at home for the rest of the month. It wasn’t until this week that Latvala ventured out in public again, a freedom he regained just as the biggest news of the 2020 presidential campaign broke.

On Friday, President Donald Trump became the most notable Florida politician — and the most famous person in the world — to announce testing positive for the coronavirus. He has since received treatment from a team of doctors at Walter Reed Medical Center in Maryland and has begun a critical 48 hours of care, according to Mark Meadows, the White House chief of staff.

In a Saturday interview with the Tampa Bay Times, Latvala recalled the early stages of his battle.

A doctor promised the hospital would provide the best treatment it could, but asked Latvala for one promise.

“You have to promise if you get worse, you’re not going to give up.”

Latvala never lost consciousness during his his 14 days over two stints in the hospital — a blessing, he said, that allowed him to avoid darker thoughts.

For him, the hardest moments came waiting for what was next.

“The doctor tells you Day 13 and Day 14 are the worst,” Latvala said. “And you’re counting down to those days and you’re wondering, ‘What does worse feel like?’ ”

Outside Walter Reed on Saturday, Trump’s physician, Dr. James Conley, told reporters that the president was in the third day of his diagnosis and that Days 7 through 10 “are the most critical.”

Trump already had symptoms that Latvala did not experience early in his battle with the virus, such as fatigue and congestion. Trump reportedly received oxygen at the White House on Friday before he was taken by helicopter to the hospital, something Latvala didn’t need until later in his hospital stay.

Trump is being treated intravenously with remdesivir, an antiviral medication that has produced promising results. From his own experience with the drug, Latvala said he knows that it requires at least five days of hospitalization while it’s administered.

At age 74, Trump belongs to a higher-risk population than Latvala, who is 38. Like Trump, Latvala is heavyset but otherwise didn’t have any other known health problems. Trump has elevated cholesterol and made a previously unannounced visit to Walter Reed last year that wasn’t fully explained.

Trump is reportedly working while he is under the watch of physicians and has met with Meadows several times throughout the weekend.

Latvala’s only visitors were nurses and doctors; family and friends were not allowed. Latvala instead enjoyed one of Trump’s favorite past-times: television.

“But you can’t watch anything funny because it hurts to laugh and you don’t want to watch the news because it’s all about COVID,” Latvala said. “So I would watch sports or true crime shows.”

Latvala is largely recovered, though he now gets fatigued in the evenings. Meanwhile, Trump campaign officials say they hope the president can return to the trail. The election is in 30 days.

Latvala said he let his guard down one night in mid-August. He planned a dinner with some friends. They drove together. His removed his mask while they ate. A few days later, he found out one of his companions had the coronavirus.

Florida has seen 715,000 coronavirus cases and the state has reported 14,803 deaths. Since the March arrival of the pandemic, at least five state lawmakers, including Latvala, have contracted the virus. So has the state’s secretary of corrections, Mark Inch, and one of his top deputies. Two Florida congressmen, Reps. Neal Dunn and Mario Diaz-Balart, tested positive as well.

Florida was later than most states in closing down bars, restaurants, schools and businesses. Following Trump’s lead, Republican Gov. Ron DeSantis began the phased reopening of Florida in May and declared the state a coronavirus success story.

By mid-summer, however, cases surged and in August, the average daily death toll peaked, surpassing 150 for three straight weeks. Latvala contracted the virus during this period.

Latvala, first elected in 2014 to the 67th District in north Pinellas, laments that face masks turned into a partisan issue and conceded that Trump “said some things early on about COVID going away that he probably shouldn’t have.” (On Feb. 22, Trump said, “It’s going to disappear. One day — it’s like a miracle — it will disappear.”)

But Latvala said he doesn’t second guess other decisions Trump has made in dealing with the virus, even as health experts say the president fostered an environment and promoted policies conducive to the spread of the virus.

“Me getting COVID is no one’s fault,” said Latvala, who plans to vote for Trump this election. “Whether that’s the president or my friend who was positive that I had dinner with. Never once have I blamed them for it.”

Latvala said he hopes the experience will make him a less aggressive partisan. He said he has a greater appreciation for faith and family. He thinks Trump will emerge from this changed, though he acknowledged that would be a pretty unlikely character shift for the president.

“When you’re laying in a hospital bed, you have a chance to do a lot of thinking, and you think about your own mortality and what’s important in life,” Latvala said. “When I had dark days in the hospitals, it wasn’t politics I was thinking about. Or the next election.”