President Donald Trump and first lady Melania Trump have tested positive for COVID-19 and “will begin our quarantine and recovery process immediately.”

The American public deserves clear and accurate details about the health of the nation’s commander in chief.

Hours after Donald Trump announced via Twitter that he and First Lady Melania Trump had tested positive for COVID-19, a top aide refused to answer crucial questions about the president’s treatment for a disease that this year has killed more than 1 million people worldwide.

White House Chief of Staff Mark Meadows also wouldn’t disclose when a key adviser who was in close contact with Trump had been diagnosed with the coronavirus. Instead, Meadows, acknowledging that Trump was experiencing “mild symptoms,” described the president as in “good spirits” and “energetic.”

White House Press Secretary Kayleigh McEnany refused to answer questions about the kind of COVID-19 test Trump was given. She also wouldn’t describe the president’s symptoms.

The Trump administration’s lack of transparency about the commander in chief’s health is unacceptable.  Americans deserve clear, accurate details about their president’s medical condition. This is not the time for optics or political spin.

Trump’s diagnosis comes at a critical time, with Election Day a month away. His administration and the nation continue to struggle with the COVID-19 pandemic and the economic recession that it triggered. We are in a deep crisis as a nation, and uncertainty about the president’s health only adds to the fears and concerns so many Americans carry with them each day.

Trump is in high-risk groups

Because of his age and weight, Trump lands in two high-risk categories for developing severe COVID-19 disease, hospitalization and death. Some projections have put the odds of death for an infected septuagenarian in the mid to upper single digits as a percentage. The odds of hospitalization are about 20%.

Trump’s health as he battles a virus that has killed more than 206,000 Americans cannot be minimized or mischaracterized as a private issue. Americans must be confident that the leader of the free world is physically able to carry out his duties.

That trust comes only if credible medical personnel — not White House officials — offer fully transparent details about his condition, including specific symptoms, medications and the treatment regimen. 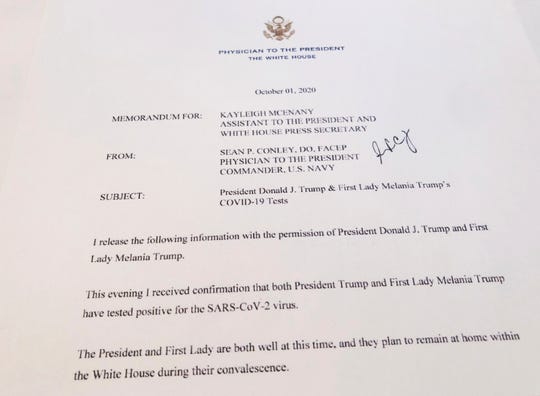 This shows a White House memorandum released Thursday, Oct. 1, 2020 by the Physician to the President, confirming that both President Trump and first lady Melania Trump have tested positive for the SARS-CoV-2 virus. (Photo: Wayne Partlow, AP)

After all, this White House has been less than forthcoming about Trump’s health in the past. An unexpected trip to Walter Reed National Military Medical Center in November raised questions about the president’s well being then. Trump’s doctor characterized the visit as “routine” and “preventative,” adding that the president was not evaluated for “any urgent or acute issues.” But officials did not provide the public with any other information.

And while campaigning in 2015, Trump’s doctor made a ludicrous assertion, writing that he could state “unequivocally,” that Trump, if elected, “will be the healthiest individual ever elected to the presidency.”

Give us more information now

The fact that Trump has now contracted what can be a fatal disease requires a constant stream of information and updates while he is quarantined and convalescing. It appears the White House is experiencing an outbreak within its halls; Americans need to immediately know when every official and visitor tests positive.

Sadly, the president’s team is off to a poor start. They did not voluntarily disclose that Hope Hicks — one of Trump’s closest advisers who traveled to Cleveland with the president Tuesday for the first presidential debate — was the first to test positive among Trump’s circle. Instead, Bloomberg News broke the news about Hicks. 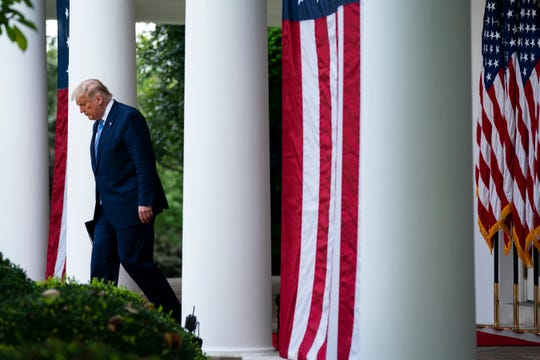 Trump himself has downplayed the effects of COVID-19 and recently argued — contrary to all evidence — that an end of the pandemic was in sight.

America is still in the thick of a pandemic that has claimed far too many lives. It’s time for the administration to disclose detailed and accurate information, both about the spread of the virus and about Trump’s condition.

How is the president’s health today?

Americans don’t need spin as an answer. We don’t need deflection or fluff.

We need the truth.

National columnist Suzette Hackney is a member of USA TODAY’S Editorial Board. Contact her at [email protected] or on Twitter: @suzyscribe