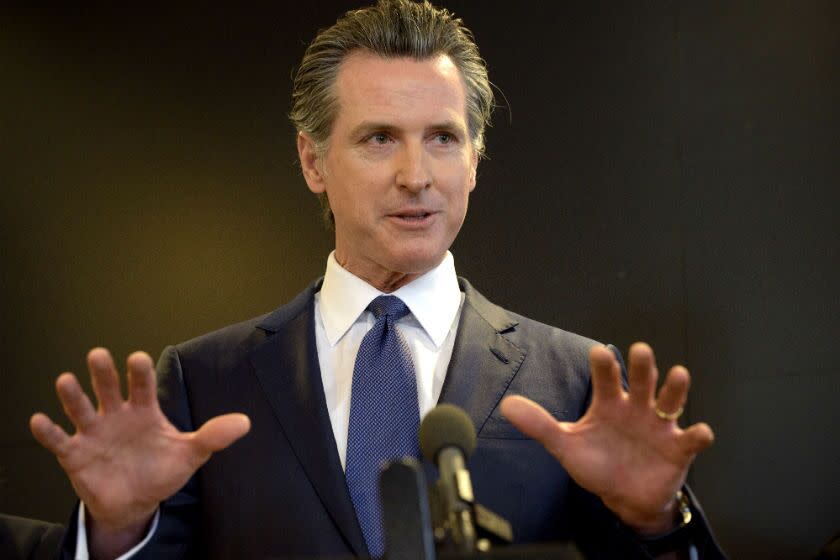 By practically every metric, California is steadily beating back the coronavirus pandemic. But officials are watching data that could suggest a second surge of the virus is on the way, Gov. Gavin Newsom said Monday.

As COVID-19 test positivity rates, hospitalizations and deaths have fallen, more than half of California’s counties have been allowed to reopen some indoor business operations. Health officials are now watching as a lesser-known metric that signals how quickly the virus is spreading has “crept back up,” Newsom said.

The metric, called the effective transmission number, represents the average number of people who are infected by each person with COVID-19. A rate under 1 means COVID-19 cases will fall over time, while a rate over 1 means cases will increase, experts say.

In Los Angeles County, the figure is 1.02, suggesting there may be an uptick in COVID-19 cases, officials said. But the region has avoided a significant surge in cases after Labor Day weekend, said Barbara Ferrer, head of the county’s Public Health Department.

“Our businesses have suffered,” said Banning, Calif., Mayor Daniela Andrade at a media briefing Monday morning. “We have empty storefronts. Some will never be reopened again. The economy is suffering hugely.”

The complaint has become a familiar drumbeat for the Golden State, as officials try to strike a balance between preventing the spread of the deadly virus and allowing business owners, workers and students to return to normal life.

A month ago, Newsom announced a new four-tier reopening plan that requires counties to show consistent progress in slowing the transmission of the virus before businesses can reopen or in-person instruction can resume in schools.

The rankings — purple, red, orange and yellow — measure the COVID-19 risk in each county and are used to determine which businesses and schools can resume indoor operations.

Newsom said 13 California counties have left the most restrictive tier, purple, over the last month. He said a “number of counties” will be shifted into less restrictive tiers when health officials announce new data Tuesday.

The purple tier keeps most nonessential businesses closed. Los Angeles County will remain there until new coronavirus cases fall below seven per 100,000 residents per day for two consecutive weeks.

In the red tier, schools can reopen. Restaurants, gyms, salons, movie theaters, places of worship, libraries and other establishments can operate indoors with reduced capacity. But others, including bars and breweries that don’t serve food, must remain closed.

That distinction has drawn criticism from elected officials and business owners, who say it is unfair to allow some businesses to reopen and not others.

San Diego County Supervisor Jim Desmond said Monday that Newsom was “punishing businesses” that have not been allowed to reopen. After weeks of low case counts, San Diego was promoted to the red tier and allowed to reopen some indoor businesses. But virus cases are rising again, driven by an outbreak among nearly 1,000 students at San Diego State University.

“All businesses should have the same opportunity to open up safely,” Desmond said. “It shouldn’t be some businesses can and some can’t.”

Riverside County was moved from the purple tier to the red tier last week. The county’s supervisors also voted last week to set their own timeline for reopening, separate from the state guidelines. Newsom has threatened to cut funding to counties that don’t comply with the state’s COVID-19 guidelines, and the decision could cost the county $28 million to $656 million in state funds, the county’s chief executive officer said.

After moving to the red tier three weeks ago, Orange County will probably be promoted again Tuesday to the orange tier, which means the risk of coronavirus infection is moderate, health officials said.

That would allow bars and breweries without kitchens to resume outdoor service. Grocery stores and libraries could return to full capacity. Restaurants, movie theaters and places of worship would be allowed to increase indoor capacity from 25% to half, or 200 people, whichever is less.