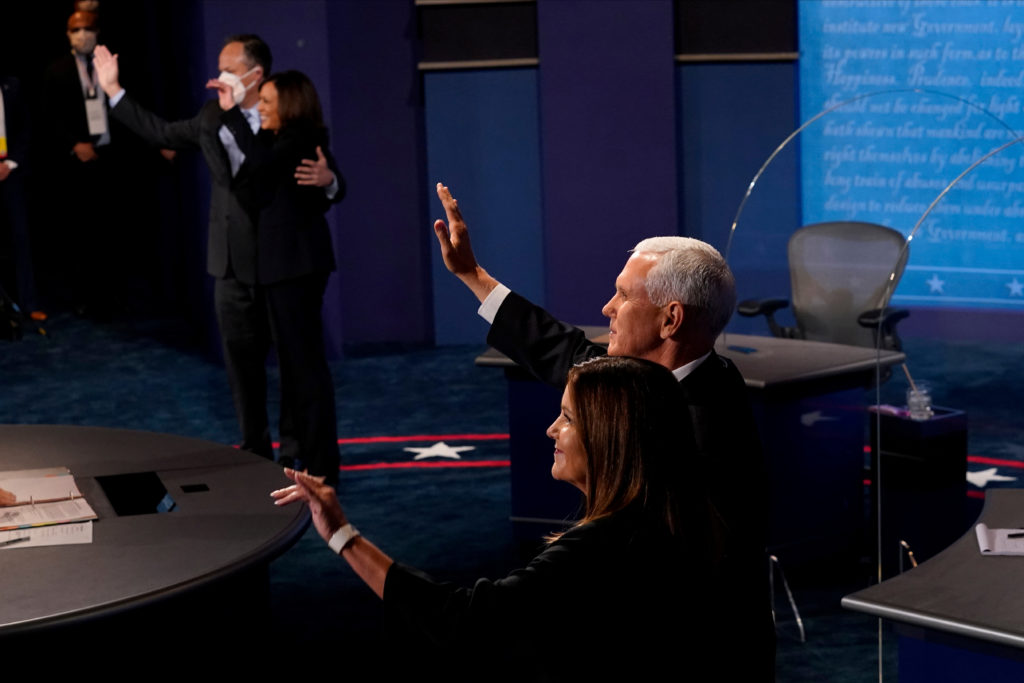 WASHINGTON (AP) — Vice President Mike Pence and Sen. Kamala Harris tussled Wednesday in the first and only vice presidential debate before the Nov. 3 election, coming as the coronavirus sidelined President Donald Trump at the White House.

A look at how the running mates’ statements from Salt Lake City stack up with the facts:

PENCE: “Joe Biden wants to go back to the economic surrender to China, that when we took office, half of our international trade deficit was with China alone. And Joe Biden wants to repeal all of the tariffs that President Trump put into effect to fight for American jobs and American workers.”

THE FACTS: The tariffs were not the win claimed by Pence.

For starters, tariffs are taxes that consumers and businesses pay through higher prices. So Pence is defending tax increases. The tariffs against China did cause the trade deficit in goods with China to fall in 2019. But that’s a pyrrhic victory at best as overall U.S. economic growth slowed from 3% to 2.2% because of the trade uncertainty.

More important, the Trump administration has not decreased the overall trade imbalance. For all trading partners, the Census Bureau said the trade deficit was $576.9 billion last year, nearly $100 billion higher than during the last year of Barack Obama’s presidency.

THE FACTS: No, that’s not what Biden proposes. He would repeal some of it. Nor can he repeal a law on his own, much less on his first day in office. Harris also said Biden will not raise taxes on people making under $400,000. If he were to repeal the Trump tax cuts across the board, he would be breaking that promise.

HARRIS: “The president said it was a hoax.”

She’s referring to a Feb. 28 campaign rally in South Carolina in which Trump said the phrases “the coronavirus” and “this is their new hoax” at separate points. Although his meaning is difficult to discern, the broader context of his words shows he was railing against Democrats for their denunciations of his administration’s coronavirus response.

“Now the Democrats are politicizing the coronavirus,” he said at the rally. “You know that, right? Coronavirus. They’re politicizing it.” He meandered briefly to the subject of the messy Democratic primary in Iowa, then the Russia investigation before returning to the pandemic. “They tried the impeachment hoax. … And this is their new hoax.”

Asked at a news conference the day after the rally to clarify his remarks, Trump said he was not referring to the coronavirus itself as a hoax.

“No, no, no.” he said. “‘Hoax’ referring to the action that they take to try and pin this on somebody, because we’ve done such a good job. The hoax is on them, not — I’m not talking about what’s happening here. I’m talking what they’re doing. That’s the hoax.”

PENCE, on the Sept. 26 Rose Garden event after which more than 11 attendees tested positive for COVID-19: “It was an outdoor event, which all of our scientists regularly and routinely advise.”

The U.S. Centers for Disease Control and Prevention says large gatherings of people who have traveled from outside the area and aren’t spaced at least 6 feet apart pose the greatest risk for spreading the virus.

Guests were seated close together, not 6 feet apart, in rows of chairs outside. Many were captured on camera clapping backs, shaking hands and talking, barely at arm’s length.

The CDC also “strongly encourages” people to wear masks, but few in the Rose Garden wore them. There was also a private reception inside the White House following the Rose Garden ceremony, where some politicians, including North Carolina Republican Sen. Thom Tillis, who has since tested positive, were pictured not wearing masks.

PENCE: “The both of you repeatedly committed to abolishing fossil fuel and banning fracking … President Trump has made clear we’re going to continue to listen to the science” on climate change.

At a CNN climate change town hall for Democratic presidential candidates last year, Harris said, “There’s no question I’m in favor of banning fracking. Starting with what we can do from Day One on public lands.” Now, as Biden’s running mate, she is bound to his agenda, which is different.

Biden has an ambitious climate plan that seeks to rapidly reduce use of fossil fuels. He says he does not support banning hydraulic fracturing, or fracking, however, and says he doubts such a ban is possible.

As far as Trump and climate change, Trump’s public comments as president all dismiss the science on climate change — that it’s caused by people burning fossil fuels, and it’s worsening sharply. As recently as last month, Trump said, “I don’t think science knows” what it’s talking about regarding global warming and the resulting worsening of wildfires, hurricanes and other natural disasters. He’s mocked the science in many public comments and tweets.

PENCE: “President Trump and I have a plan to improve health care and to protect preexisting conditions for all Americans.”

THE FACTS: There is no clear plan. People with preexisting conditions are already protected by the Obama-era Affordable Care Act, and if the Trump administration succeeds in persuading the Supreme Court to overturn it, those protections will be jeopardy.

More on the virus

PENCE: “He suspended all travel from China, the second-largest economy in the world. Joe Biden opposed that decision, he said it was xenophobic and hysterical.”

THE FACTS: Trump’s order did not suspend “all travel from China.” He restricted it, and Biden never branded the decision “xenophobic.” Dozens of countries took similar steps to control travel from hot spots before or around the same time the U.S. did.

The U.S. restrictions that took effect Feb. 2 continued to allow travel to the U.S. from China’s Hong Kong and Macao territories for months. The Associated Press reported that more than 8,000 Chinese and foreign nationals based in those territories entered the U.S. in the first three months after the travel restrictions were imposed.

Biden has accused Trump of having a record of xenophobia but not explicitly in the context of the president’s decision to limit travel from China during the pandemic. Trump took to calling the virus the “China virus” and the “foreign virus” at one point, prompting Biden to urge the country not to take a turn toward xenophobia or racism in the pandemic.

HARRIS, on the effects of the pandemic: “One in five businesses, closed.”

THE FACTS: That’s not accurate, as of now. We don’t know yet how many businesses have permanently closed — or could do so in the months ahead.

What we do know is that the National Federation of Independent Business said in August that 1 in 5 small businesses will close if economic conditions don’t improve in the next six months.

Many small businesses survived in part through the forgivable loans from the Payroll Protection Program. Larger employers such as Disney and Allstate insurance have announced layoffs, as have major airlines. Restaurants that survived the pandemic with outdoor eating will soon face the challenge of cold weather. So it’s too soon to tell how many businesses have closed or will.