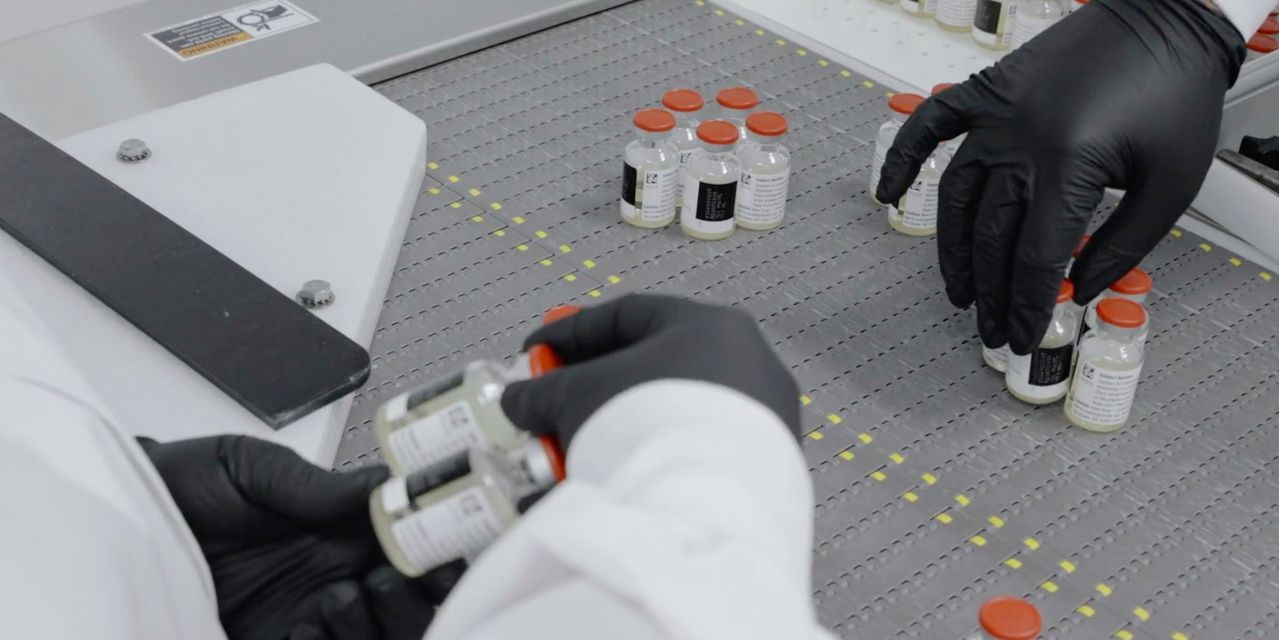 President Trump’s endorsement of an experimental Covid-19 drug from

has raised expectations for a type of medicine that could be authorized for public use within weeks or even days.

Regeneron is racing against rival

to bring the first monoclonal antibody drug on the market to treat Covid-19 patients who aren’t sick enough to be hospitalized. Both companies said Wednesday they had asked the U.S. Food and Drug Administration to authorize use, and they had already made tens of thousands of doses for patients.

If greenlighted, the shots would begin to fill a big hole in the Covid-19 medicine chest for treatment of early and less-severe cases. After more testing, they could offer temporary protection against infections until vaccines arrive. But supply is unlikely to meet demand until next year at the earliest.

Monoclonal antibodies, which are also used to treat cancer and other diseases, take a page from the body’s own soldiers for fighting pathogens. Both Lilly and Regeneron researchers derived their drugs from naturally occurring Covid-19 antibodies.

Each of the companies has released encouraging data from early-stage clinical trials showing their drugs helped reduce coronavirus levels and improve symptoms in patients not sick enough to be hospitalized. Lilly and Regeneron have already started studies to see if their antibody drugs can prevent Covid-19.

Given the urgent need, the companies asked the FDA to use a special review process reserved for emergencies such as pandemics and authorize use before the therapies have finished all the stages of testing normally required for approval.

The FDA could issue the go-ahead for the monoclonal antibody drugs as soon as Friday, SVB Leerink analyst Geoffrey Porges said. The agency could feel comfortable making a quick decision, he said, because it is already familiar with the way antibody drugs work, having approved many of them over the years to treat other diseases.

The FDA declined to comment about its review of the applications or the timing of a decision.

The agency has granted emergency-use authorizations for two therapies for hospitalized Covid-19 patients, the antiviral remdesivir from

and antibody-rich convalescent plasma taken from recovered coronavirus patients. An antibody drug could be the next agent to be permitted for use.

Last Friday, Mr. Trump was given a high dose of Regeneron’s drug, code-named REGN-COV2, under a program that allows patients to take experimental drugs outside of clinical trials. He was later given the antiviral drug remdesivir, which the FDA authorized in May, and the already approved steroid dexamethasone.

Mr. Trump’s doctors have said he is symptom free. In a video released late Wednesday, the president attributed his return to health to Regeneron’s drug.

“They gave me Regeneron, and it was like, unbelievable. I felt good immediately,” he said. Independent doctors have cautioned against singling out any specific factor for Mr. Trump’s feeling better, or even concluding he has recovered, given the unpredictable course of the disease and various care he received.

“The president’s team of medical consultants and advisers all thought that for a person in his position, they saw the benefit-risk equation, and they thought that this might be a reasonable thing to do,” George Yancopoulos, Regeneron president and chief scientific officer, said in a recent interview. “I think it means that there’s going to be a lot of other people who come to that conclusion.”

Mr. Trump also said he encouraged the authorization of antibody drugs and would make sure patients wouldn’t have to pay for them.

Companies normally don’t request the FDA’s clearance of a drug until they have discussed the matter with the agency and believe they have the kind of data that could secure a regulatory green light. The agency will, nevertheless, sometimes refuse to approve a drug after reviewing the application, or ask for more testing.

Administration officials could take the reins from the agency, as they did in 2011 when Health and Human Services Secretary Kathleen Sebelius overruled an FDA decision to make an emergency contraceptive broadly available, including to young teenagers.

Regeneron and Lilly said they didn’t know how long the FDA would take to review the requests for authorization. Lilly has been working with FDA reviewers for several months at a fast pace, company executives said, and they expect that clip to continue.

Both companies said they have been making doses. Regeneron said it has enough supply to treat 50,000 patients right now, and for a total 300,000 patients within a few months. Lilly said it would have 100,000 doses by the end of this month, and as many as a million by year’s end.

The supply probably won’t be enough to give the drugs to everyone who could take it. More than 44,000 Americans were diagnosed with Covid-19 on average each day over the past week, according to Nephron Research, a health-care-focused investment research firm.

“We just know that supply isn’t going to meet the needs of people around the world” initially, Lilly’s chief scientific officer, Daniel Skovronsky, said in an interview. Lilly executives said the federal government would decide who should get initial supplies, but the company suggested people over age 65 years or who are obese should be candidates because they are at higher risk of worsening to severe Covid-19.

Regeneron would try to make sure its drug would be “distributed fairly and equitably to the patients most in need” if it is authorized, a company spokeswoman said.

To boost production, Lilly in September signed a collaboration with

Neither Lilly nor Regeneron has given a price for their therapies, though both have said they expect patients will be able to get the drugs with no or very low out-of-pocket costs. Regeneron said the U.S. government would distribute the first 300,000 doses of its drug free, because it helped fund the drug’s development.

Antibody drugs for cancer, rheumatoid arthritis and other diseases can cost tens of thousands of dollars a year or more.

Lilly Chief Executive David Ricks said in a call with reporters Wednesday that the company would consider the special situation created by the pandemic in pricing its Covid-19 drug, though it must also account for its heavy investment.

It will be hard for the drugmakers to set too high a price, SVB Leerink’s Mr. Porges said, because most patients who get the drug probably wouldn’t have developed a severe case anyway.

“If you treat 100 individuals with an expensive IV infusion to keep five from going into the hospital, it’s not a very compelling value proposition,” he said.

Mr. Trump’s endorsement of the antibody drugs, and his promise to make them available free, will likely cause many infected patients to seek prescriptions even if they aren’t showing any symptoms, Mr. Porges said. He expects insurers to triage patients by setting criteria for who can receive the medications, such as whether they have symptoms and risk factors.

PLC said Friday that it will start testing its monoclonal antibody drug in a Phase 3, or final-stage, clinical trials in the coming weeks. The drug, code-named AZD7442, combines two antibodies derived from patients who recovered after being infected by the new coronavirus.

AstraZeneca said one study will enroll 5,000 healthy volunteers to test if the drug can prevent infection for up to one year; the second study will test the drug’s effectiveness in preventing or ameliorating symptoms in 1,100 patients who have been exposed to the virus.

The U.S. government is supporting the development of AstraZeneca’s drug with $486 million. The U.S. is entitled to receive up to 100,000 doses of the drug toward the end of 2020, and the option to acquire an additional one million doses in 2021 under a separate agreement, AstraZeneca said.