Judge Amy Coney Barrett speaks at the White House after being put forward by President Trump as his nominee to fill Justice Ginsburg’s vacant seat.

The debate surrounding Amy Coney Barrett’s potential appointment to the Supreme Court has focused largely on the fate of abortion rights. But her tenure could significantly affect workers’ rights as well, experts say.

While no one can predict how justices will ultimately rule once they have a seat on the nation’s highest court, their past records offer a meaningful window into how they interpret the law. And in cases ranging from harassment on the job to debt collection, Barrett’s opinions have often tilted toward bosses and business.

“Through her record on the Seventh Circuit … her rulings have favored employers as opposed to workers,’’ says Carl Tobias, a professor at the University of Richmond School of Law, referring to the 7th U.S. Circuit Court of Appeals based in Chicago.

Barrett’s appointment could have a particular influence on the most vulnerable in the workplace, says Judy Conti, government affairs director for the National Employment Law Project, a worker advocacy group. 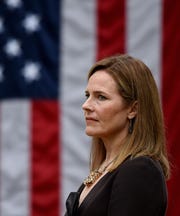 “They’re the final arbiter of whether legislation that is designed to help workers is read expansively or narrowly, and everything about her record tells me that she will view things narrowly,” Conti says. She adds that she worries that the balance of the court would tip further from the needs of people who earn lower wages and who are vulnerable to workplace abuse.

But Noah Finkel, a partner in the labor and employment department of the law firm Seyfarth Shaw, says that while Barrett will likely typically side with the five current conservative members of the bench, she will not push the court in a dramatically more right-wing direction.

“I don’t really see her as all that radical,” he says. “I don’t see her bringing a lot of change in the employment sphere. Obviously, Justice (Ruth Bader) Ginsburg is well known for some opinions that are pro-employee, but many are dissents that she offered. So ultimately what it might mean is there a 6-3 decision instead of a 5 to 4.”

Finkel added that Barrett’s record on the 7th Circuit is “fairly even-handed.” And he noted that it was Justice Neil Gorsuch, a conservative, who wrote the decision that enshrined workplace protections for the LGBT community because he stuck to the letter of the law as defined in the statute. Barrett would do the same.

“While many times that results in a pro-employer decision, it doesn’t necessarily,” Finkel says. “It could also be pro-employee. And she’s demonstrated great respect for jury decisions that are in favor of employees and has not upset those decisions.’’

In the case of Terry L. Smith vs. the Illinois Department of Transportation, a district court ruled against Smith, an emergency traffic patrol worker, who said he had dealt with a hostile work environment and was fired after he complained about being subjected to racial bigotry on the job.

In an August 2019 ruling upholding the lower court’s decision, Barrett wrote that even though Smith had been called the ‘N’ word by Lloyd Colbert, a supervisor – “an egregious racial epithet” – Smith didn’t prove that the slur caused him another type of distress or increased the stress he was already under.

“That won’t do under Title VII,” Barrett wrote, referring to the section of the Civil Rights Act that prohibits workplace discrimination based on factors like race or religion. “Without evidence that Colbert’s outburst changed Smith’s subjective experience during his last two weeks at the department, a reasonable jury could not resolve the hostile work environment claim in Smith’s favor.”

That ruling is troubling, Conti says.

“For a white woman to say a Black person hearing the ‘n’ word doesn’t change their experience at the workplace,” she says, that it “doesn’t make it subjectively hostile to that person and abusive … shows me that she is deeply out of touch with the experience that certainly Black people, and other people of color experience when they’re the victims of that sort of harassment and verbal violence.”

But Barrett has sometimes sided with workers.

The Equal Employment Opportunity Commission sued on behalf of a one-time Costco employee named Dawn Suppo, who said she endured a hostile work environment when she was harassed by a customer for more than a year.

A district court ruled in favor of Suppo, and Barrett later agreed, writing in a 2018 decision that “a reasonable jury could conclude that” the harassment “was severe or pervasive enough to render Suppo’s work environment hostile.’

Age and the workplace

In a decision that was not unanimous, Barrett joined fellow judges in ruling against a then 58-year-old attorney, Dale Kleber, who accused CareFusion Corporation of age discrimination when Kleber applied for a job that went to a 29-year-old instead.

The “disparate impact” Kleber was alleging applied to employees, not job applicants, the decision said.

“As a judge, her rulings have sided with corporations over people 76% of the time,” says Maggie Jo Buchanan, director of legal progress at the Center for American Progress.

In the case Paula Casillas v. Madison Avenue Associates Inc., Casillas filed a class-action suit against a company that was trying to collect a debt but had failed to specify that if she wanted to seek verification of what she owed, her request had to be in writing.

Barrett wrote in the June 2019 decision that Casillas did not have grounds to bring that suit based on “a bare procedural violation of the Fair Debt Collection Practices Act.”

“Casillas caught the defendant in a mistake, but it was not one that hurt her,” Barrett concluded.

“It is a fair inference from Casillas’s complaint that Madison’s omissions at a minimum put her in imminent risk of losing the many protections in the act that are designed to regulate the debt‐collection process as it goes forward,” they wrote in a dissenting opinion.

Barrett’s ruling could affect many others, Buchanan says, making “it more difficult for people to protect themselves against abusive debt collection practices.”

In her writings, Barrett has been critical of the reasoning that led Chief Justice John Roberts to cast a pivotal vote preserving the Affordable Care Act. And just two years after the act passed, she signed a petition against the law’s provision stating employers should cover birth control in their insurance offerings.

Now, one week after Election Day, the Affordable Care Act will once again be before the justices, and if appointed to the court, Barrett “might well join a majority to basically strike down what’s left of the ACA,” Tobias says.

“Not only would this mean people would have their health insurance ripped from them,” Buchanan says, “but insurers could once again charge women more just for being a woman, which could cost women $1 billion more annually than men.”

The funding of unions may also be among the issues Barrett helps decide if she gains a seat on the nation’s highest court.

In June 2018, the Supreme Court decided 5-4 that public sector workers did not have to pay the fees that fund the work of their collective bargaining units, on the grounds that such mandatory payments violated workers’ First Amendment rights.

Justice Samuel Alito Jr., who wrote the majority opinion “signaled he’s willing to consider that same rule for private-sector unions,” Conti says, “and I certainly worry about where Judge Barrett would come down on that issue should she be a member of the court.’’