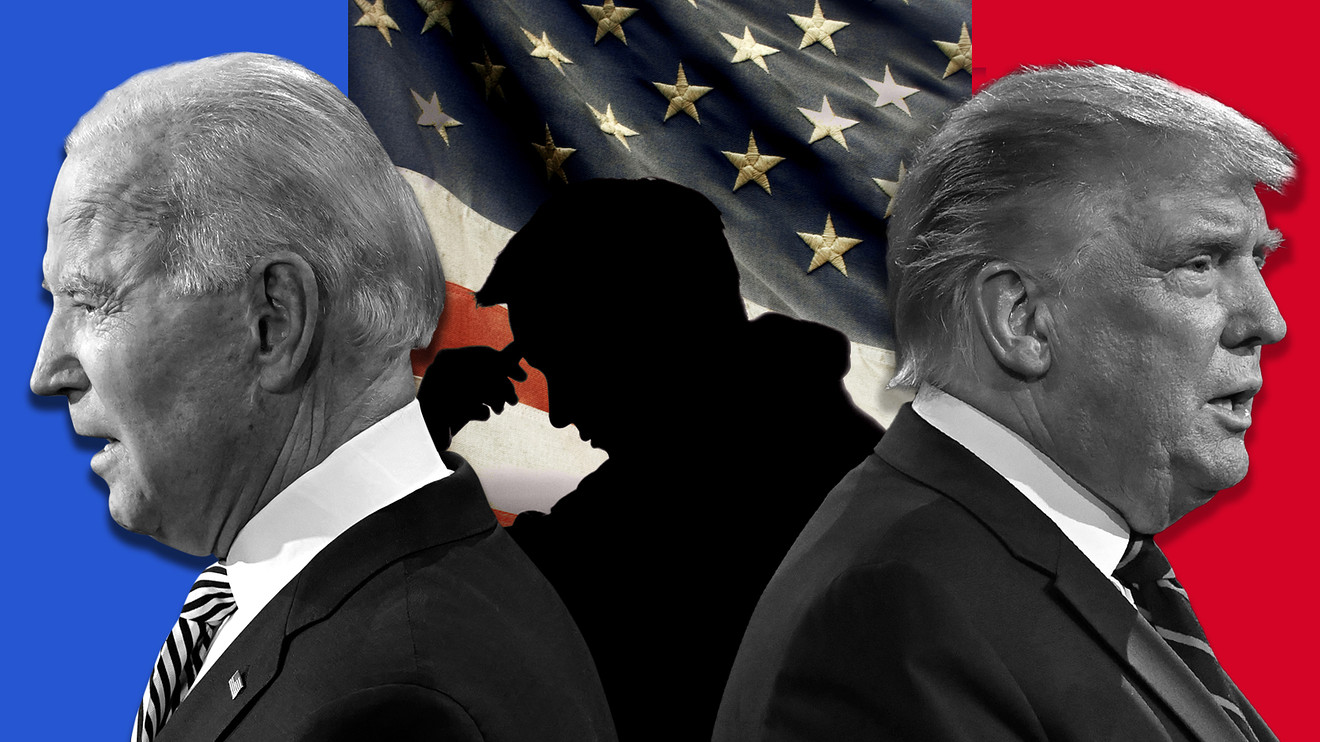 For a rancorous first debate between President Donald Trump and Democratic nominee Joe Biden, there was a whole lot that went unsaid.

Unemployment is coming off double-digit rates in the spring after government shutdowns to deal with the coronavirus outbreak, yet joblessness is still high. But the candidates didn’t delve deeply into solutions for joblessness before cross-talk reigned. The same goes for the prospect of another round of fiscal stimulus and more federal unemployment benefits.

Health care costs were another issue discussed briefly before turning into a slugfest. Meanwhile, millions of renters could be facing eviction starting next year, but interruptions — many from Trump — crowded out talk on that issue.

How about student debt, the top form of non-mortgage debt, which now stands at roughly $1.7 trillion? Zero mention.

Trump and Biden are scheduled to debate again on Oct. 15 in a town-hall format with undecided voters. Perhaps they’ll get to these critical personal finance topics then.

The most searched term on Google
GOOGL,

during Tuesday’s debate was unemployment, according to data from Google. That’s hardly a surprise given the fact that over 20 million Americans have lost their jobs during the pandemic-induced recession.

The unemployment rate has come down from 14.7% in April to 8.4% last month as parts of the economy reopened, sending millions of Americans back to work. But for the Americans who haven’t been able to return to work, enhanced unemployment benefits and stimulus checks, both of which were part of the $2 trillion CARES Act stimulus package, have been a lifeline.

By now, most Americans have spent their stimulus checks of $1,200 per person plus $500 per child. Additionally, jobless Americans are longer receiving an additional $600 a week in unemployment benefits that expired in July. Though many did receive a temporary $300 boost in benefits resulting from an executive order Trump signed.

That’s caused many Americans to cut back on spending in grocery stores.

Trump and Biden have both expressed support for a second round of stimulus checks, but the two candidates disagree when it comes to unemployment benefits.

Trump has said the $600 add-on benefit discourages unemployed workers from looking for jobs, because two-thirds of Americans received more in unemployment benefits with the extra $600 than they earned at their prior job. Biden’s economic recovery plan calls for extending the $600 benefit, more funding for nutrition and health programs, as well as more money for state and local governments, similar to the priorities House Democrats put forth in the HEROES Act.

Millions of Americans nationwide continue to face the threat of eviction as a result of the economic turmoil caused by the coronavirus pandemic. In August, researchers estimated that as many as 40 million people could be at risk of eviction in the next several months, calling it “the most severe housing crisis” in the nation’s history.

Weeks later, the Centers for Disease Control and Prevention and the Trump administration announced a nationwide moratorium on evictions. But the moratorium is not a permanent solution: It only lasts through the end of the year, at which point renters could once again be evicted for non-payment of rent if they’ve not managed to catch up on what they owe their landlords.

And because the national moratorium was not accompanied by extra funding from Congress for emergency rental assistance, renters and landlords alike are facing financial disaster. With aid, rental industry organizations have warned that small-scale mom-and-pop landlords could face foreclosure or sell their homes — and that could shrink the supply of rental housing nationwide, leaving tenants with fewer options of places to live.

Plus, the CDC moratorium doesn’t apply to all Americans automatically. Instead, renters must notify their landlord using a form that the CDC drew up to stipulate that they are protected by the order. Experts have also warned that gaps in the CDC’s order could allow for landlords to find other avenues to evict tenants, including people who have unofficial, month-to-month arrangements.

Only around 4.2 million Americans are likely to file for protection, well short of the total number of people that researchers say could be at risk of being kicked out of their homes, according to a National Association of Realtors report.

Some landlords have sought to move quickly to file for eviction against tenants in the weeks following the CDC’s announcement. At least 5,200 eviction cases have been filed by private-equity firms and other corporate landlords since Sept. 1, according to data collected by the Private Equity Stakeholder Project.

While the explosion in unemployment brought about by the coronavirus pandemic is the most immediate cause of the eviction crisis facing the country, the seeds for such an emergency were sowed well before that.

For roughly a decade now, America has not built enough new homes to keep up with the growth in the number of households nationwide. That shortage of housing has driven up not only home prices for buyers, but also rents for renters. Nearly half of all renter households were cost-burdened before the pandemic, meaning over a third of their income went toward rent, said research from the Joint Center for Housing Studies of Harvard University.

Though new reports on Trump’s tax record suggest he’s potentially on the hook for more than $400 million in debt, Trump said during the debate that he’s in good financial shape. “I’m totally under leveraged because the assets are extremely good, and I built a great company,” he said.

Meanwhile, Americans have a total $14.27 trillion in household debt as of 2020’s second quarter — and that’s actually the largest decline on record since 2013.

Within that mound of debt is the roughly $1.7 trillion in student debt, which wasn’t mentioned Tuesday night.

About 44 million Americans are coping with college debt and for many of them, that burden is delaying progress in their financial lives. For the millions of borrowers who have defaulted on their loans, the debt is putting their Social Security checks, tax refunds and wages at risk. More broadly, our nation’s debt-financed higher education system has been linked to widening racial inequality.

Momentum has been building over the past few years to cancel student debt, with Democratic Senators Elizabeth Warren and Chuck Schumer calling on the next president to cancel up to $50,000 in student debt for every borrower.

Biden has said that if elected he’ll immediately cancel $10,000 in student loans for every borrower and discharge federal undergraduate student debt for borrowers earning up to $125,000 as long as it was related to their education at a public college, a Historically Black College or university or Minority Serving Institution. He’s also vowed to make public college tuition-free for students from families earning $125,000 a year or less.

Trump hasn’t said much about what he would do to address student debt and college affordability, but his record so far offers some hints. The Department of Education under Secretary of Education Betsy DeVos has rolled back Obama-era provisions aimed at cracking down on for-profit colleges, which have been accused of luring borrowers into taking on high debt loads for degrees with little value in the labor market.

This summer the Trump administration extended the pause on student loan payments and collections that Congress implemented through the CARES Act, the coronavirus stimulus bill, through Dec. 31. The pause was originally set to expire on Sept. 30.

How much will your prescriptions and premiums cost if Trump is re-elected or Biden takes office?

The two candidates however spent a good chunk of the debate going back and forth about Obamacare, the informal name of the Affordable Care Act that overhauled the U.S. health-care system under President Barack Obama.

What they didn’t delve into were the ways to address rising premiums.

Now, the entire Obamacare program is facing another challenge in the Supreme Court from the federal government and 18 Republican-leaning states. The Supreme Court is scheduled to hear the case on Nov. 10 while Judge Amy Coney Barrett’s confirmation battle heats up.

In 2016, Trump campaigned on the promise to repeal and replace Obamacare. Trump however has not presented an alternative to the program, Wallace pointed out during the debate. Trump said he wants to give Americans “better health-care at a much lower price because Obamacare is no good,” but did provide more details as to how he’d accomplish that.

Trump said he’s cutting drug prices by “80 or 90%” but did not directly respond to Wallace’s question regarding medical costs for people with pre-existing health conditions.

Biden said that he favors expanding Obamacare while adding a public option.

Last year, income inequality grew to its widest point in 50 years, according to U.S. Census Bureau data. The pandemic — which wiped out 40% of the jobs under $40,000 from February to March — may only make matters worse, observers say.

Wages were the third-most searched issue on Google
GOOG,

during the debate, the company said. Both said talked about job creation (and their opponent’s ability for job destruction) but there was little talk about the compensation for the work. At one point, Biden did say his bid for clean energy would create “millions of good-paying jobs” above $15 an hour.

Trump emphasized he presided over decades-low unemployment before the pandemic hit.

Biden supports a $15 federal minimum wage, which is more than double the current $7.25 rate. That rate is unchanged since 2009, when Biden was the vice president in the Obama administration.