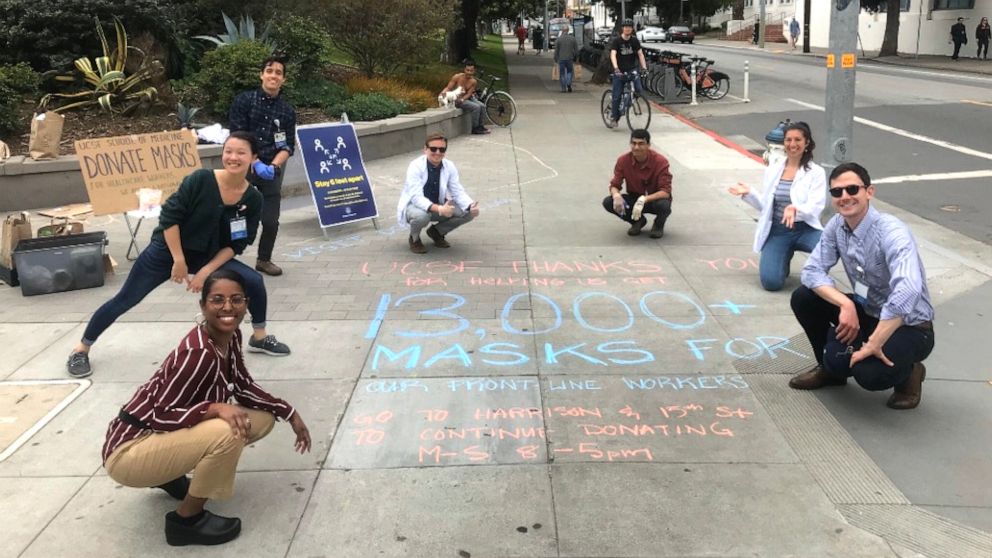 It was on a Saturday in mid-March when Abby Schiff, then a third-year medical student at Harvard working through surgery clinical rotations, found out she wouldn’t be going back to the hospital.

She had worked the day before, but with the coronavirus threat growing quickly, Schiff, like thousands of other medical students across the country, was sidelined when the Association of American Medical Colleges issued a temporary suspension of clinical rotations in hopes of protecting students and patients, and conserving personal protective equipment (PPE).

She didn’t sit around waiting, though. As nurses came out of retirement and medical school professors pressed pause on teaching to answer the call to action on the front lines, Schiff also got to work. Within hours, she and a group of other students started building a crash course on COVID-19 for medical professionals.

“At the time, a lot of Harvard medical students were talking about what was going on, and [it] felt like we suddenly had a lot of time on our hands,” Schiff told ABC News. “There was this crisis going on. How can we best contribute?”

In less than a week, 70 of Schiff’s colleagues, including students and faculty, had put together a comprehensive, open-source COVID-19 curriculum.

“So we had about 80 pages of content — all referenced, all freely available — including things like thought questions, quiz questions… helpful information about how to put on masks and PPE, run ventilators,” she said. “And then also an explainer about basic epidemiological terms, about sort of the basics of virology and immunology and the clinical manifestations that were known at the time.”

Seven months later, the curriculum is still being updated with the latest science on a regular basis. Today, it includes modules on mental health, global health and communication, all meant to “dispel misinformation and myths,” said Schiff.

As co-chair for outreach, she said her role is to reach out to students and groups that are using the curriculum to get an idea of their needs and how they can best be met, as well as recruiting students to contribute. The curriculum has already been implemented in 32 medical schools across the country as either an elective or mandatory course, and it has been translated into 27 languages and used in at least 110 countries, Schiff said.

“It’s had a really wide reach, including in areas where there are fewer resources available,” she said. “In the age of the internet, and especially when there’s something like this pandemic that’s affecting people in every single country and really just upending the structures of knowledge, it’s really important to keep information out there and available.”

“I think, in a new pandemic, all of us could become experts as quickly as the real experts, in a way, because all of us are learning about this,” Schiff added.

Like Schiff, other med students across the country were also compelled to help during what has become the world’s largest health crisis in a century. In the process, they walked away with valuable lessons in public health responses and a deeper understanding of their duty as future doctors.

Francis Wright, a third-year medical student at the University of California, San Francisco, got involved with mask drives to collect PPE for front-line workers.

“One of my classmates… texts us and he says, ‘I’m gonna go to the corner of Mission and Dolores, wear my white coat and ask for donations because UCSF has run out.’ It’s the start of the pandemic. Like, we don’t know how deadly it’s gonna be,” Wright said. “It was just like such a scary situation and he just like went out there… and it just exploded into this huge, successful PPE drive.”

By the end of the weekend, Wright said they had collected nearly 25,000 masks. Over the next few weeks, more students jumped in to help in other parts of the Bay Area.

“Those were all just purely students saying, ‘I want to help out. I want to do something,'” Wright said.

Wright said the masks drives created an opportunity for him to coordinate a partnership between two nonprofits — Health4TheWorld and DonatePPE.org — to make an international database of PPE suppliers. Health4TheWorld, he said, is still sending donated PPE to countries around the world that are struggling with the virus.

“We’ve been sending thousands of face shields to different countries in Africa,” Wright said. “They’re also working on building our network in South America, where COVID is spiking.”

Another one of Wright’s classmates, Francesco Sergi, also helped recruit volunteers for COVID-19 testing sites in the Mission District — a historically Latino neighborhood that has been gentrified — in April. With the pandemic already seeming to affect people of color disproportionately, he said the Unidos en Salud testing program was set up to guide public health interventions at a time when there was only anecdotal evidence.

“It was our goal to test everybody in that district and then use that as a proxy to estimate how much COVID-19 was impacting the Latinx community, and then also connect those folks that tested positive to care,” Sergi said.

They tested about 4,100 people in four days.

“It was not just Latinx folks. We were testing white and Black folks, and we actually tested equal numbers of Latinx and white folks, and despite that, 95% of people who tested positive were Latinx,” he said.

The program, which has since expanded to other parts of the Bay Area, led to “a focusing of efforts” to keep Latinx people in the city connected to health services as well as a program for wage assistance and housing support, particularly for those who are undocumented and hesitant to seek care, Sergi said.

He said the pandemic has increased his understanding of “the tangible ways that global warming, racism, housing insecurity and poverty impact health.”

“This is the first time that I’ve seen on such a massive scale, I’ve seen play out… the reasons why Latinx folks are so impacted by COVID-19,” he said.

Schiff, too, saw firsthand the ways in which these COVID-19 health disparities manifested while volunteering at a health clinic in hard-hit Chelsea, Massachusetts, where nearly two-thirds of the population is Latino and many are immigrants.

“Earlier on, we were doing phone follow-ups for people that had positive COVID tests but were not sick enough to be admitted to the hospital… and if anything was getting worse, then we could hopefully catch it early enough to have them go back to the hospital,” she said. “But there were often many, many people in a home or sharing the same bathroom. Often the person I was talking to who had tested positive might be trying to self-isolate in a closet with a phone charger running under the door or trying to sleep on the floor of a bathroom, which really were not ideal.”

Schiff hopes the COVID-19 curriculum she helped develop “draws attention to these situations” and encourages medical students to think about better ways to address them.

Likewise, Dr. John Davis, associate dean of curriculum at UCSF, said the pandemic as well as the incidences of police brutality around the country — such as that which led to George Floyd’s death — have given medical schools an opportunity to reflect.

“How are we really addressing disparities that exist across medicine?” he said. “In particular, across all of our communities that are suffering.”

He said the AAMC’s pause on medical students doing their clinical rotations in hospital wards and outpatient clinics allowed them to think of ways to advance their curriculum to be more “anti-oppressive.”

During that pause, UCSF’s director of technology innovations Christian Burke said the school worked to beef up its curriculum with remote learning technologies and capabilities. Today, for example, he said students can be lectured by guest speakers from all over the world and have a front-row seat in their anatomy labs.

“What we ended up with was a lot of students who actually saw a lot of benefits,” Burke said. “It wasn’t their preferred way of going through school, but being able to get to more learning experiences that were well-designed became a real plus for them.”

Davis said they’re also looking at ways to build in volunteer efforts like those that Sergi and Wright participated in and have it count toward course credit.

“Those do require particular competencies in those settings, and we can observe those, comment on them and that we can incorporate and be able to show that students are making progress toward some of their graduation goals,” he said.

Davis, an infectious disease physician who had been pulled off his duties at UCSF for a few weeks to help fight the virus, said he “loves” teaching the school’s future doctors. He also said it was “critically important” that they get involved during this time, especially if they are nearing graduation.

“As much as they can with some of us who are a little grayer, who have seen H1N1, who’ve seen the Ebola scare that happened, who’ve lived through parts of HIV when it was in its earlier days. Really being able to share with the newer generation of physicians how we respond, as physicians, to the pandemic… it’s something that, unfortunately, I think they will have to rely on sometime in the future when the next pandemic hits,” he said.

On the bright side, the pandemic has only reinforced medical students’ resolve to help those in need, Wright said.

“I think there is just a sense of responsibility,” he said. “This is why we want to be doctors, right? We want to be useful when there’s [an] infection spreading and to support the community and keep everyone healthy, however possible.”