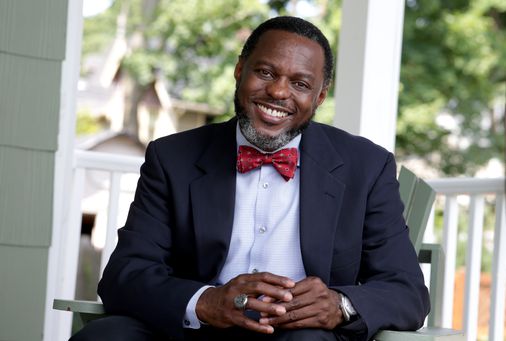 Feeling wounded and alone, Pierre decided to gather the handful of other Black men on campus and form a group dedicated to mutual support and leadership development. He couldn’t have known it then, but that notion of nurturing and promoting Black men’s skills would become a hallmark of his career.

In July, Pierre stepped up to a new platform to continue that work when he was elected as the first Black president of the Massachusetts Psychological Association, a 1,700-member professional society for psychologists.

Pierre was named president-elect in 2019, so the recent appointment wasn’t influenced by the resurgence in racial awareness sparked by the killing of George Floyd. But, as he sees it, it didn’t come a moment too soon.

Fewer than 1 percent of the association’s members are people of color, who Pierre said had not felt welcome in the organization. He wants to change that, and he also wants to inspire Black high school and college students to enter a career in psychology.

They are needed. According to the American Psychological Association, the MPA’s parent group, only 4 percent of psychologists identified as African-American in 2015, although diversity is increasing among trainees and early-career psychologists.

Meanwhile, Black people are suffering from mental distress during a pandemic that has hurt them disproportionately. Yet they tend to be reluctant to seek help for mental illnesses or don’t have access to it, and when they do, they often find themselves face to face with a white person who has no clue about their experiences.

“If someone looks like me, they understand my reality,” Pierre said. “To sit with someone who understands a client’s worldview is important, so they don’t have to explain themselves.”

Pierre’s Ashmont Counseling Associates, which he founded with his friend Dennis Tyrell in 2007, serves primarily people of color. He also practices at Carney Hospital and works as a staff psychologist at Brandeis University, where most of his clients are white.

At 53, Pierre has a trim beard salted with gray and a calm smooth face. One can easily imagine him asking a client, “So, how do you feel about that?”

But his skill as a listener is matched by his eagerness to talk about his work and life. On a recent warm day, he met a reporter on the front porch of his Dorchester house. Wearing a Brandeis T-shirt, sweat pants, and flip-flops — hot-weather attire for a man who normally prefers crisp suits and his trademark hand-tied bowties — Pierre put out a bucket of ice with water bottles, and settled into an Adirondack chair to tell his story.

Born in Trinidad, he moved with his family to the Bedford-Stuyvesant neighborhood of Brooklyn when he was 10. Gangs ran rampant at the public housing project where his family lived. But, as Pierre tells it, the gang members refused to let him get involved with their crack-dealing and theft. They knew Martin was a top student and athlete at a Catholic school — and they saw him as the one person who could make it out of the projects.

And so he did. He was accepted to Boston College and arrived on campus in 1985. The first result: culture shock.

“I was one of the few Black males on campus,” he said. “BC invited students of color on campus, but they didn’t necessarily make us feel welcome.”

He sat in the back of the classroom and cringed when all eyes would fall on him, as if he were the expert, whenever a racial issue came up.

To cope, Pierre formed the group of Black men to support each other and develop oratorical and leadership skills. He called the group the “Talented Tenth,” after W.E.B. DuBois’s notion that the smartest 10 percent of Black Americans could become leaders through education. The 12 to 15 men met weekly, with a set agenda each time, to discuss a topic in Black history or an issue in their lives or to plan events on campus.

Unlike their fellow students, many of the men were raised by single mothers and were the first in their family to go to college. “We didn’t have any role models,” Pierre said. “At that time, these young men, they were feeling lost. They weren’t doing well academically. They were feeling isolated.”

Michael Gaines, a Talented Tenth member, remembers watching a basketball game in his dorm one evening when Pierre called him. “Where are you?” he recalled his friend demanding. “You need to get down here.” Pierre was at the library and had been studying there for hours. Gaines grabbed his backpack, cursing, and joined Pierre.

It worked out well for him: After attending Harvard Business School, Gaines now works as a senior marketer for a biotech company. He said he consulted Pierre on every major life decision, and they still talk two or three times a week.

“He’s a good sounding board when you’re going through a challenge,” Gaines said. “There’s no ego, there’s no competition. What I love about Martin is you can be vulnerable with him.”

Pierre had gone to BC as a premed student, but he felt unprepared for the course work and soon found a new passion when he took a course in developmental psychology. This, he realized, was a powerful way to help people of color, “by creating a sense of liberation, liberation of the mind.”

He knew friends and family members had confronted mental health challenges. “But we never had a language for it,” he said. “We would just say we’re feeling out of sorts. It was taboo to talk about mental health issues because people would think you were crazy, and whatever happened in the home stayed in the home.”

After graduating with a bachelor’s degree in psychology, Pierre taught high school for five years before returning to Boston to earn a master’s at what was then Lesley College. He went back to BC for his doctorate in psychology.

Throughout his career, Pierre made a point of offering other Black men the mentorship that he had so missed as a student. He was still a graduate student when he noticed an undergraduate hovering tentatively outside a psychologists’ meeting. Pierre approached the man, Malcolm Woodland, and ushered him into the luncheon. Later he would coach Woodland through the process of applying to graduate school and invite him to coauthor a research paper.

Today, Woodland is chief psychologist and deputy director of social services in the Washington, D.C., Superior Court. A few years ago, a young Black man showed up in Woodland’s office. “Martin sent me,” he said. Woodland saw it was his turn to pay it forward, and he brought the student into his research lab.

In postdoctoral training and later in his own practice, Pierre often witnessed the effects of trauma, especially on Black people. At Carney, he encountered men who had been sexually abused as children but never shared their story. The resulting behavioral problems had saddled them with labels — delinquent, emotionally dysregulated, even sociopath — that never addressed the root of their problems. He wrote a script about trauma among Black men, which was made into a film, “Red Monster.”

Pierre also sees racism as a mental health issue and welcomes the healing effects of the Black Lives Matters movement.

“When they see a police officer and their heart rate increases, their anger increases, they understand that this is a normal reaction to a legacy of racism that has been inflicted upon them,” he said. “Now they have a language for it and now they feel empowered to do something about it.”